The Triumph of the Egg by Sherwood Anderson

“The Triumph of the Egg,” a story written by Sherwood Anderson depicts the struggle of a middle class family in pursuit of the American dream. The title presents a metonymy in that the egg represents the family itself, thus the whole story zeroes in on the triumph of the characters.

The story is narrated by a first person narrator, who talks about the struggles of his parents in order to make a good living and prepare for his education. From the days of childhood, the narrator witnesses the mystery of the egg’s life—the way it is hatched, raised, up to the time it is harvested.

Don't use plagiarized sources. Get your custom essay on
“ The Triumph of the Egg by Sherwood Anderson ”
Get custom paper
NEW! smart matching with writer

However, unlike other country boys, the narrator seems to despise his origins, and frequently complains about his fate and the irregularities he sees in the farm. Among those that he despises include seeing chickens mature to a “dreadful cycle,” “grotesques born out of eggs,” and the efforts his parents did to save the chickens from perils, always searching for the best cures for chicken diseases.

The narrator’s father plays a big part in the story. The narrator describes him as habitually silent and discouraged. Due to his limited interactions with people, he develops inability to express himself well in front of others. The scene with Joe Kane, one of the customers, establishes how his father makes a lousy speaker/entertainer. With limited words, his father succumbs himself to his own thoughts and the grotesque chicks that he collects. Fascinated with such irregularities, readers can say that the father lives a very lonely and hopeless life.

The mother in the story can be characterized as a strong woman. A former schoolteacher, she decides for the family more than the father, and probably dreams of his son going to a school town. She serves as the decision-maker in the family, especially regarding giving up the farm to put up a restaurant in town. With a stronger personality than the father, she serves also serves as her husband’s strength. In the story, we see the mother trying to appease the father by hand strokes on his back when the latter was crying.

The story is set in a farm in Ohio, probably in the mid 80s. Situated in the farmland, the family does not have much choice but to earn a living from the poultry products they have. When the mother decides to transfer to town, they realize how difficult it is to go astray from their origins, as the father does not have much in life, no education and no other means.

The plot of the story is simple, with events chronologically arranged initially, and unraveling with a flashback, a way the author used to present the climax. The narrator starts with the development of the characters. First, he introduces his father, mother, then himself. Such laying out of characterization helps the readers gain a good background of the people and their roles in the story. Then, the author presents the struggles the characters deal with, first with that of the narrator, then the father’s.

The theme of the story can be deduced from the struggles of the family, especially that of the father’s. In the scene with Joe Kane, the father seems to give in all his efforts to make their business succeed, but still fails. Indeed, the theme of the story zeroes in more on him, for even though he tries too hard, he ends up unsuccessful.

Thus, the aside from the struggles, the story presents the bitterness of the characters to their fate. First, we can remember that the narrator does not value his beginnings, the wisdom he learns from the mystery of the egg, then we see the mother who is dissatisfied with the poor country lifestyle, then the father who faces humiliation by not being able to carry on an interesting conversation with a customer. Just like the unhatched eggs in the farm, the family struggles with regrets.

From the theme and the experiences of the characters, we can note the essence of the title. Looking at it at first would make readers think that the family becomes triumphant at the end but the fact is, the “triumph of the egg” lies in its triumph over the people who helped hatch it. With the turn of events, the triumph of the egg could be to make the parents realize how difficult it is to chase the American dream.

The Triumph of the Egg by Sherwood Anderson. (2017, Mar 20). Retrieved from http://studymoose.com/the-triumph-of-the-egg-by-sherwood-anderson-essay 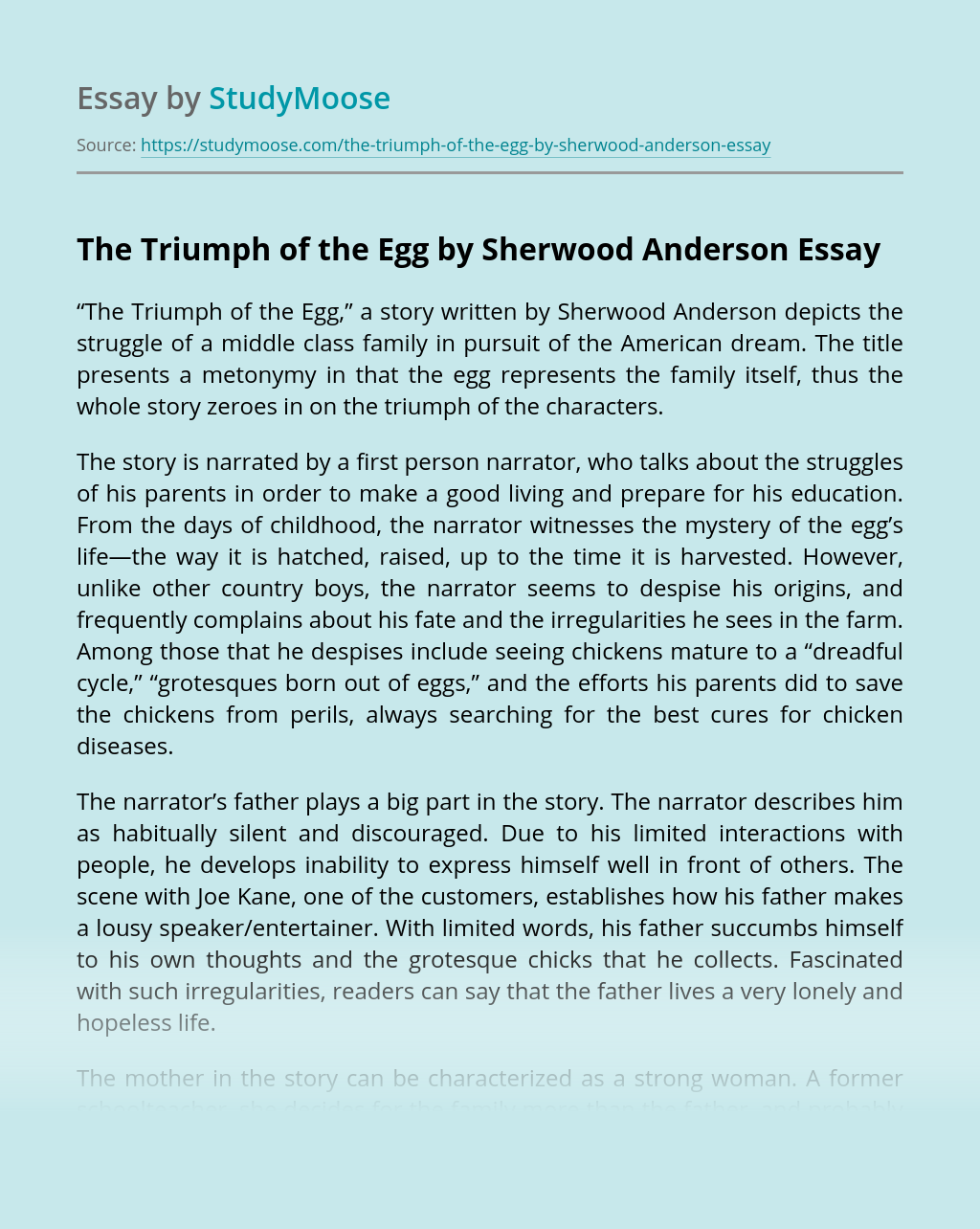