A discussion of moral responsibility in “The Great Gatsby” by F. Scott Fitzgerald.

Bang! Gatsby’s dead! George Wilson shot Gatsby! However, who is morally responsible for killing Gatsby? The obvious answer would be George since he pulled the trigger. However, it is clear, if for no other reason than for the unimportance of George in the book, that others were also partly responsible. In The Great Gatsby, by F. Scott Fitzgerald, Tom, Daisy, and George are morally responsible for the death of Gatsby.

Don't use plagiarized sources. Get your custom essay on
“ The Great Gatsby: Moral Responsibility ”
Get custom paper
NEW! smart matching with writer

Tom, because of his tattling on Gatsby, can be morally blamed for the murder of Gatsby. When George talked to him, Tom told George it was Gatsby’s car that hit Myrtle, but he failed to mention that it was Daisy driving. Even though it was never directly mentioned, it is shown that Tom knew Daisy was the one who killed Myrtle when Nick said, “…and anybody would have said that they were conspiring together,” (p.146) when referring to Tom and Daisy talking in their house.

This “conspiring” was probably a plan to get Daisy away from the whole incident. Furthermore, Tom and Daisy leave town the next day, proving Tom’s knowledge of Daisy’s guilt by just trying to escape with her. Even knowing this, Tom still had the indecency to tell George it was Gatsby’s car. Tom can also be morally blamed for the killing of Gatsby because of his affair with Myrtle. George killed Gatsby not only because he thought he killed Myrtle, but also because he was under the impression that Gatsby was the one having the affair with his wife.

Tom knew George was thinking this and when George talked to him, Tom seized his opportunity to get off the hook for his sin and directed it to Gatsby, making himself even more morally incorrect for doing it. It is clearly justifiable to blame Tom for Gatsby’s death. Daisy can also be put morally responsible for Gatsby’s death. Her bad morals relating to Gatsby’s death are displayed when Gatsby said, “Anyhow – Daisy stepped on it. I tried to make her stop, but she couldn’t…” (p.145) Daisy was not morally responsible enough to stop the car after she hit Myrtle. She would also not take the rap for driving the car later, but instead, left town. This left Gatsby in trouble because George thought Gatsby was driving the car, which partly provoked the murder. Even if George didn’t kill Gatsby, Daisy’s behavior still would have left Gatsby in trouble with the police. Daisy’s immorality in the period after she hit Myrtle lead to Gatsby’s death. A final person who can be morally blamed for Gatsby’s death is George. George’s immoral action was him killing Gatsby, inferred by the lines, “The chauffeur – he was one of Wolfsheim’s protege’s – heard the shots…” (p.162) George was morally responsible for no reason other than for pulling the trigger. Even though he was victimized by the immorality of the rich, George still had no right to put a bullet through Gatsby’s head. Murder is an immoral act no matter what the circumstances. Instead, George should have let justice take its course and have the police handle the situation. Because of him actually pulling the trigger, George is, in part, morally responsible for Gatsby’s death. Tom, Daisy and George are morally responsible for the murder of Gatsby. In every crime or wrongdoing, the moral responsibility of the outcome can be placed on at least one person. This is the person who committed the act and usually receives all the blame for it. However, often times, other individuals must take some of the moral responsibility for one of these actions. Daisy and Tom have to be given some of the blame of Gatsby’s death because of their terrible morals which caused it. 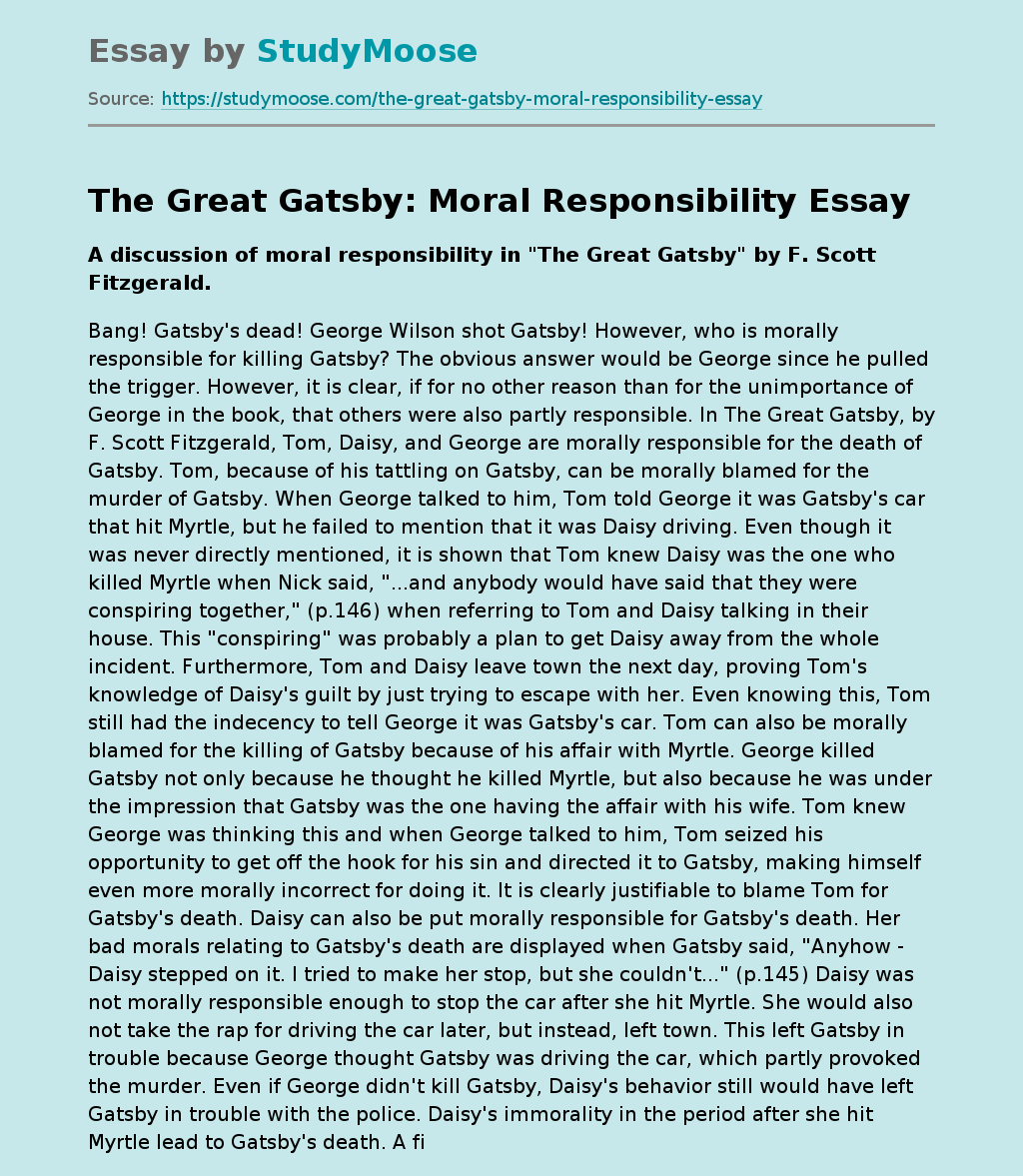