The abundance of superhero movies today is unmistakable. Movie posters bombard social media platforms, and franchises seem infinite. Contemporary pop-culture fans are entranced by stories of enhanced humans with exaggerated characteristics, and the box office numbers don’t lie: superhero movies make billions of dollars. Though these characters- that span from enhanced strength to telekinesis- are a valuable asset to movie studio executives, they also provide a service to the fans who watch them. They grant an escape from the everyday world, but more importantly, remind us all that superhero stories are great life lessons.

Don't use plagiarized sources. Get your custom essay on
“ With Great Power Comes Great Responsibility ”
Get custom paper
NEW! smart matching with writer

In fact, the infamous line, “With Great Power Comes Great Responsibility,” was the original life lesson to come out of a comic book. Today, it is synonymous with Marvel Comics’ Spider-Man.

Created by Steve Ditko and Stan Lee, the now familiar character debuted on the cover of Amazing Fantasy #15 in 1962. While that very comic was scheduled to be canceled later that year, his popularity soared immediately to the extent where Marvel could make a television show in 1963.

It was because the moment he arrived in newsstands, Spider-Man was something different. The superheroes that preceded him were overpowered, older, and lacked realism; instead of being a grown man with omnipotent powers, Spider-Man was just an everyday teenager that could connect with his readers.

Being the textbook example of a superhero at the time, Superman had an origin story that was worlds apart from his readers since very few could relate to being an alien; however, Spider-Man’s is more personal and has its faults.

After receiving his superpowers from a radioactive spider, Peter Parker’s first instinct was to become a wrestler and make money with his abilities. Rather than immediately choosing to be responsible with his powers, he inevitably made a selfish decision that directly caused the death of his Uncle Ben, leaving his Aunt May widowed and alone.

Parker is thrust into the role of the man of the house, and he initially struggles with that burden. As we continue along his journey, Spider-Man continues to struggle with his day-to-day life. He works hard at his photography job for no recognition and little remuneration. He endures as a way of honoring his uncle and he puts up with a hostile working environment to make ends meet. As a matter of fact, some readers interpret his heroic nature as his desire to make up for his sins. Nevertheless, his origin story defined his morals and introduced him as the character he still is today. In fact, this is why Marvel editors set aside an entire issue to develop Peter Parker’s transformation to Spider-Man, whereas DC Comics provided a mere four panels for Superman.

This idea of a new era of character development is how Spider-Man changed the way superheroes were written afterward. The concept of a younger hero worked so well because things went wrong for him. It’s what makes him human, a trait his readers have in common. Peter Parker lacks the wealth or superpowers that shield Batman or Superman from real-life issues. He has to catch a train if he can’t make more webs, he has to miss work if he gets injured, he will be evicted if he doesn’t pay his bills. Furthermore, Spider-Man was the down-to-earth hero in a larger universe.

With more prominent characters like The Fantastic Four and Iron Man living in New York City as well, Spider-Man was eclipsed and would become that superhero who would help out with the smaller issues, as seen in 2016’s Spider-Man: Homecoming where he is seen giving directions, returning a lost bike, and helping an old lady cross the street. As a result, Ditko and Lee’s character is relatable and the essence of Spider-Man’s realism helps sell his comic even more; he was perceived as a real person and his story seemed possible. Rather than idolize a celebrity with superpowers, readers felt like they too could be a hero like the everyday Spider-Man and that they didn’t need powers to be a part of the smaller acts of heroism.

Spider-Man has prevented the deaths of many people in his career, but the most important life he has saved was Marvel Comics. Dating back to the 1950s, superhero comics almost went extinct because they sold so poorly. Soldiers who returned from the second world war may have been the industry’s largest consumers of comics, but the grisly setting of war had changed their demand. More adult content was needed, like war and horror, so colorful comic books about superheroes began to lose popularity. Stan Lee, a war veteran himself, became Marvel’s Editor-in-Chief for twenty years following his service abroad. In the 1960s, helming Marvel, he made one last desperate attempt to save the company by making a hero more identifiable to readers and human in character: Spider-Man. And it worked. Marvel, a recent purchase by Disney, is now one of the richest movie studios and comic book companies in the world, and the superhero genre itself is one of the most popular in comics and film. In essence, those very same posters and trailers that promote the next iteration of a character are an outcome of one character’s ability to connect with his readers.

Heroic figures provide examples of idealistic behavior. Average individuals, like ourselves, aspire to be like them. They inspire us to be better, to do the right thing and to be selfless. At the same time, they are very human and relatable: they are flawed, they make mistakes. It was Spider-Man’s realism, relatability, and psychological complexity that helped redefine what is expected from comics of the era. It was a brand new take on the typical superhero. The shocking idea that superpowers won’t always improve your life, and that you can do incredible things without powers still reverberates in fans today. Spider-Man’s powers didn’t absolve him of his day-to-day problems; they enhanced them. For example, he still gets bullied but now it’s by supervillains. By being the hero everyone feels they went to High School with, Spider-Man is an immortal character. He matters because changed the perception of heroes and revived the love for great life lessons which we can get from comic books. We learn from his mistakes and successes, and as a result, we become closer to being a hero just like himself. 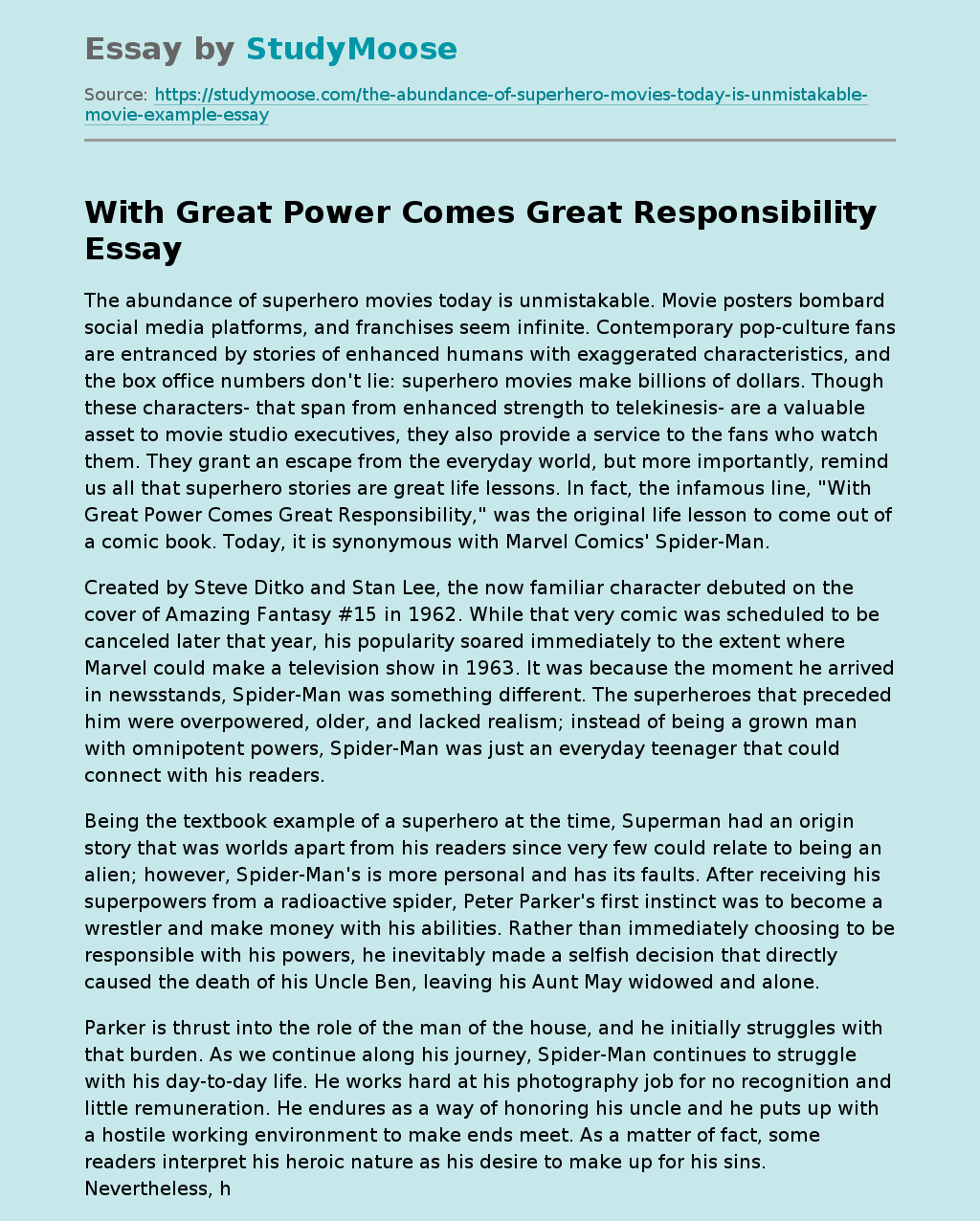