Deviance is any behavior, action, or condition that results in disapproval or hostility. It basically is the actions or mindset of human activity that violates social norms. Deviance and crime are both socially constructed, but crime is defined as committing an action that breaks the law which is punishable by both fines and imprisonment. Early theories state that criminals have a different body type than non-criminals. For example, in Phrenology, the skull configurations of deviant individuals differ from those of non-deviants, is the study of the human skull that indicates characteristics and mindset.

Deviance through modern biology is the interaction between biological and environmental factors, basically nature and nurture. It is how a human being was affected by their environment, whether it is joining gangs or mimicking bad behavior from their peers like drinking alcohol. It also can be affected by an individual’s own biology, how genes affect human behavior, genes like having no self-control of their own emotions like anger which can harm themselves and others.

Proficient in: Deviance In Sociology

Through the functionalist theory, deviance is abnormal that society wants to eliminate, but a certain amount is optimal. A certain amount enhances the sense of what is right and wrong, which prevents what is called anomie, the state of confusion that occurs when people lose sight of the shared rules and values that give order and meaning to their society. The video of an Ohio woman who drove onto the sidewalk to avoid a school bus was sentenced to hold an “idiot” sign on the exact same sidewalk she drove over.

Driving over a sidewalk in order to wait for a school bus to unload students is out of the norm, and it also has a bad influence on young students who in the future will end up driving themselves. The Ohio woman showed the wrong behavior and was later punished for it for doing wrong. The Strain theory is complicated, for example, if the response is rebellion it is rejected or substituted for both cultural goals and legitimate means. This means that if a rebellion, either a riot or a protest, happens it is rejected or changed when it denies cultural goals and legitimate means. Conflict is always a constant occurrence in a society, the class-dominant theory explains that dominant class interests determine what is labeled deviant or criminal. Dominant classes examples are the police or judges who dictate it.

Another constant conflict is feminism, society still today ignores female perspectives, analyses, and female deviant behavior. Women’s deviance is more likely to be disgraceful than compared to male behavior, for example, a woman could be labeled “slut” versus the male labeled “stud.” This causes women to be more victimized by virtue of gender, runaway teenage girls are more likely to be victims of abuse. Labeling theory is the product of labels people attach to certain types of behavior. Labels like “queer” or “whore” when certain types of behavior occur out of the norms. Primary deviance occurs when an activity is labeled as deviant and secondary deviance occurs when a person accepts the label as part of his or her identity. This ties into another concept and theory of gender sexuality.

As stated in the lecture slideshow, ”Studies show that police are more likely to pull over and frisk blacks or Latinos than whites. In New York City, 80% of the stops made were blacks and Latinos, and 85% of those people were frisked, compared to the little amount of 8% of white people stopped. In 2009, African-Americans are 21% more likely than whites to receive mandatory minimum sentences and 20% more likely to be sentenced to prison than white drug defendants and are still likely true today.” This connects to the constant occurrence of police corruption and police brutality. For example, in the Eric Garner case where he was brutally taken down and placed into a chokehold, which is banned by the NYPD, by multiple NYPD officers.

Police accused Eric Garner of deviant behavior, but they themselves committed a deviant behavior. In this case, who is labeled right and wrong? Police are socially constructed and they are to serve and protect society which is the norm, but in the case of Eric Garner, they are the ones who are committing deviant behavior or are out of the norm. Since crime is increasing, prison populations are rising and the mandatory minimum sentencing for certain crimes are being reduced by the judge according to the crime.

If an individual keeps committing crimes, they face the three-strikes laws which sentence a person to life if found guilty of committing three felonies in a lifetime. This has been becoming occurring constantly as most inmates face prison for sale or possession of illegal drugs. “War on drugs” is more likely to occur in poor neighborhoods in inner cities or the ghettos. This causes discrimination against mostly African-Americans and Latinos serving more time in prison or jail. In the beginning, the fight on narcotics, Harry Anslinger, Commissioner of the Federal Bureau of Narcotics stated, “There are 100,000 total marijuana smokers in the U.S., and most are Negroes, Hispanics, Filipinos, and entertainers. Their Satanic music, jazz, and swing result from marijuana use. This marijuana causes white women to seek sexual relations with Negroes, and entertainers and any others.” This type of deviant behavior or discrimination still occurs today even with the legalization of marijuana. 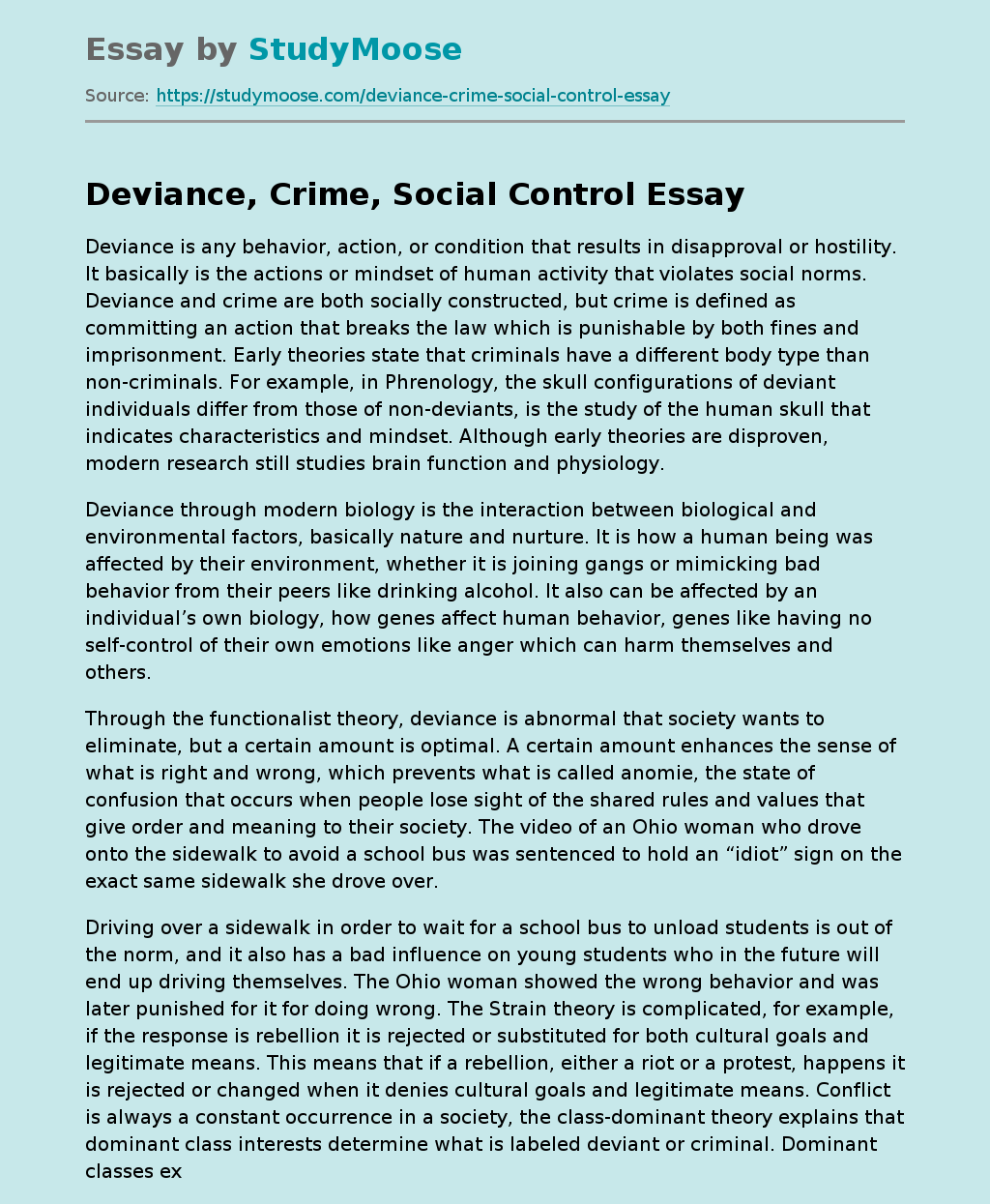