In the discussion of this work, I have divided it into three main segment . The first parts would consider the introduction which would talk about the concept of religion and that of social control. In the same section I would also consider the position of Ross as stating that religion is a more social control mechanism that enacted laws of society. The second and third part would look at how these religious elements would or can inform crime prevention and last the conclusion respectively.

Don't use plagiarized sources.
Get Your Custom Essay on Religion Is More Effective Social Control Mechanism Just from $13,9/Page

By definition religion has been defined by many scholars in various ways according to their perspectives but all seems to be pointing at one being which the belief in the supernatural. For the purpose of this work, I would go for the definition according to J. B Pratt (1920; p. 2). According to J B Pratt, religion is “the serious and social attitude of individuals and communities towards the power or powers which they conceive of as having ultimate control over their interest, and destinies”.

This definition was captured by Max Assimeng In his book “Religion and Social Change in Ghana: introduction to the study of religion”. Based on this and many of the definition on religion, I agree with Ross that religion is a more effective social control mechanism that enacted laws for society. What is social control one may ask? Social control in its broader sense is the system of maintaining law and order in society and ensuring that members of society conform to the accepted ways of behavior. (Nukunya, 1992:81).

For him, a person’s behavior is determine by the fact that he fears the wrath of the supernatural and this make him to conform to the laws of society. This belief can be supported by a verse in the Christian bible that states that “behold I come quickly and my reward is with me, to give every according to his work shall be” (Rev. 22:12). As an institution, the marriage institution was and still can be lively bringing in elements such as the traditional social control mechanism.

This is because they believe in these mechanisms such as the concept of psychic padlock and gbolomagba for instance was and can still be useful combating crimes such as infidelity and adultery as postulated by Abotchie. Thus, this belief is the believe vested in the gods and the people trusted in their powers and so send their cases to them for a verdict to be given where the offenders may be dealt with severely if found guilty.

Again religion serves as social control mechanism that enacted laws for the people in a sense and thereby preventing crimes in Ghana as it is believe that the offences committed strikes at the collective conscience of the community represented by the ancestors. Thus people would not do certain things such as destroying a clan’s totem. This action would inform crime prevention in that it would prevent people from poaching in the Ghanaian society.

Among some communities in Ghana however the people believe that committing suicide is an act of abomination which is punishable the ancestors. Also people see this suicide as associated by evil spirit and that a family with such records for instance would be refuse marriages from other families. This instance may instill into the people a sense of refraining from committing such acts. In Ross supposition, the political system of the country is also influenced by religion as a control mechanism.

For instance, before a person is elected into office, the Holy Bible or the Holy Quran IS given to the person to swear with. This is done because it is believe that the taking of the oath would compel the person to conform to the rules and regulations since the infringement of the laws would bring about inner sanctions between the individual and the supernatural. As a means of informing crime prevention in Ghana, religion provides a sense of community where people find security and safety.

This has to a large extent brought some prevention since the desperate and the dejected could find belongingness within these bodies and would allow them to refrain from acts which otherwise would have been unlawful in our society. Thus for Ross religion gives assurance as it is stated in the bible “seek first the kingdom of God and his righteousness and all other things shall be added unto you” (math 6:33). 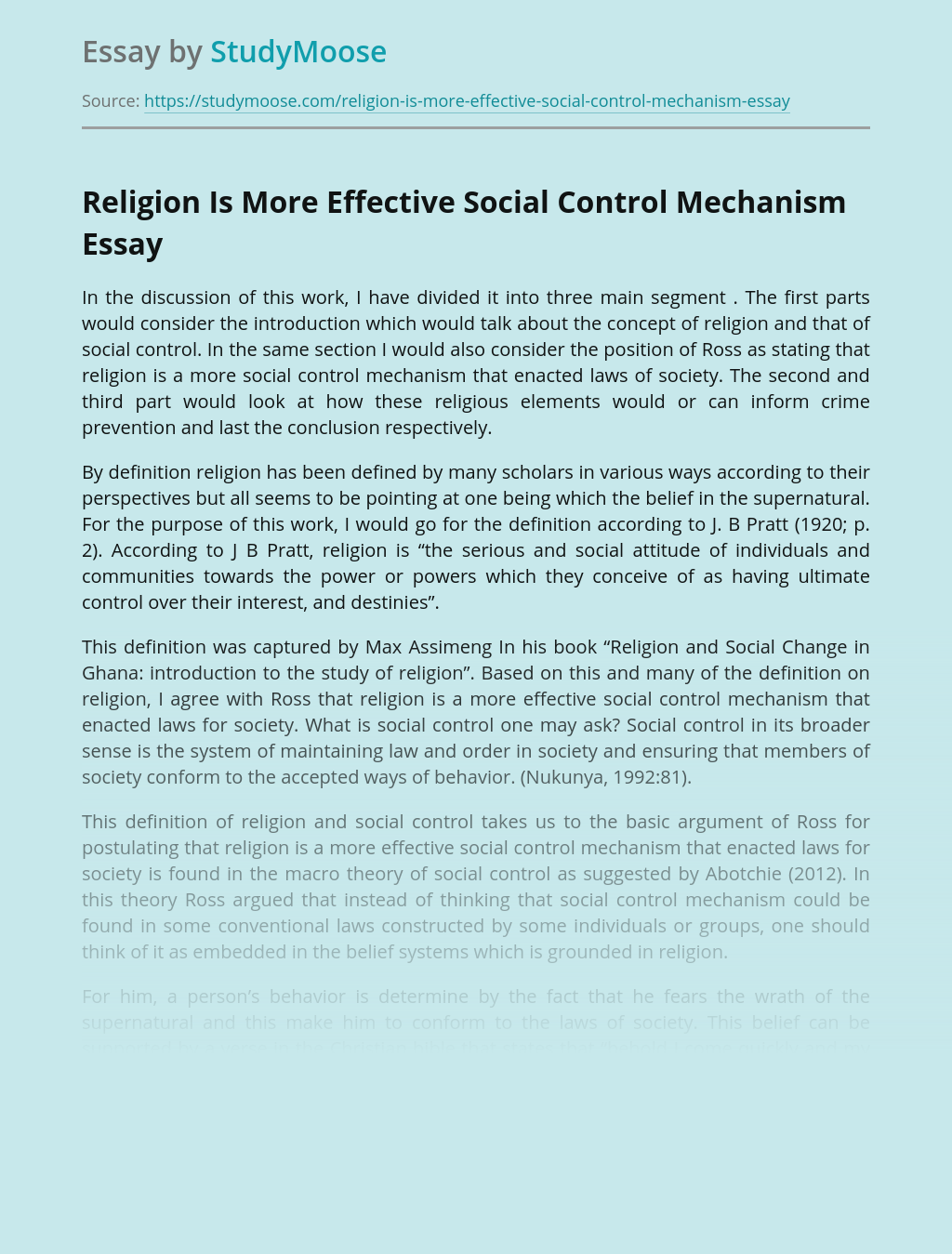 As we all know that Nepal is worldwide known as the only Hindu Nation and it is a matter of Pride to all Nepali’s living in the Country and to those too who have migrated to another Country for Business, Work and other related reasons. I my-self being a ‘Nepali’ had to stay out of...

The Validity of Enlightenment Ideals for Non-Western Countries

Get Essay
The Amish: A Small Society by: John A. Hostetler

In the article “The Amish: A Small Society” by John A. Hostetler, John is talking about the Amish society. The Amish societies are a group of highly Christian religious people who are extremely traditional and refuse to adopt conveniences of modern technology. They are known for their simple living, plain dressings, and their reluctance to...

During a time when no vehicles existed or any type of technology, there was religion. This was part of the pre-modern times. Depending upon what part of the world you are from depends on what type of religion you are likely to encounter. This also determines the likelihood of what religion you may have grown...

1. Compare and contrast key characteristics of two early civilizations (choose from Mesopotamian, Shang, Indus Valley, Chavin, and Phoenician) in terms of three of the following: economy, political system, art and architecture, religion, technology, legacy. Answer: Of the world’s first civilizations, all successful and renowned were located on or near a river. The Mesopotamian and...