The Department of Health initiated the National Dengue Prevention and Control Program since 1993.They are aiming for reducing morbidity and mortality from dengue infection by preventing the transmission of the virus from the mosquito vector human. In line with this their mission is to improve the quality of health of Filipinos by adopting an integrated dengue control approach in the prevention and control of dengue infection.

According to them there are 62,503 cases of the mosquito-borne illness have been reported in the Philippines from January 1 to August 21, up nearly 90 percent from the same period last 2010.

Don't use plagiarized sources. Get your custom essay on
“ Dengue Prevention And Control Program ”
Get custom paper
NEW! smart matching with writer

The death toll was also up from 350 in the same period 2010. The department said the number of dengue cases in the country started to rise in May and peaked last month at the onset of the rainy season. Disease experts are now closely monitoring several barangays across the country for cases of dengue outbreak. In line with this, the group decided to conduct a class and project regarding the prevention and control of dengue fever to raise the awareness of the residents of Barangay Macapagal Village Zone 3.

Dengue fever is an acute febrile disease caused by infection one of the serotypes of dengue virus which is transmitted by genus Aedes. It refers to a benign form of disease with systematic symptoms, fever and often rash associated with pain behind the eyes, the joints, and the bones. Dengue hemorrhagic fever is a severe, sometimes fatal manifestation of dengue virus infection characterized by a bleeding diathesis and hypovolemic shock.

Dengue viruses (DEN) types 1, 2, 3, 4, which are classified as flaviviridae, are principally transmitted from human to human through the bites of the Aedes aegypti mosquitoes. The female mosquito bites the infected human during the day and can transmit the virus to another host immediately or after 8 to 10 days of incubation within the salivary gland of the mosquito. The mosquito host remains infected for life.

By bite of an infected mosquito, principally the Aedes Egypti – is a day biting mosquito (they appear two hours after sunrise and two hours before sunset ). It breeds on stagnant water. It has a limited and low flying movement. It has fine white dots at the base of the wings; with white bands on the legs.

Aedes albopictus may contribute to transmission of dengue virus in rural areas. And other contributory mosquitoes are the Aedes polynensis and Aedes scutellaris simplex.

After an individual is bitten by an infective mosquito, the virus undergoes an incubation period of 3 to 14 days.

Sign and symptoms usually begin about four to seven days after being bitten by a mosquito carrying a dengue virus. Mild dengue fever rarely causes death, and your symptoms will usually subside within a week after starting.

Dengue shock syndrome the most severe form of the disease may cause signs and symptoms of mild dengue fever plus:

Severe signs and symptoms may appear after your fever has improved. In a small number of cases, people with a severe form of the disease die of it. Modern supportive hospital care decreases this risk.

Torniquet Test (Rumpel Leads Test) – First, Inflate the blood pressure cuff on the upper arm to a point midway between the systolic and diastolic pressure for 5 minutes. Second, release cuff and make an imaginary 2.5 cm, square or 1 inch square just below the cuff, at the antecubital fossa. Lastly, count the number of petechiae inside the box. A test is (+) when 20 or more petechiae per 2.5 cm square or 1 inch square are observed.

How is it treated?

For a mild form of the disease:

Methods of Prevention and Control

The prevention of dengue is directed at community and personal mosquito control in endemic areas.

Since there is no known immunization agent against Dengue, nursing efforts should be directed toward the immediate control of its cause by knowing the nature of the disease and its causation. The following are important: Report immediately to the Municipal Health Office if there is any known case outbreak

Any disease or condition associated with hemorrhage is enough to cause alarm. Immediate control of hemorrhage and close observation of the patient for vital signs leading to shock are the nurses primary concern. Nursing measures are directed towards the symptoms as they occur but immediate medical attention must be sought.

Our expected learners are the selected residents of Barangay Macapagal Village Zone 3.

The topic to be discussed is about dengue, which is a disease caused by a family of viruses that are transmitted by mosquitoes.

The method of teaching would be in a form of classroom type discussion wherein the group will act as instructors and the learners as the students. There will be use of visual aids like Manila paper to guide the learners.

It was a bright, sunny day as the group 3 headed their way to Barangay Macapagal Village Zone 3, to conduct their Chat Session. The group was hoping for the Chat Session to go smoothly as planned, and with God’s grace the class went on well. The group was able to achieve their objectives at the end of the class.

After 40 minutes of discussion, the student nurses were able to discuss about the prevention and control of dengue by giving basic knowledge on how to be prevented including the signs and symptoms. Also increasing the awareness of listeners on how it is transmitted lastly, to realize the importance of giving health teachings. The participants acknowledge the purpose of the discussion by participating and they had an ability to answer are questions. In line with this, the participants understand on how can be prevented and controlled dengue. 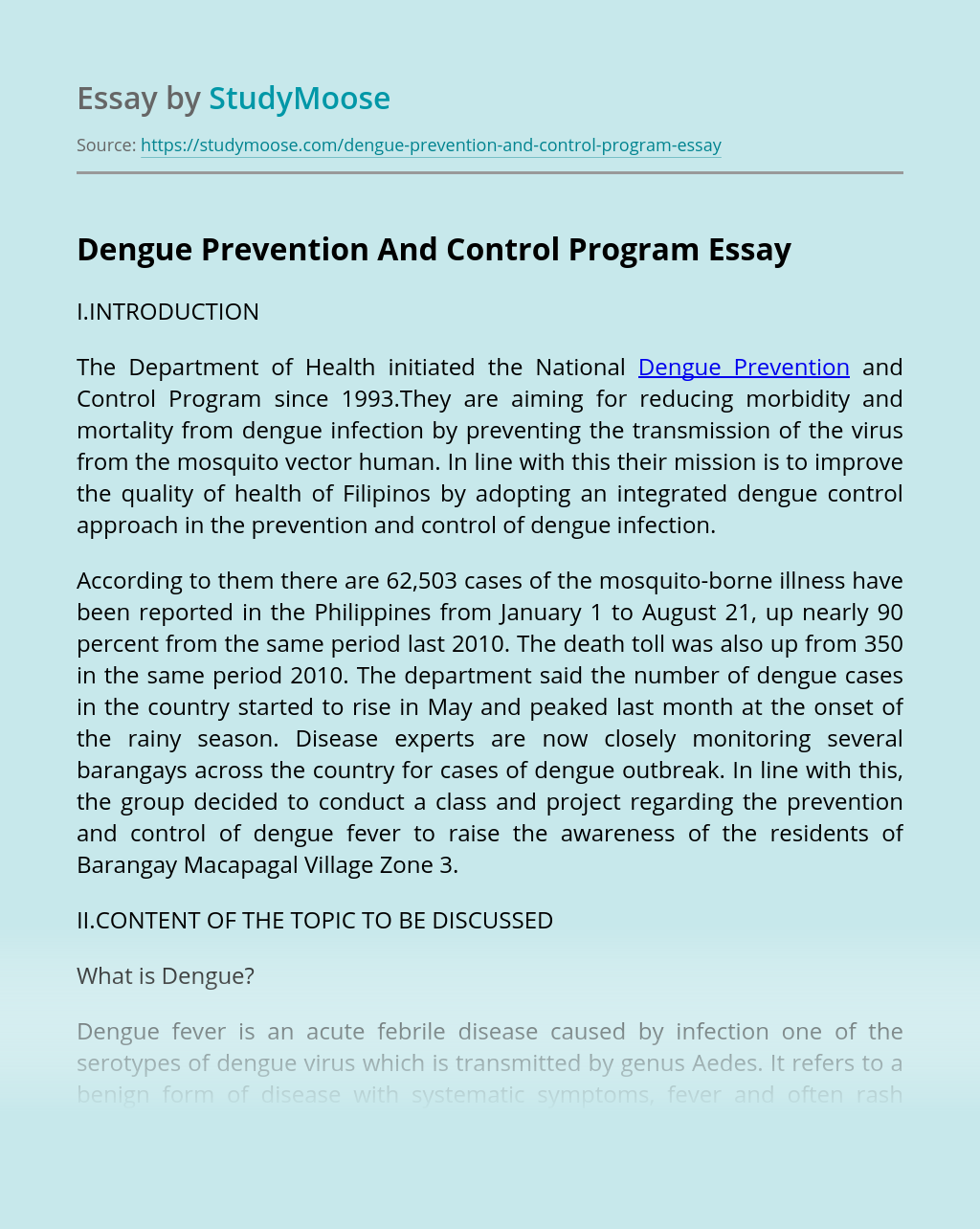