Contrasts between Poems Exposure and Breakfast

Exposure gives the reader a diminutive view of the front line based on Wilfred Owen’s experiences in the winter of 1917. Wilfred Owen repeats four times in his poem ‘Nothing happens’ – nothing except tiny changes in the time of day, the weather and the progress of the war. The men appear trapped in a No Man’s Land between life and death, and the poem’s movement is circular. When it ends, they are exactly where they were in the first verse.

Don't use plagiarized sources. Get your custom essay on
“ Contrasts between Poems Exposure and Breakfast ”
Get custom paper
NEW! smart matching with writer

When one looks into the poem a lot of things become known about the trenches.

Exposure as a word has many meanings. As a medical term exposure is associated with the medical condition of hypothermia. This in a way is referred to in the first line when Wilfred Owen describes the cold.

‘Our brains ache, in the merciless iced east winds that knive us’

Exposure can also mean that something is exposed to something else. There is an example of this in line 6 and 7 when the soldiers are exposed to fear because they hear the ‘wind tugging on the wire’.

This also tells us that the soldiers were very nervous and agitated in the trenches because they were discomforted by the slightest noise which made them think that the enemy was going to attack.

Breakfast is a poem on the subject of an ordinary event at home or in the trenches; eating breakfast. While the soldiers are socialising a bet takes place over which football team will beat the other in a game.

Something rather unordinary then happens Ginger was appalled by the sight of this bet and ‘took the bet up’ raising his head. Consequently a sniper picked him out and shot him in the back of the head.

I feel W.W Gibson wrote this poem to express that even in an ordinary event like eating breakfast something drastic could happen. On the other hand ‘Exposure’ informs the reader about the extreme condition soldiers had to endure in the trenches. The poems are similar in the way that the soldiers in the poems are in the same position at the start of the poem as the end. Both poems have the same picture of being exposed to the threat and reality of danger and death. In exposure the soldiers were exposed mainly to the deathly cold and in ‘Breakfast’ the soldiers were exposed to snipers and gun fire.

Although there are no similes or metaphors in ‘Breakfast’ W.W Gibson uses many other poetic devices, for example enjambment.

‘I bet a rasher to a loaf of bread

That Hull United would beat Halifax

When Jimmy Stainthorp played full-back instead

Wilfred Owen uses a lot of similes and metaphors to put across many images of the conditions of the trenches. For example the first two lines describe the atmosphere.

‘Our brains ache, in the merciless iced east winds that knive us

Wearied we keep awake because the night is silent…’

This tells us that the wind that was coming from the east were ruthless in the way that they were so cold it felt like the wind was stabbing the soldiers. Additionally the soldiers also can’t get to sleep at nights, not only from the cold but also from the silence. This a dramatic piece of irony in the poem because usually people can only go to sleep when it’s silent but this is the very thing that is keeping them awake.

In both poems senses are used to evoke reactions in the reader. In ‘Exposure’ the constant stress reminding the reader of how cold it is in the trenches could evoke a reaction of realisation to how terrible the conditions actually were like in the trenches.

‘Breakfast’ is a poem emphasizing that in the trenches even in the most ordinary events something unexpected could happen. The poem takes place in the trenches where group of soldiers are eating breakfast. Whilst this is happening a bet takes place over a football game between Hull united and Halifax. The bet was over a rasher and a loaf of bread. This tells us that the soldiers did not have much money therefore they bet over food. Ginger (a character in the poem) was appalled by the sight of this so he ‘took the bet’ raising his head above the trench wall, consequently a sniper shot him in the head. This seems much unexpected to the reader but the end of the poem is a repetition of the first to lines. This tells us that the soldiers had to except the unexpected and carry on with their duties; otherwise if they were to mourn for every one who died they would never survive.

Many images are created in this poem for example ‘That Hull united would beat Halifax.’ An everyday conversation on which football team would win a match when played between them. This creates a picture of the soldiers socialising and having some fun. I feel that ‘played full-back’ also gives an image of the soldiers being in defence of their enemy because it has a relation with the defence of a football match.

The structures of the poems are very different. The first obvious observation is that Exposure is much longer than breakfast. Exposure has 8 stanzas where Breakfast only has one. Each stanza in Exposure has five lines; this enables the Wilfred Owen to maintain a constant rhyming pattern. I feel that Wilfred Owen has made this poem long because he had to cover the different meanings of the word ‘Exposure’, where as ‘Breakfast’ is a short poem because I think that w.w Gibson only wanted to emphasize the fact that something unexpected could always happen during ordinary events in the trenches.

Breakfast has quite a simple rhyming the end of each line either ends in the sound of ‘acks’ (Backs and Halifax) or ‘ead’ (overhead, bread. Instead, head and dead). As a result of this the rhyming pattern goes ‘ABBABBBAB’. There is no real pattern to the order of the rhyming words. The rhyming pattern for exposure is quite different because the last line for each stanza does not rhyme with the rest of the stanza. Therefore excluding the last line the rhyming pattern is ‘ABBA’. Although on line 26 Wilfred Owen uses a made up word ‘glozed’ to continue the rhyming pattern but also I feel it is to give the right atmosphere needed which other words might not be able to produce. I feel both poets have used these rhythmic patterns to give a greater effect on the reader.

Alliteration is quite often used in Exposure for example, line 18 and 19 ‘flowing flakes that flock’, ‘We watch them wandering’. I feel this emphasizes the point Wilfred Owen is making and it also makes the poem flow better when read. In Breakfast there is only one example of alliteration ‘dropped back dead’. I feel this is a really powerful place to have alliteration because in really emphasizes the fact that someone has just died in the climax of the situation.

There is an example of onomatopoeia in Breakfast, ‘Because the shells were screeching overhead’. I think that ‘screeching’ is a very good word to use in this occasion because it really dwells on the shells. Exposure also has an example of onomatopoeia ‘Sudden successive fights of bullets streak the silence’. This is quite an unexpected word to use because one would probably expect a word like ‘break’ or ‘disrupted’. ‘Streak’ gives the image of the bullets flying through the sky like jets which leave a trail of smoke behind them as they cut through the sky. There is an example of personification in the very first line of Exposure

‘Our brains ache, in the merciless iced east winds that knive us’

This personifies the wind because it feelings or a personality therefore it can’t be merciless. Also the wind can’t knive (stab) someone because there is no possible way it can posses a knife.

In conclusion I feel the main message Wilfred Owen is putting across in Exposure is about the conditions of the war in the trenches and to all the different situations the soldiers were exposed to. Breakfast puts the message across that in the trenches, even in the most ordinary situation the most unordinary thing could happen. In both poems the poetic devices and language are very dramatic. The whole of Exposure is very tense through out with many poetic devices to emphasize key parts of the poem. Although breakfast is a short poem it is very dramatic but put across in quite a subtle manor. In both the poems the poetic device are very effective. They create tension and suspense. For example in Exposure the repartition of ‘But nothing happens’ creates suspense because the reader then think ‘when is something going to happen?’

Contrasts between Poems Exposure and Breakfast. (2020, Jun 01). Retrieved from http://studymoose.com/contrasts-between-poems-exposure-and-breakfast-essay 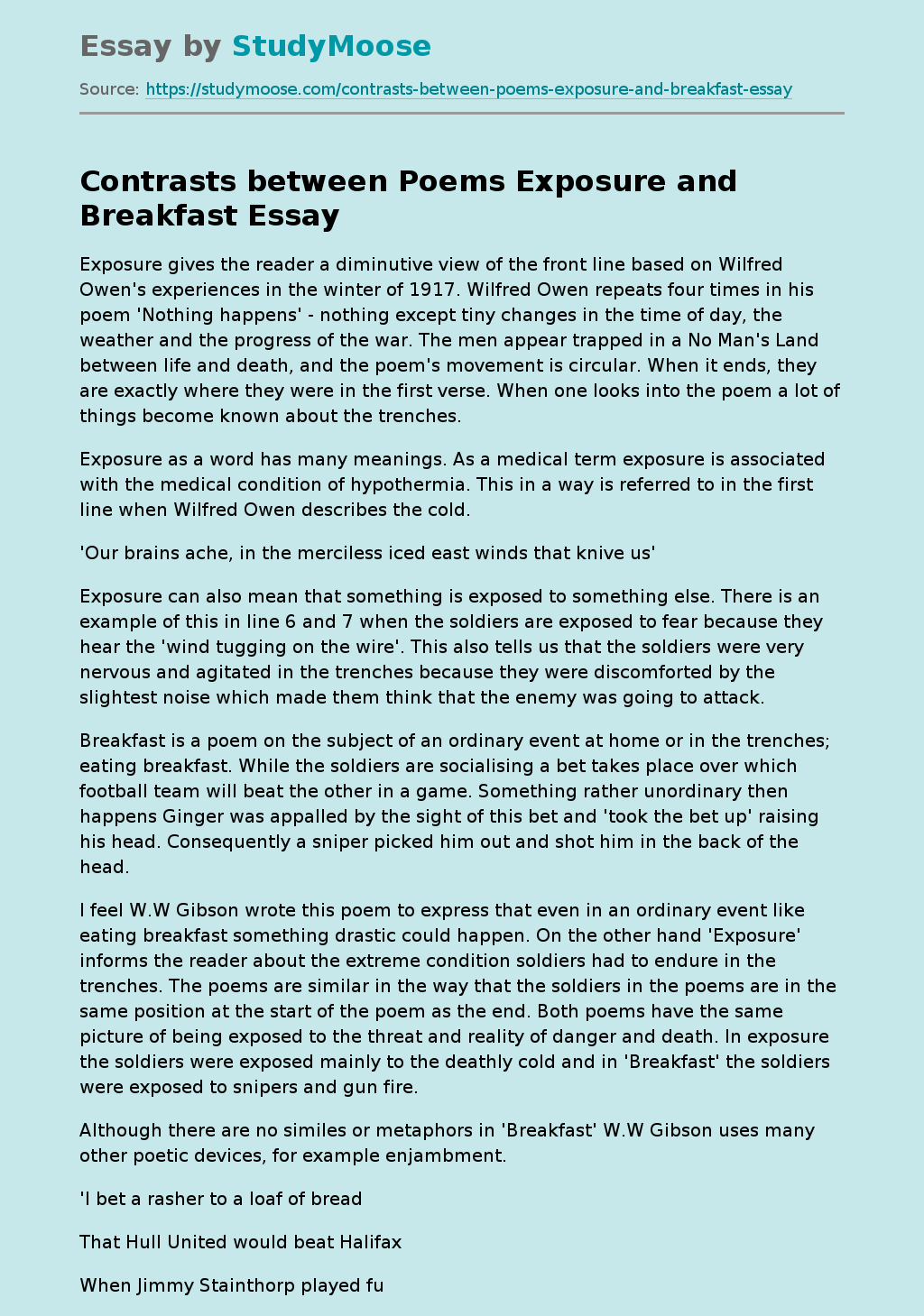