A mother, a wife, a friend: Abigail wanted to share a family with John Proctor. In some aspects she was jealous of Elizabeth, as she had the one thing in the world that Abigail desperately yearned for. “Oh, I marvel how such a strong man may let such a sickly wife be” We can see here that Abigail is being sarcastic to manipulate Proctor in falling for her. “Oh” shows she is taking a calm and subtle approach to get what she wants.

Don't use plagiarized sources. Get your custom essay on
“ Compare the Roles That Elizabeth Proctor and Abigail Williams Play in The Crucible ”
Get custom paper
NEW! smart matching with writer

Though Abigail is pretending to be angry at Elizabeth for being the cause of Proctors rejection towards her, we can clearly see that the empowering emotion over here is envy, towards Elizabeth and Proctors marriage.

Abigail resorts to name calling to cast doubt in Proctors mind and she attempts to compliment Proctor to try and get a taste of everyday life as Elizabeth. The Status’s and reputation’s of the people in Salem were shockingly important to them.

Labels and stereotypes were incredibly common and the people tried their utmost best to protect their prominence. To the locals Abigail Williams was an innocent orphan and the niece of the reverend, other than this they did not think much of her.

So when she went out of her way to accuse the respected people and it became public gossip about the truth of her affair, Abigail’s cherished esteem in the community was suddenly questioned. “(In a temper): My name is good in the village! I will not have it said my name is soiled! Goody Proctor is a gossiping liar! ” Arthur Miller has used short sentences to show the reader that Abigail is extremely angry; this is a quote from act 1, therefore it gives the reader an impression of Abigail’s character.

Miller wanted to show the true colours of Abigail’s persona and he was successful in this.

The exclamation marks shows the emphasise of her words, Abigail is fuming at this point and concentrates all that irritation at Elizabeth. From a orphanage, it was obviously hard for her to compose a “good name” for herself; however Abigail’s determination had driven her to demand a better life for herself. She did not want all her accomplishments to be shattered by “Elizabeth’s lies”, so tried to criticise her by calling her a “liar”. This challenges her character as the readers are perfectly aware of Abigail’s dishonest nature, we all know that she is the one who is deceitful and craves vengeance, and Elizabeth is the direct opposite.

From the beginning of the play Abigail’s intentions were clear, she obviously wanted to develop her relationship with John Proctor and gain his respect. Abigail was a young, naive and narrow-minded maid who did anything to save herself, no matter who she disappointed along the way. Elizabeth was a totally different person. Elizabeth’s motivation came from the passion of raising her family; she wanted to restore the trust in her marriage to Proctor, for the benefit of her children. She was much older, wiser and she devoted her life to her religion. I wake and walk about the house as though I’d find you comin’ through some door” Miller gives a childish effect to this quote and makes Abigail sound like a love struck puppy, this reminds the reader that she is only a teenager. This quote illustrates that her love towards Proctor is enduring and it also demonstrates her repulsion towards Elizabeth. The witch trials were an obvious case of McCarthyism, the court of Salem did not require much evidence for prosecution. It was simply unjust! The people at the bottom of the social hierarchy system had an even inferior chance for survival.

Although the people were given a chance to avoid death by “confessing to their sins”, this was an excessive act and showed that the people were deprived of rights. Elizabeth is understood to be extremely pious; she controls her emotions and buries her feelings of anger towards Abigail to avoid any uncontrollable outbursts of extreme emotions and frustration. However Abigail takes pride in her hysteria. This highlights the fact that the age difference between these 2 women is phenomenal. “He have his goodness now. God forbid I take it from him! Elizabeth is much more composed than Abigail, even though she is losing her husband she is happy for him, as she believes he is now at peace. Throughout the play John struggles with his feelings that he was not a good man. Hale tried his best to save John from being hanged to death but Elizabeth believes that he is finally going to be cleansed of his sins, as he has finally come out the dark about his affair. She loves him so much that she is willing to let him go. She feels that he is doing the right thing. She takes the name of God to justify herself.

A Selfish, stubborn and shameless stray: Abigail was not the forgiving type. Once someone had double crossed her, she did not take it lightly; Abigail created fear in the hearts of her peers. She even turns against her friends to make her story more convincing. Due to the fact that her parents were shot in front of her, she has never learnt to accept this and this has limited her well- being, so she blames every one else. On the other hand Elizabeth was selfless and even though her “loyal” husband betrayed her integrity, she learnt to overcome this and forgave him. (in agony): My husband-is a goodly man, sir. ” Unlike Abigail, Elizabeth has never told a lie in her life, however the one time it would save her life, she tried to save her husbands reputation. This may be an act to show forgiveness to Proctor as she may have thought it was her last opportunity to see him. She dedicated her life to being a good Puritan so wanted Proctor to live a peaceful and guilt- free life without her. However she may have felt that it was her duty to conceal the truth for her husband’s case, as she has been the one who has been more interested in preserving appearances.

If they put aside their detestation towards each other, then they would actually have more in common than they let on. Firstly, they are in love with the same man, they are both religious and they both aspire to fulfil their motives (whatever they may be). Although they have extremely different intensions that drive them, they are both very ambitious and stubborn. They both try to exert influence on society as they want to be remembered after their deaths. Also, in the end they both lie, although for alternating reasons.

Compare the Roles That Elizabeth Proctor and Abigail Williams Play in The Crucible. (2016, Oct 30). Retrieved from https://studymoose.com/compare-the-roles-that-elizabeth-proctor-and-abigail-williams-play-in-the-crucible-essay 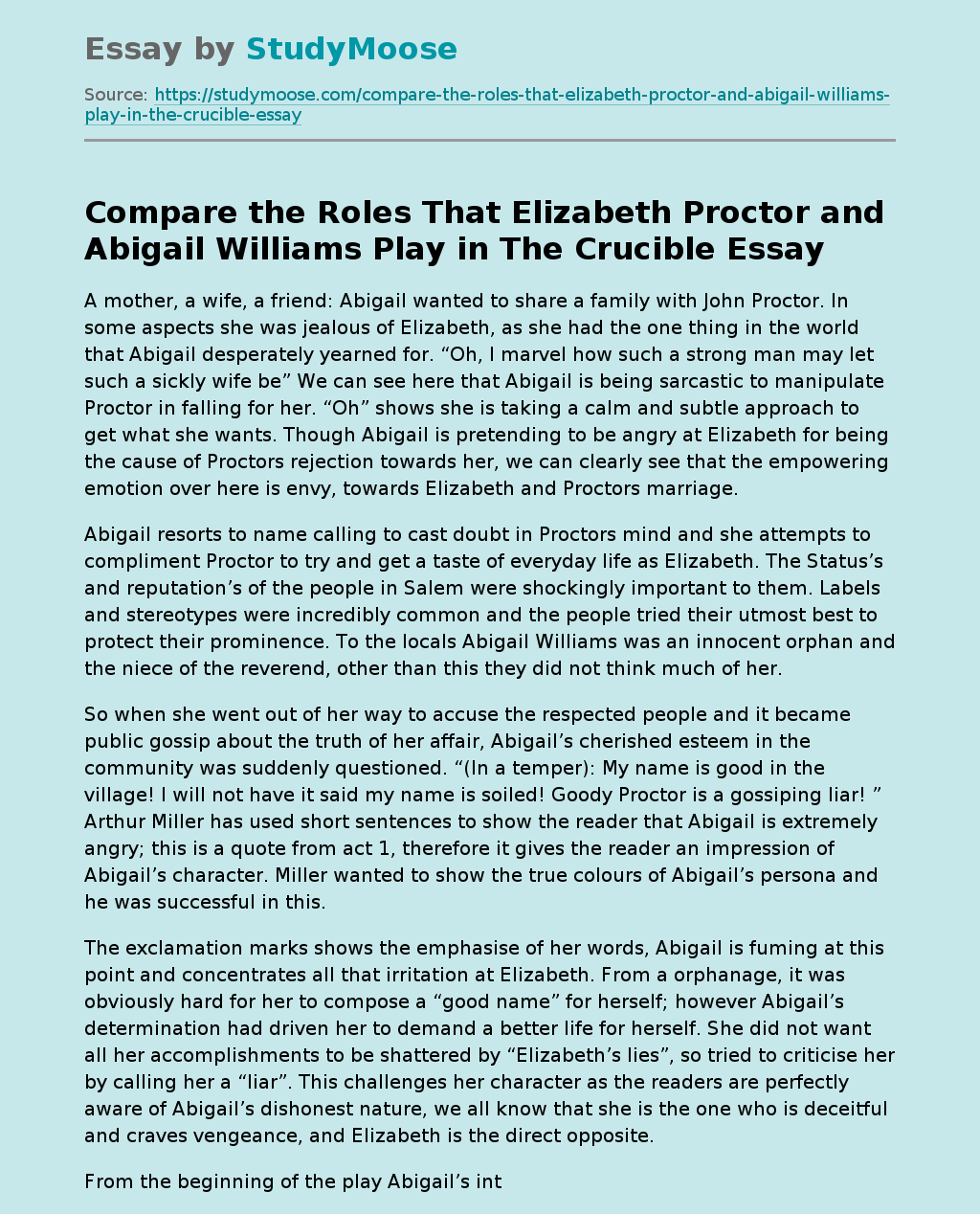