Due to our nature, the human race will do astonishing things in the name of love and fear. Abigail Williams in “The Crucible” is a fantastic example of this. Not only are her actions absurd to try and gain John Proctor’s whole hearted affection, who was her lover, but also to gain submission of an ample portion of Salem due to fear. A large part of the submissiveness was gained by her ability to manipulate others, especially those she knows well.

Don't use plagiarized sources. Get your custom essay on
“ Crucible – Abigail Williams ”
Get custom paper
NEW! smart matching with writer

She starts the fire of hatred, for witches and the townspeople, within Salem. The fuel was already there; all that was needed was the last spark to get the flame going. Abigail was this spark, created by her insatiable lust for John Proctor. She instigated the witch trials, and used the produced hysteria in an attempt at personal gain, using a step by step plan. This plan developed through the play, feeding Abigail’s ambition and power.

Step 1. Manipulate the town’s girls into doing witchcraft in the woods.
Get quality help now

Abigail convinced some of the teenage girls in Salem to join her in the woods. Being unmarried teenage women in this time period, they had little to do, minimal social status, and undoubtedly yearned for adventure. There were only two people lower than them in status, and that would be Abigail and Tituba because Abigail was an orphan, and Tituba a black slave. She convinced Tituba, to sing songs from Barbados about witchcraft. Abby then persuaded Ruth Putnam to believe that Tituba would be able to conjure up the spirits of her dead siblings.

If it worked then she could bring to light the mystery behind all of her dead siblings. In getting others to do it with her, she will not be the only one to be punished, therefore spreading the blame across many, and if caught the blame could be transferred to the one with the least status, the slave- relieving Abby of punishment.

While in the woods Abigail drank a charm in an attempt to kill Mrs. Proctor, which in her eyes is the only person between her and John. “You drank blood, Abby! You didn’t tell him that!” (Betty, A.1, p.1244). This quote begins to give the reader an idea of what Abigail will do to gain Proctor. It would take quite a drive for someone to willingly drink blood, and in drinking it, wish death upon another person. This was a very Puritan society, and all of her actions would be looked down upon by the townspeople. First she entered the forest (the place of the Devil), then she danced (unacceptable for women of that age), then she drank a charm of blood (not accepted by society), and lastly in drinking that charm she is wishing ill upon her ‘neighbor’ which is going against one of the Commandments. The Bible was the law at the time, and going against its foundation was disgraceful.

When Abigail is being questioned by Parris, the day after being caught, about the girls’ doings in the woods, she gives away little. She reveals “We did dance, uncle, and when you leaped out of the bush so suddenly, Betty was frightened and then she fainted. And there’s the whole of it.”(Abigail, A.1, p.1238). This sentence shows an insight to Abby’s manipulative power over Parris. Fainting from fright from being caught by her father doing an illegal activity could be an explanation for Betty’s inactivity. Abigail admits to what he saw, but makes it hard for him to push the question further when she says the finalized statement ‘there’s the whole of it’. The affirmation also denies any other doings, saying the girls are innocent. Parris then grasps at another chance to question Abby, this time about possible rumors of her in the town. She skillfully maneuvers around the interrogation, and then is saved by the entrance of Mrs. Putnam.

Goody Putnam reveals her and her daughter (Ruth)’s desires to figure out what caused her children to die in infancy.

When questioned Abigail turns the accusation to Tituba saying she was alone in conjuring the spirits of Ruth’s siblings. This brings the pressure off of Abigail and onto two other people. She can then sink into the background, becoming invisible while Parris and Hale interrogate Tituba. Tituba is the unhappy slave, with witchery songs, low status, and desiring to be free and return home. Due to this, Parris and Hale break Tituba down till she admits to contracting with the devil. In a frenzy to bring pressure off herself and avoid hanging, Tituba then goes on to state names of women in the community. Sarah Good and Goody Osburn are first.

Then Abigail stands up from the shadows seizing the chance of being able to accuse people and bring the attention to her in a positive way by saying “I want the light of God, I want the sweet love of Jesus! I dance for the Devil; I saw him; I wrote in his book; I go back to Jesus; I kiss His hand. I saw Sarah Good with the Devil! I saw Goody Osburn with the Devil! I saw Bridget Bishop with the Devil!” (Abigail, A.1, p.1263). These exclamations go against what she has previously sworn, yet no one seems to notice anything besides her confession and the names she says. Abby repeated the names Tituba already said, along with another, therefore strengthening the accusations while playing on the slave’s incompetence of missing one of the people, which strengthens her own position.

Step 5. Use newfound status to demolish those who oppose her.

Since there are so many people being accused, the town gets an aura of being unsafe and corrupt by the Devil. This causes the accused to accuse others, from old rivalries and suddenly having a chance to comeback, or from being interrogated till they give up names, multiplying the numbers, while they also believe the accusations out of fear. Fear of being accused, of being witched, or of getting hung for disbelieving the court and the Bible. In Act II sixteen people had warrants sent out for their capture.

Abigail continuously accuses people who confess, adding to her credibility. She also has fainting incidents, trances, and other public displays which she credits to others using demonic powers on her, sending the message that she is an innocent orphan being harmed by the Devil because she is standing against him. This helps her gain pity, and brings more citizens to her side. An example is when Mary Warren tries to testify against Abigail, Mercy, and Susanna. The girls exclaim that Mary has sent her spirit out in a wind to make them cold. This is proven by their exclamations. Mercy: “Mary, do you send this shadow on me?”

Danforth’s question seems to state what the other girls were implying. This goes to show what some acting can bring upon a girl and a town. By faking a wind, the girls make Mary’s testament against them invalid, therefore increasing Abigail’s power within the court, and getting rid of another challenger.

Step 6. Secure Goody Proctor as a witch using credibility established within the court.

After accusing Elizabeth in Act 2 because of alleged use of poppets, Abigail has to make sure there is no way out for her. When this is done and she is hung she can finally have her love, John Proctor. The townspeople generally ignore evidence and support her claims of witchery, most likely out of fear of her power. John Proctor is one of the few willing to stand against her. After many attempts, all of which failed, John resorts to drastic measures. He admits to committing adultery. “I have made a bell of my honor! I have rung the doom of my good name- you will believe me, Mr. Danforth! My wife is innocent, except she knew a whore when she saw one!”(Proctor, A.3, p.1309) In this statement, Proctor not only admits to adultery, and tries to protect his wife; he also calls Abigail a harlot.

Abigail is astounded by his reveal, and undoubtedly worked up by his language towards her. This is the point where Abby seems to realize that Proctor does not love her and that she won’t ever be with him, even if Elizabeth dies. Her plan has failed, and everything she has done was for nothing. Her astonishment turns to resentment, for she then makes no attempt to same John when he is sentenced to hang. Her only thoughts now seem to be of self preservation. She was the ring leader of the witch trials, and with them coming to the end, and no chance of being with John, her power will soon be gone. She steals her uncle’s savings then flees the city. She lost a love she never truly had, and in the process left behind a broken, manipulated town.

Love and fear are two of the most influential emotions, and in “The Crucible” both are experienced firsthand through Abigail. The author, Arthur Miller, uses this to his advantage making the play and characters relatable to the audience. These universal themes are relevant at all times in history which is why the play is still shown to this day. Abigail is not only a great example of those traits, but also reflects a maniacal manipulator existing in many societies. This along with other traits makes her the most important character to the play, along with the witch trials which she helped instigate for personal gain. It’s amazing what a teenage girl in a small town can do with a few words and manipulation. 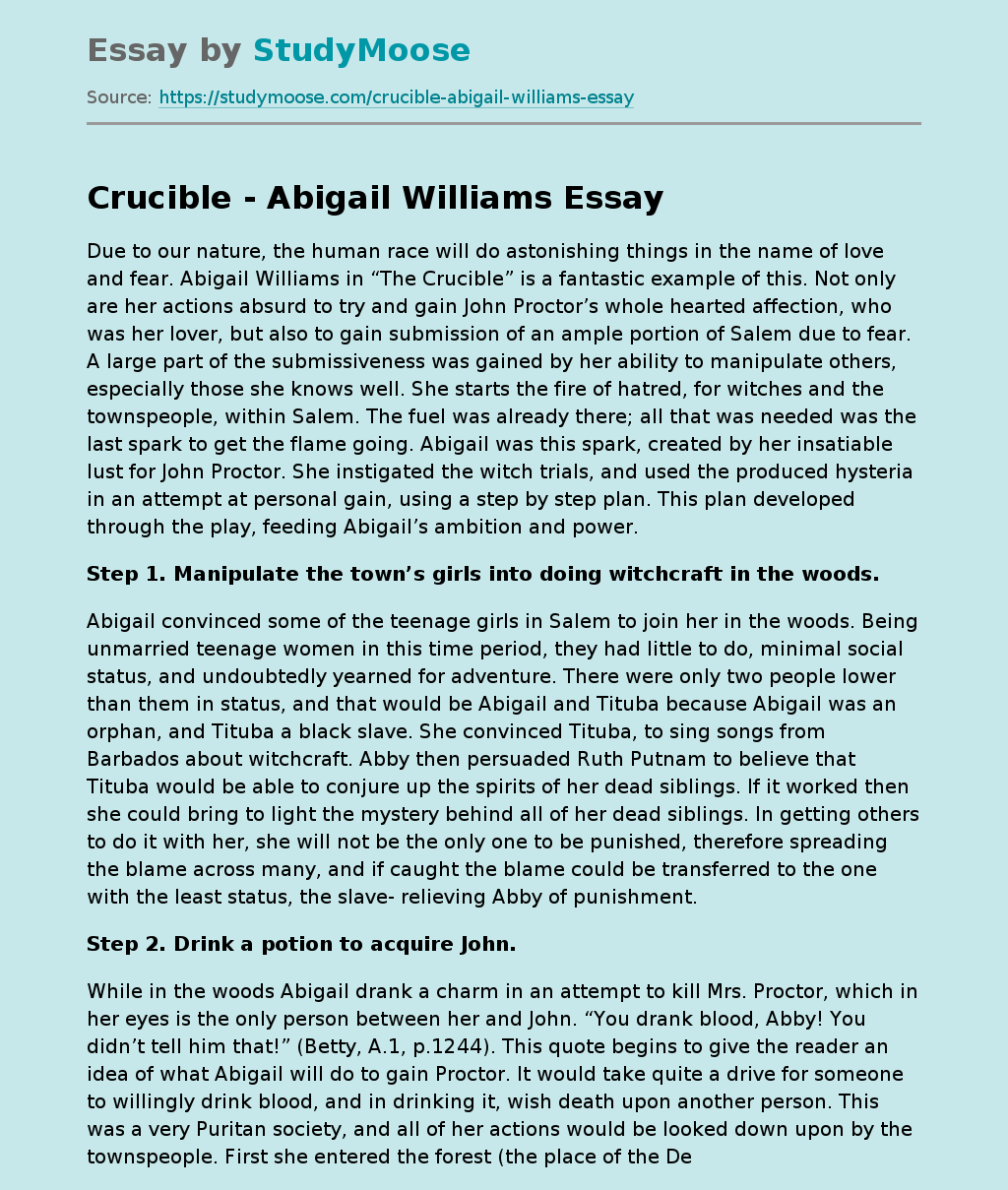