In 1692, in the town of Salem, Massachusetts, several young girls experienced a conjured illness, triggering the beginning of mass hysteria in the town. The unexplained illnesses were thought to be the devil’s doing; using witches to stain the town. The hysteria spread within the strictly religious town and allowed for revenge and old jealousies to be rekindled. Women and men fell victim to the young girls and were condemned to hang. The unimaginable events that took place became known as the Salem Witch Trials.

Don't use plagiarized sources. Get your custom essay on
“ The Crucible: Abigail Williams ”
Get custom paper
NEW! smart matching with writer

The trials brought Arthur Miller to write The Crucible, depicting the unfortunate events. Throughout The Crucible, a young girl named Abigail Williams uses her cunningness and deceitfulness to get what she wants. Her jealousness and lack of moral and ethics gives her the ability to condemn innocent beings to death, without any questions. Abigail Williams is seen as “seventeen and strikingly beautiful” (138). However, she is selfish, and an excellent liar. When questioned about what had happened in the forest, she saves herself by saying she and the girls were only dancing.

Abigail lies with the intention of keeping herself out of trouble. Abigail is later interrogated about the night before. She says it was Tituba’s idea and Tituba immediately confessed. Abigail is jealous and sees how Tituba is praised after she confesses; as Gods light in the world, looking for evil. Abigail accuses several women of working with the Devil so she too can be praised (158). Everyone looked beyond her deceptiveness and thought what Abigail was saying true.

Abigail’s jealousness of Tituba provoked her to accuse innocent women of witchcraft. Abigail is also dark and cruel.

She says to Betty and Mercy that if they speak a word of what happened in the woods, “I will come to you in the black of some terrible nights and I will bring a pointy reckoning that will shudder you” (144). Abigail proves she would do anything to keep herself out of trouble, even if it meant murdering her cousin. Abigail transforms to a terrifying young woman, who has the capability of accusing innocent townspeople. This power fills Salem with fear to speak out against her.

Her elaborate strategies and devotion make her undefeatable. She becomes more ruthless and bold in her accusations. She accuses Elizabeth Proctor of being a witch, who was a good woman and well respected within the Salem community (172). Abigail stabs herself in order to put Elizabeth in the blame, revealing her dedication to the accusations. Her perseverance and conniving schemes give the townspeople no other choice but to believe what she is saying. Abigail is a merciless villain, who acquires the power to accuse several more women in the town of Salem.

What was once fourteen accused escalates into thirty nine, almost overnight. Fear is present in all the townspeople, who are afraid Abigail would seek revenge on them. When Proctor states Mary must tell the courtroom Abigail is lying, Mary warns Proctor she will accuse Proctor of lechery (174). Proctor is surprised Abigail told anyone about the affair. Abigail evolves into a cold-hearted girl who would do anything to get what she wants, including accuse the man she claims she loves of lechery.

Abigail’s transformation into a villain motivates Proctor to go to the courtroom and prove Abigail is not blameless. Abigail continues to be a heartless girl, set on destroying lives of women and men in Salem. Her humanity seems to disappear completely, as she accuses more and more women. She has a huge impact on the girls, who are too terrified to confess they were only pretending to be witched. Abigail targets and manipulates weak Mary Warren, a girl who used to be her friend. “…A wind, a cold wind, has come (her eyes fall on Mary Warren)” (188).

Abigail lost all the emotions she had for Mary Warren and Proctor, accusing them both of witchcraft. She evolves in to a selfish girl, who craves the attention and power she receives from Salem. Her power seems too much for Mary Warren to bear, as she returns to Abigail’s side. She becomes lustful for power and control, denying any accusations made against her. By first accusing the town drunk and homeless woman, her credibility sky rockets. She had the confidence to accuse Elizabeth, a woman who is highly respected. In order to fulfill her fantasy with John Proctor, Abigail losses her conscience and condemns anyone who interferes with her plan.

Her continued ruthlessness and confidence invokes intimidation in all of Salem. She takes complete advantage of Salem’s ignorance to satisfy her desires. The trials end in nineteen innocent people being hanged. The town’s attitude towards the execution changed into sympathy for the people who had fallen victim to the girls. Mass hysteria can turn seemingly innocent girls into cold-hearted killers who inflict pain on others. 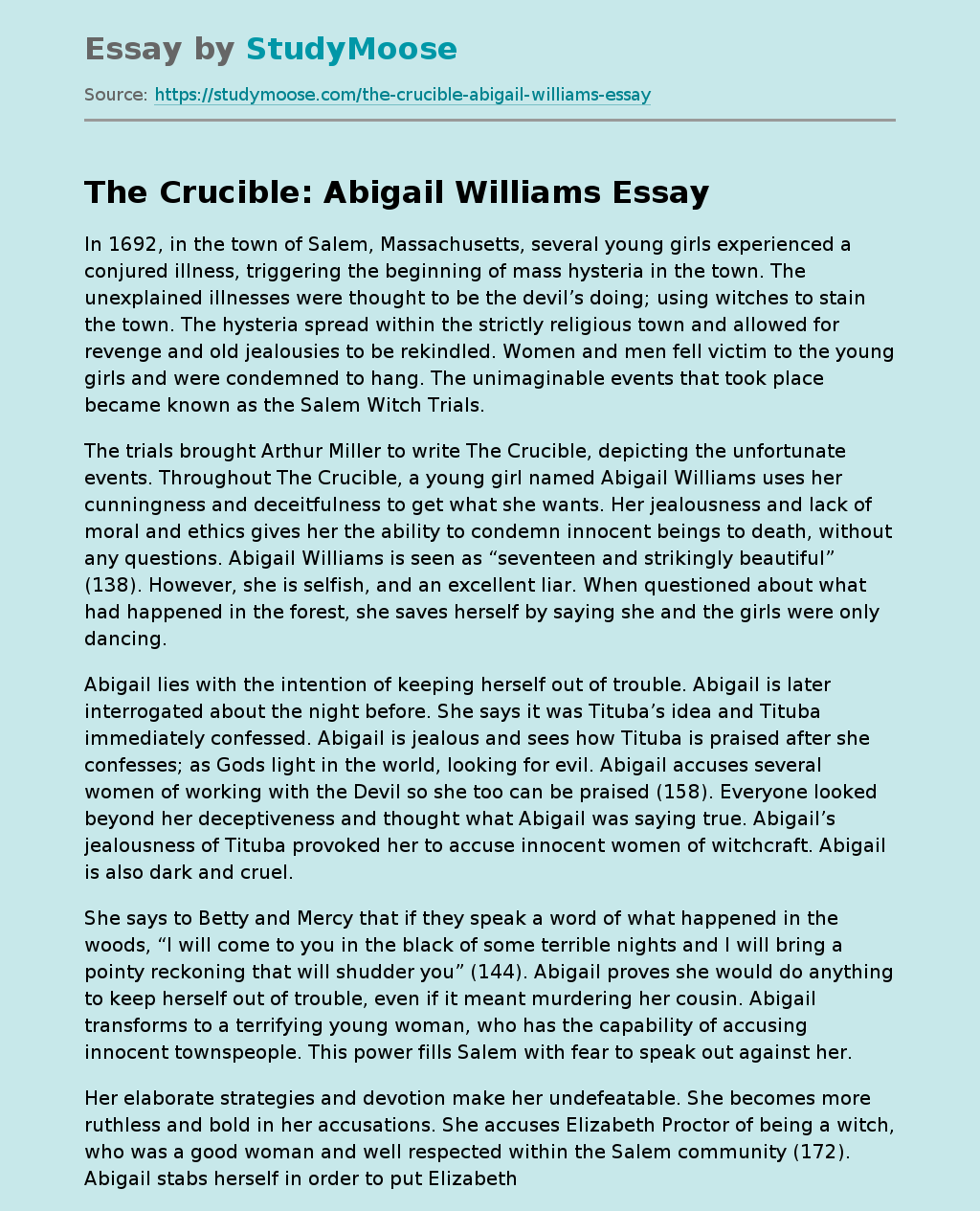