Hysteria Comparison of the Salem Witch Trials and the Holocaust

During both the devastating Holocaust in the Germany and the tragic Salem Witch Trials in the small town of Salem, innocent people were brutally killed, causing hysteria among the people. Both groups of people endured hardships because of the hysteria that occurred among them. This hysteria caused people to react in ways that they would not usually act. Both of these events are very historical and help The United States of America be a unified and prosperous country that it has grown to become today.

Don't use plagiarized sources. Get your custom essay on
“ Hysteria Comparison of the Salem Witch Trials and the Holocaust ”
Get custom paper
NEW! smart matching with writer

Hysteria is defined as an uncontrollable outburst of emotion or fear, often characterized by irrationality, laughter, weeping according to the Webster’s Dictionary. The Holocaust is often defined as the brutal killing of about eleven million innocent people because of a racial prejudice against the Jewish race.

This tragic occurrence was conducted by the awful and merciless dictator known as Adolf Hitler. The Jewish people were not the “perfect” race that Adolf Hitler wanted to create.

He contradicted himself because not even he fell under the requirements that it took to become this perfect race. The Jewish people, such as ones that were only small babies and the elderly, were inhumanly killed in multiple ways. One example of this brutal killing of the innocent was when small children could be ripped away from their parents to be sent to the work camps that were scattered throughout the country of Germany.

These work camps often worked the children so hard that a because of their lack of food and water killed them.

This thing that these innocent people endured inside of these ruthless work camps is sometimes unimaginable to the human mind. The Salem Witch Trials took place in the little town of Salem. These events were sparked by a group of adolescent girls who were caught dancing in a forest and supposedly conjuring spirits. Witchcraft was very much frowned upon during those times. Religion was very important and in this circumstance many of the people of Salem were put to death.

The girls had convinced themselves that if they lied and accused other people of being witches, they could take the blame off of themselves. John Proctor, who was a farmer in Salem that was accused of witchcraft, was willing to taint his own soul by admitting that he had an affair with Abigail. Abigail, who can be seen as the antagonist of this story was one of the girls that was accusing others of witchcraft. After John Proctor had be practically condemned by his once loyal servant Mary Warren and the other girls he knew that there was no more hope for him ever becoming an innocent man. “A fire, a fire is burning! I hear the boot of Lucifer, I see his filthy face! And it is my face and yours, Danforth!”(Miller 111).When John Proctor said this, he being a somewhat religious man himself, knew that only the Devil could be behind all of these horrible things that were happening in his hometown.

He felt that if he was going to go to hell so were the rest of the people that accused him of witchcraft. The people that accused him had done no better. John Proctor was led to react like this solely because of his fear of being put to death and leaving his wife, Elizabeth, alone. The lies turned into a large scandal among the people. The religious conflict in Salem deeply affected the outcome of the trials. This led to many innocent people being put to death because they were accused of being witches. In both the Holocaust and the Salem Witch Trials innocent people were put to death. Elderly people were not respected throughout the trials and their opinions about what should happen were never really listened to.

The elderly people in the holocaust had no say so in anything and often they were looked at as a complete waste of space. According the Nazis, the vicious soldiers who ran these brutal camps, the elderly people could easily be killed so that they could make room inside of the often over crowded work camps. Poor people were also were frowned upon during the Salem Witch Trials. Many of the people, who had money and were well off, thought of them as scum. In a lot of cases there are people that tend to think that because someone does not have money they cannot make logical choice or decision. In the Holocaust many people that were poor were imprisoned. These people were not considered important.

They were often considered to be the lowest of the low. During both of these events it is sad that just because someone is old or someone that lacks money could be treated as any less of a person that was younger or had money. There were deep rooted issues in both Germany and Salem that led to these dysfunctional occurrences that caused a mass hysteria among the people. Unity was the key factor that lacked among the people in the town Salem and the country Germany. Although Germany was united patriotically they were not united religiously. In Salem the people lacked a religious unity.

They were not confident in their faith in God. If they were strong in their faith they would have had some sort of conscience and feel bad that they knowingly put innocent people to death. Lying was the main thing that led to the downfall of Salem. These lies left the town devastated both emotionally and economically. Germany also suffered from being economically and emotionally hurt. The very minimal amount of people that were still alive after the dreadful Holocaust had to recover from the devastating loss of all of these people. The emotional toll must have been huge amongst the people that lost loved ones.

Also, with the amount of people that were gone it greatly affected the amount of money flow. Without all of these people to work in many of the businesses and make money for the country also caused Germany to struggle deeply. The Holocaust caused far more issues for Germany than there ever was before World War II. In conclusion, a mass hysteria can occur at any place or at any time.

Being religiously unified as a country or as a small town should be one of the main goals because without it there will as we have seen in both of these events be a mass destruction of people and economy. God helps those who are desperate in times of need, and also those who surround their life with God. So if a country or town were to surround its laws around Also, man should be able to stand for what he believes in no matter what the situation or occurrences. Staying strong in your faith will eventually benefit one in the end.

Hysteria Comparison of the Salem Witch Trials and the Holocaust. (2017, Apr 02). Retrieved from http://studymoose.com/hysteria-comparison-of-the-salem-witch-trials-and-the-holocaust-essay 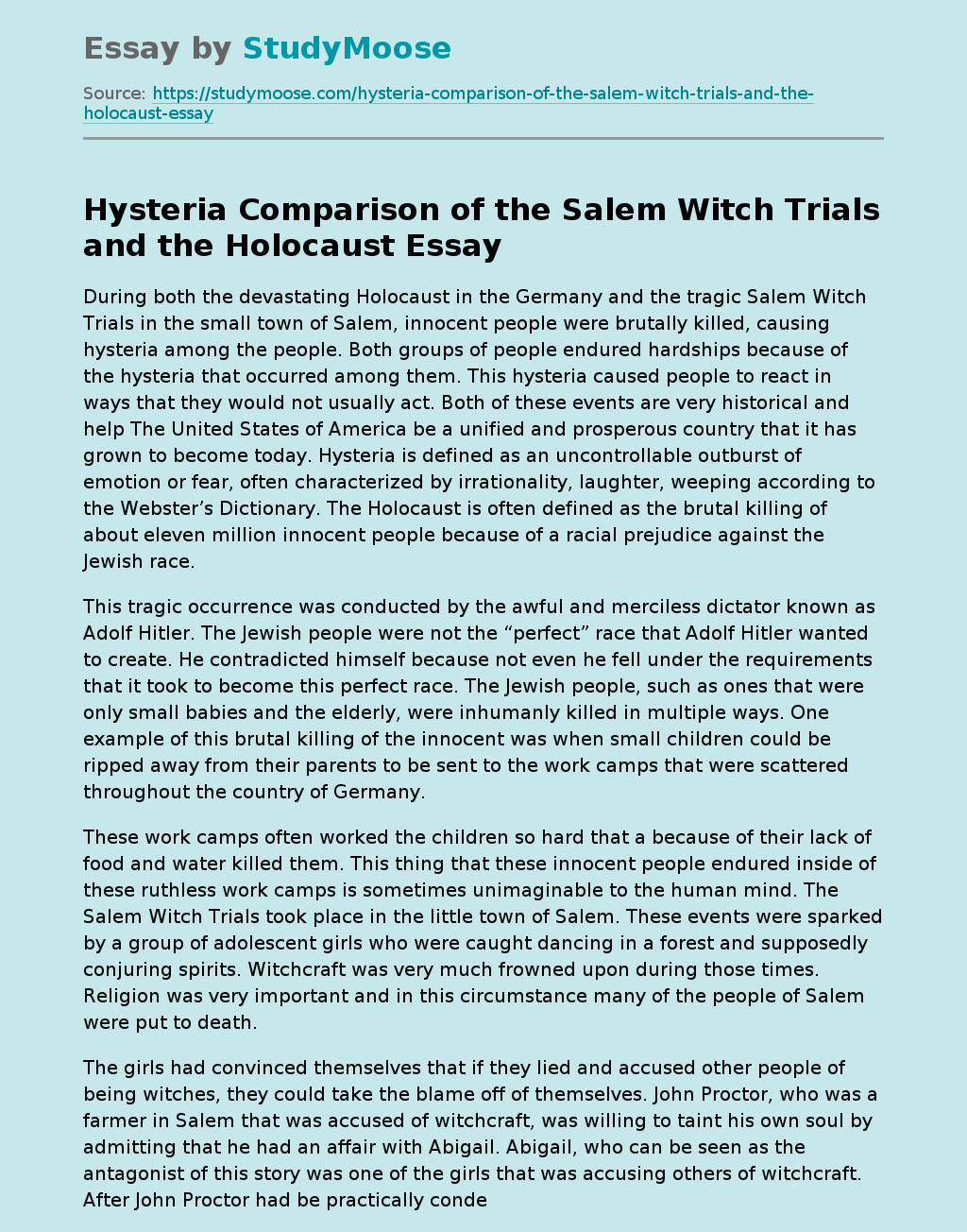