The Crucible is a film set in the time of the Salem Witch Trials and written by Arthur Miller. The film and play, though inaccurate in some specific details, has some incredible accuracy for a story that was meant to symbolize McCarthyism. It accurately displays the tension that resulted from land arguments as well as their possible effects on the SalemWitch Trials. There are some inconsistencies relating to individual character, but the major historical inaccuracy comes in the form of the cause of the Salem Witch Trials along with the motives and identity of certain characters.

Despite these failings, the movie and play are accurate enough that it does not give viewers notions about the Witch Trials that did not at least partially exist in history.

There are multiple theories about the cause and many of them have some sort of evidence or logical support, but the one Miller chose is that it was the fault of a few girls and a slave who were trying to get out of trouble.

While not impossible, most modern scholars have other idea about how such an event occurred. The primary theories of the cause of the Salem Witch Trials are Ergot Poisoning and the Fatal Spark2.

Ergot poisoning has a substantial evidential basis, but with some gaping holes. The theories of Emergent Capitalism and the Fatal Spark have a lack of evidential basis, but have solid logic behind them and in fact do not preclude the possibility of Ergot Poisoning being involved in some form or way.

Ergot Poisoning, or Ergotism, is when someone is exposed to a large amount of the Claviceps purpurea fungus that can grow on Rye. A cold winter and wet spring with high humidity enhances the growth of Claviceps purpurea, like the seasons preceding the Salem Witch Trials, and a low-lying marshland farm area, like the area surrounding Salem, has a even higher chance of ergot infestatation1. The year of the Salem Witch Trials also had a shortage in Rye from the year before which caused them to eat freshly harvested Rye, increasing the chances of infestation surviving the baking process.

One of the other effects of Ergotism is on animals, specifically grazing animals. Considering that one of the supporting ideas for the witchcraft was an increase in the death of cows, it is possible to see those deaths as a indicator of high amounts of Claviceps purpurea1. Infants being fed poisoned milk also have an extremely high case of death, which can be taken to mean the increased number of infant deaths can be caused by Ergotism as well. The most important indicators of Ergotism are the people who were affected the most and the symptoms those affected described.

The vast majority of girls who claimed to have been affect lived on the western side of Salem near the farm area, and three of the first to be involved lived on a single Rye farm. They also all claimed to be seeing apparitions, feeling pinches and pinpricks, burning sensation, and several supposed had seizures. All these things are symptoms of Ergotism.

Tituba’s origin gave legitimacy to the claims of witchcraft to many in the community and combined with the other factors made her the focal point for the Salem Witch Trials to begin. There were also severe issues in the religious community at Salem wrought by the unpopular reverend Parris. According to Miller, Parris is a character who is lead by self-denial into leading the cause against witchcraft, but in reality Parris was an unpopular reverend who preached about the possible attempt of Satan to “bring down” his church shortly before the trials started.

Reverend Parris’s actions created the religious tone that could possible had led to the overreaction of the villagers to the charges of witchcraft and the actions of Tituba. The Puritan Church also had a monopoly on interpretation of the spectral Evidence3 which meant that personal interpretations of doctrine held as much influence over the court proceedings as the actual written law did. The Royal Governor at the time was very cautious about intervening in local affairs and refused to do so.

The last governor had been overthrown and the new one did not want a repeat. This left the local courts, judges, and reverends to pursue the accusations of witchcraft as they chose to. This leads a little falsity to The Crucible which tends to portray the court itself as legitimate, even if corrupted, abused, and illegitimate in its actions. When this is combined with the bad crops, sickness, and infant mortality of the years leading up to the Salem Witch Trials it is easy to see how even a small event could have created such disastrous consequences.

One thing The Crucible and history agrees on is how the economic tension of the time affected the Salem Witch Trials. Many of the accused came from the upper class east side of the town2 as a result of the lower class members using the east side residents as scapegoats. There is also a second theory that Reverend Parris was intentionally using the girls for his own business interests. Because of Parris’s unpopularity before the Witch Trials he saw his renewed followers as a means to gain money from tithes as well as take out certain businessmen in order to lower the price of their land and businesses3. The Crucible tends to portrays Parris’s actions as him saving his own job in Salem rather than any active measures on his part to manipulate the girls.

Regardless of whether Reverend Parris was using the court for his own purposes or not it is widely accepted as part of the “Standard Narrative” that Emergent Capitalism played a role in increasing the furor of the Salem Witch Trials. Emergent Capitalism theory states that the reason the Salem Witch Trials were so much more intense and longer lasting then previous witch trials was because of the changing culture and classes due to the effects of Capitalism on a system that previously mainly ran on the Commune system.

The formerly powerful land owners were quickly becoming obsolescent as trade began to become a major part of Salem. This caused a large amount of resentment which fueled the fires even more. The Crucible does an excellent job at portraying the events of the Salem Witch Trials as an objective lesson, but fails whenever the specific details are focused on and it shows an obvious lack of background information. This is because the point of The Crucible was not to be historically accurate, but instead to draw comparisons between the Salem Witch Trials and McCarthyism.

In that case, the film and play do an excellent job of acting as a satire without overplaying any of the historical aspects he could have used to drive his point home. The Crucible strikes an excellent balance between historical accuracy and purposeful inaccuracy for its purpose and does not give a viewer any false ideas of what occurred that does not at least have some reason and accuracy behind them. 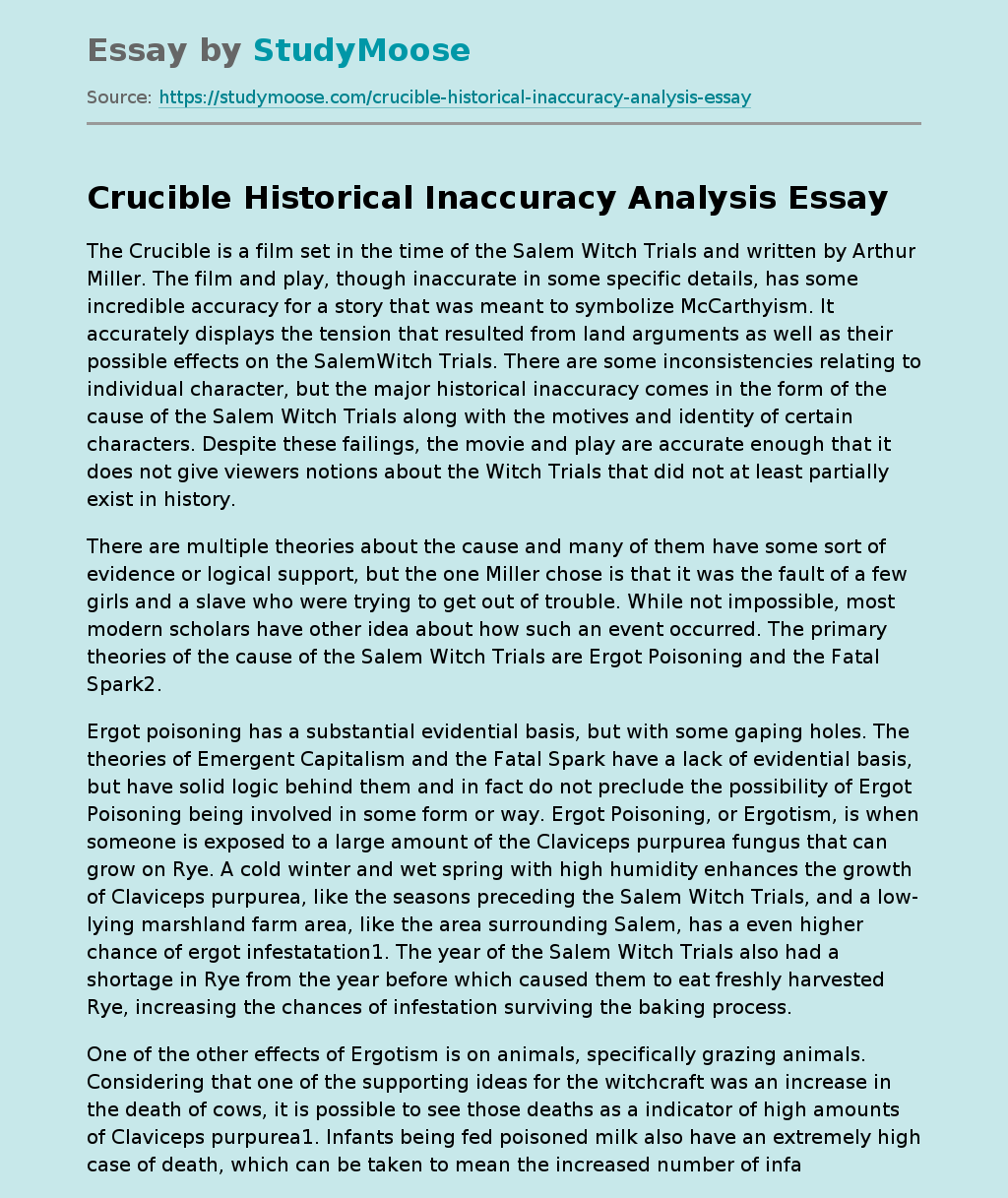