Sleuthing the Alamo: Davey Crockett’s Last Stand and Other Mysteries of the Texas Revolution is more about the issue of racism than it is about history itself. The author does make several good points and gives historical documentation to back up his points such as the diary of Jose` Enrique de la Pena.

However, the book has a lot of opinion mixed in with fact. Crisp does not get an overview of the battle of the Alamo from both sides but takes his opinion from the Mexican standpoint and the standpoint of a German soldier.

There is just enough fact to confuse a person who has not studied the history of the Alamo. Attention needs to be given to the few survivors of the Alamo on the Texas side. The whole first chapter of this book is devoted to the author’s childhood and racism during the civil rights movement which has nothing at all to do with the Alamo.

This being said, I would not read this book again due to so many factors that lean towards the author’s own opinion. The Alamo was a turning point in the history of Texas in its quest to become free and independent of Mexico.

Crisp does bring this point up and then turns it towards it being a racial war between Mexicans and Anglo-Saxons. The Alamo battle began February 23, 1836 and lasted 13 days until March 6, 1836. Crisp shows the account in the most part through the eyes of a Mexican soldier, de la Pena. According to de la Pena’s recount of the battle, the Alamo was a disgrace due to Santa Anna’s dictatorship and lack of compassion. There were seven hostages taken, including Davey Crockett, and they were immediately executed, according to de la Pena.

Historians have debated over this since the war ended. Crisp in his book is defending his point of view instead of giving complete factual evidence. This debate in this particular book is over whether Davey Crockett made a last stand or over whether or not he was captured. Crisp then goes into how the depiction of Davey Crockett has led to the misinterpretation that the fight was one of Anglo-Saxon’s against Mexican’s when in fact many of the Texan’s lost in this battle were of Mexican origin. Crisp also states there were no survivors.

There were no adult caucasian male survivors (it is questionable as to whether a slave named Joe was Travis’ slave or the slave of a cook in Santa Anna’s army). The accounts of the females and children who survived the Alamo are never mentioned in Crisp book. Most of the historic accounts were that of Mexican descent and a German named Herman Ehrenberg. This in itself makes the credibility of this work questionable. When Crisp is not trying to push racism in this book he is defending his point of view against another historian who wrote a book to defend Davey Crockett and his stand at the Alamo.

The other historian is Bill Groneman who wrote Death of a legend: The Myth and Mystery Surrounding the Death of Davey Crockett. In order to authenticate this book on historical fact the accounts of all documentation on the Alamo must be taken into account, including that of the survivors. The different documents that Crisp uses to defend his point of view he even has to speculate on the translation of the words from Spanish or German to English.

Crisp has done a lot of research to back up his point of view but the mere fact that there are discrepancies in language and that none of the Alamo survivors were even mentioned gives a wide margin for error and credibility. There needs to be a lot more research on the story from both sides of the fight before a conclusion can be drawn. In conclusion, this book would not be recommended as an authentic historical piece of literature. The beginning and end of the book is based solely in racism eluding the realities of what happened at the Alamo and why it happened.

Crisp is defending his own research rather than having a well-rounded historical book based on facts from all sides and he uses historical documents where there is a language barrier and therefore the translation is done with speculation. Crisp says in the book that there were no survivors of the Alamo when there were known survivors who did in fact do interviews and saw the massacre firsthand. This is not a recommended book to read for perspective on what happened at the Alamo. 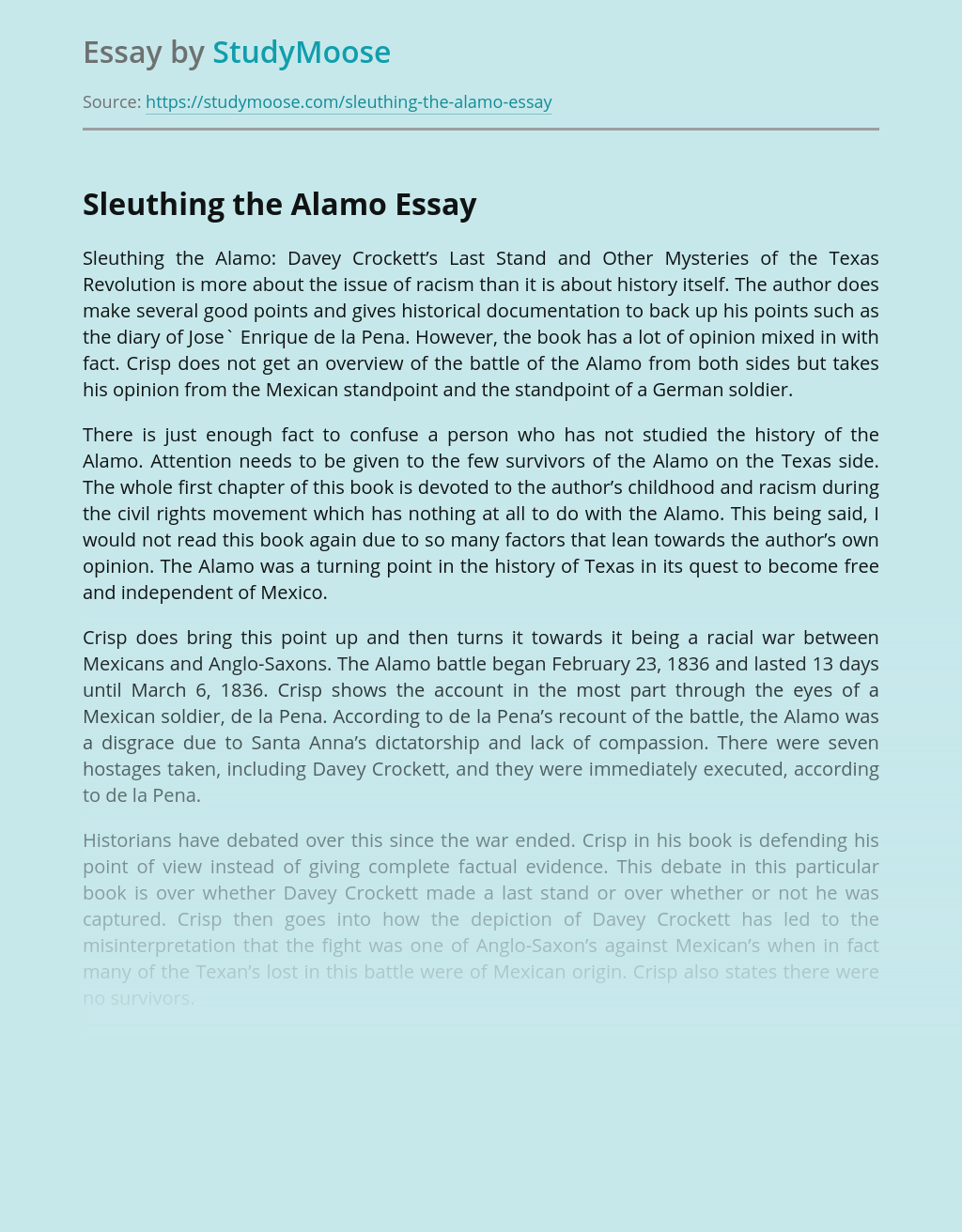