McCarthyism and the Crucible

Throughout history there have been many events that are direct parallels of each other. These parallels are evident in Joseph McCarthy’s, McCarthyism and in Arthur Miller’s, the Crucible. McCarthyism was the fear of communism that was created by the Wisconsin Senator Joseph McCarthy. This was a time of fear after the Second World War in the years 1950 through 1954. McCarthy had conducted hearings accusing people who were suspected of being related to communism. During these hearings, he forced people to give up names of other “followers” and if they refused to give names of others, they were imprisoned.

Don't use plagiarized sources. Get your custom essay on
“ McCarthyism and the Crucible ”
Get custom paper
NEW! smart matching with writer

In Arthur Miller’s, the Crucible it was a based off the Salem Witch Trials. This era had the same tactics of dealing with the supposed followers as McCarthyism, but in this case it was for witchcraft. Many people were accused of witchcraft and put to death for being related to the accusations. The Salem Witch Trials and McCarthyism were both examples of false accusations and public hysteria.

The Crucible and McCarthyism were both fueled by fear. In the onset of the Crucible, Abigail, a woman who was in love with John Proctor, began blaming people of being affiliated with witchcraft and communicating with the devil. She said, “She made me do it! She made Betty do it.. She makes me drink blood!” (Miller I.43). Abby had blamed Tituba about being a part of witchcraft and it soon lead to her death because she couldn’t plead innocent. During this time the courts would just blame you for being a part of witchcraft and it was almost impossible to prove your innocence.

Joseph McCarthy installed this fear into everyone because neither he nor the United States knew who was a communist or not. There had been spies that snuck into the states. The trust of people was lost and everyone was afraid of being accused themselves. In William Pfaffs, Revisionist View of McCarthyism Misses the Mark, he states, “McCarthyism was not about spies, it was about people who had been communist party members, or who had expresses pro-Communist or fellow traveling sympathies.” McCarthy had been cautious of the potential threats but he took it to far. It was almost impossible to prove your innocence. He made it so hard that to prove your innocence you had to tell the government about someone else who had affiliation with the communist life style.

McCarthyism and the Witch Trials had different ways of following through with their prosecutions. During the Salem Witch Trials, the people who were accused of witchcraft and denied their affiliation with the devil were hanged. There was no sympathy to the false accusitions they made. When John Proctor takes the blame for his own wife, to avoid her death he accepts the punishment but will not sign that he is affiliated, Hale says “Excellent is it enough he confess himself. Let him sign it, let him sign it.” (Miller IV.141) John Proctor believes that his word is worth the amount of his signature because if he were to sign he would be signing his life way. He would lose his dignity and eventually he lost his life. During McCarthyism nobody was killed for being accused. Most people were imprisoned and came out of prison with a bad reputation.

A major example of this was the Hollywood Ten. These were people in the filmmaking industry who were accused of communism. McCarthy assumed that they were affiliated because of their movies, or shows had hidden messages telling people to follow communism. After many court hearings these celebrities were convicted. In HCUA and The Hollywood Ten, “during and after the trials The Hollywood Ten were blacklisted. This meant that no one in the business would work with them for fear that they would be labeled a communist.” The Hollywood Ten lost their income because they had a lack of work and many of them received no further entry back into the film industry and also a bad reputation. Both of these historical events caused for public humiliation and fear.

McCarthyism and the Salem Witch Trials were very complex events in history. From false accusations, fear, public humiliation and also public hysteria, these two events played a big role in the history of the United States. McCarthyism was the fear of communism and in the Crucible it was the fear of witchcraft. The United States has faced many potential problems with fear and these two problems being an example of this concept. Both McCarthyism and the Salem Witch Trials were different events but show many correlations between each other.

McCarthyism and the Crucible. (2016, Mar 13). Retrieved from http://studymoose.com/mccarthyism-and-the-crucible-essay 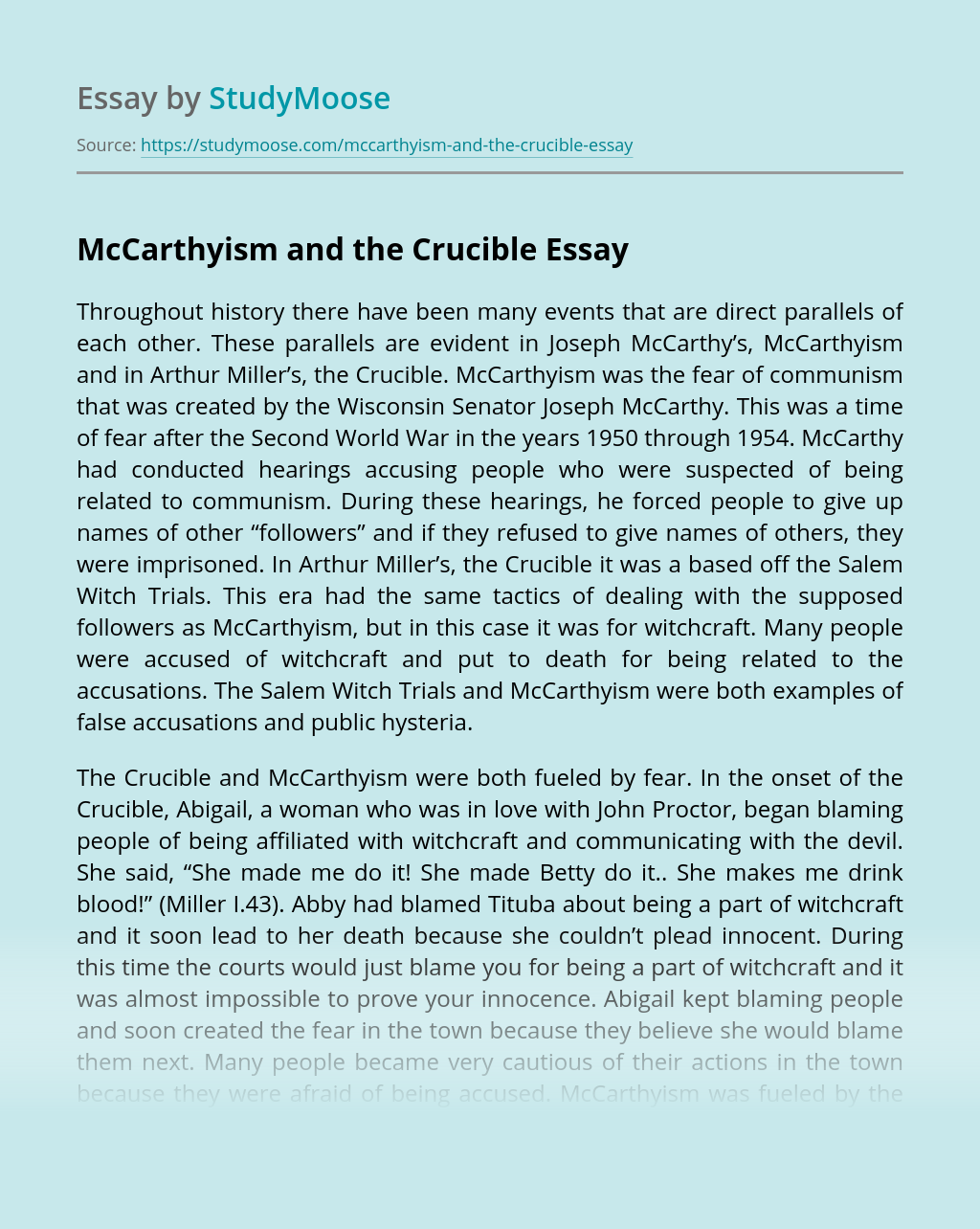