Analysis of "The Crucible" by Arthur Miller

The Crucible is more than a dramatic play; it has an underlying, yet obvious message. When The Crucible was written many people refused to think for themselves concerning the trials of prospected communist, and Arthur Miller was the first. In The Crucible, Arthur Miller, uses the Salem witch trials of 1692 to exhibit the dangerous McCarthyism, the bystander effect, and mass hysteria. In the 1950 Senator Joseph McCarthy said “The State Department is infested with communists.

I have here in my hand a list of 205…a list of names that were made known to the Secretary of State as being members of the Communist Party and who nevertheless are still working and shaping policy in the State Department.

Don't use plagiarized sources. Get your custom essay on
“ Analysis of “The Crucible” by Arthur Miller ”
Get custom paper
NEW! smart matching with writer

” (Griffith, Robert (1970). The Politics of Fear: Joseph R. McCarthy and the Senate. University of Massachusetts Press. pp. 49. ) This speech caused a mass man hunt to unveil, prosecute and punish all people thought to be working for the Soviet Union. The trials were very one sided, as were the Salem witch trials.

The people questioned were lead to a dead end. Confess and give name, a person is free, but if denied a charge or refused to answer the House committee on Un-American activities question the convicted would face jail time, or even death. These committees of the 1950’s are shockingly similar to the Salem witch trials nearly 250 years prior. The most famous people accused of espionage during this time period were the Hollywood Ten. This was a group of playwrights that were accused of espionage and later imprisoned for contempt because they kept silent during questioning.

Arthur Miller was one of the Hollywood ten. He wrote The Crucible to warm people, using a historic event, of the current mentality of the American people. One of the topics presented is the bystander effect. The bystander effect is when one sees immoral actions taking place, but fells mediocre and takes no action. The dark side of the bystander effect shows itself very strong in both The Crucible as well as the McCarthy hearings. One of the strongest examples of this phenomenon is found in act three during the trials. But you must understand, sir, that a person is either counted with this court or against it, there is no road in between. ” (Act III; P. 73) This line given by Danforth demonstrates the overall attitude of the court. One is either against it or opposes it, but the when the overall population is following the court it becomes very hard and discouraging to show any opposition to the authority. “They’ve come to overthrow the court, sir! ” (Act III; P. 82). This statement by Parris show that any opposition to the court was greatly frowned upon as Proctor was accused many times of trying to overthrow the court.

Since a villager was not allowed to question the actions of the court in any way the opted to stand by the side and allow the murder of dozens of innocent people. The bystander effect was very prevalent in the McCarthy era as well. As in The Crucible community members accused their own neighbors so that they could avoid prosecution. Instead of trying to stop the imprisonment of innocent human beings the American people did what they could do to save themselves and then stood by the side to watch their own friend’s lives be ruined. Second, in writing The Crucible Miller exemplifies the dangerous of mass hysteria.

Mass hysteria is when a large amount of people share the same fear and began taking drastic actions as a whole. Mass hysteria is caused by a group of people, or one person panicking causing an even larger group of people to panic commonly for no reason. An example of this is from more current times. In January of this year 12 girls became ill with touretes at the same for no apparent reason. After these 12 girls showed symptoms more began having the same the same symptoms. After an investigation no medical cause was found but the strange desiese called mass hysteria.

In The Crucible act 1 Hale is trying to get names of other people involved in witchcraft when he says “[Tituba] the Devil is out and preying on her [Abigail] like a beast upon the flesh of a pure lamb. ” After the girls are sick from trying to conjure spirits Hale and the other villagers set about to put witch craft to a stop. While doing this the entire town enters a hysteric state and no one can be trusted. These actions are very relatable to the McCarthyism of 1950 because McCarty’s speech sent the American people into a wild spiral wide in which they suspected everyone was a communist.

Arthur Miller was suspected of being a communist in the McCarthy trials of 1950. The trials started by the mass hysteria of the possibility of soviet spies lying deep within our country’s woodwork and this fire was fueled by the people that did nothing to stop these crimes against humanity, the prosecution of hundreds of innocent souls. Arthur Miller wrote The Crucible to show what these same exact actions and lack of actions did to people in 1692 with the ultimate goal to stop these prosecutions driven dark desires and hidden agendas.

Analysis of "The Crucible" by Arthur Miller. (2016, Sep 10). Retrieved from https://studymoose.com/the-crucible-3-essay 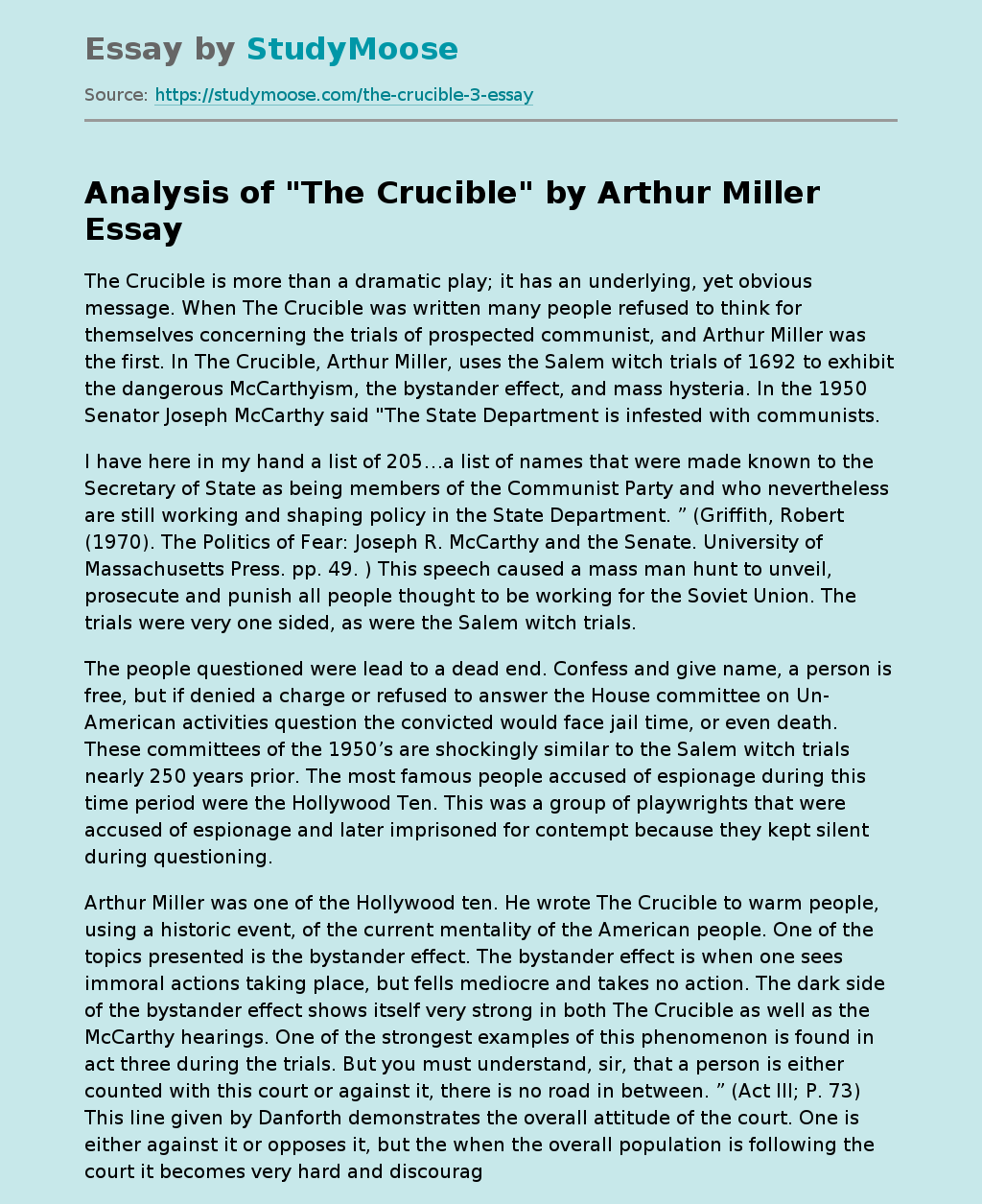