When we were younger we might have been homesick at school camps or sleepovers at someone that is not family. But we were lucky for the next day we would return to our family’s embrace but there are people out in the world that suffer from nostalgia for years and decades before being able to see their hometown again. In

Nostalgia by Carol Ann Duffy, the mercenaries, strong brave men, described in the poem are tormented by the same feeling of nostalgia.

Turn in your highest-quality paper
Get a qualified writer to help you with
“ “Nostalgia” by Carol Ann Duffy ”
Get high-quality paper
NEW! AI matching with writer

In the new land they find it hard to adapt but when they return their home has changed as well. They feel like strangers to everyplace they go. Using sound devices, structure, diction and language techniques, Carol An. Duffy presents a sentimental story of the mercenaries from Switzerland fighting in a foreign land.

The author uses examples of repetition and other language techniques to give the most possible amount of impact on describing the feelings and thoughts of the mercenaries from Switzerland.

When they decided to leave and began their journey, the repeated use of ‘leaving’ (1,2) indicates the hard choice of leaving, this idea is emphasised by contrasting the description of home as high, fine air (1,2) with the process of leaving described as ‘down, down’ (1,3). The double use of ‘down’ also expresses the feeling of the mercenaries leaving their further and further. The harsh constanent sound in ‘crude coins clenched’ (1,4) emphasise that coins were not worth the sacrifice made by not living in the homeland. The caesura (1,3) was drawing a boundary line between home and new land, it seemed to express that once you pass this mark there is no going back.

By including a range of language techniques in the poem, the mercenaries are presented to have found it hard to acclimate to the new environment while the memories of their home were still lingering in their minds. The anaphora on ‘wrong’ (1,6) was always followed by a word that indicates all five senses (Smell, Sight, Touch, Taste, Sound). The amount of ‘dull crude coins’ (1,4) that don’t seem to match the risks and the quantity of times they have to put their lives into danger. The coins that are ‘clenched in the teeth’ (1,4) seem to express that the mercenaries are worried about the value of the coins and biting them to see if it is real gold.

Later they feel ‘stones in the belly’ (1,5) which not only symbolises they are not digesting the food but the heavy stones are also in contrast with ‘high fine air'(1,2), this shows that their minds seem to have never fully left the homeland. ‘Here’ (1,7) that is written in italics indicates the heart, specifically defining the area of pain. The mercenaries that ‘pined, wept’ (1,9) although they were ‘strong men’ (1,9) feared by the enemy, they were growing weak under the torment of nostalgia. The nostalgia was ‘killing them’ (1,9), the past continuous tense applied here is implying that the pain is still going on, torturing the supposedly strong mercenaries.

Carol Ann Duffy portrayed a perfect ‘sweet pain’ when a flashback on the warm and safe home flickers in a mercenary’s head. ‘Sweet’ (2,3) stood for the loving memories of the past, ‘pain’ (2,3) represented the sadness that is felt when the memories are compared to their current state or the hopelessness of not being able to return to the affectionate arm of what we call _home._ Again the five senses are used when describing the longing for home -‘music, pipes,light’ (2,6). ‘Plains’ (2,6) is contrasted with ‘mountains’ (1,2) of home, the poem continuously relates back to home emphasising how hard it is to completely put home behind your back.

The continued alliteration of the sound ‘h’ (2,3) seemed to be communicating sighs of the depressed mercenaries. The flashback (2,7) contained words like ‘maybe’ (2,7) which indicted the unreliability of the memories, but the concrete elements just seem to make you consider that the memory was real. The sense of having nobody to protect him is compared with the ‘mother’ (2,9) who is usually the family member that cares for the children more than the father. It is also very touching to remind yourself of the happy times spent with mum. Carol uses many senses to describe the pull from and the urge to go back to safety.

After years of yearning to go back because of nostalgia, the mercenaries’ story touched hearts of everyone in the village. They thought they were returning to the land of their memories but unfortunately everything has changed, although the place is still the same, the mercenaries must adapt again to something new. The ‘chiming’ indicated that hope was going back into their hearts but the change ends it all. They returned with ‘their life in a sack on their back’ (3,8) shows that in order to get that money they risked their lives, this emphasises how grateful the mercenaries felt to return home, land of safety.

All their time of their golden age was spent under the shadow of murder and war, so ‘some will not fall in love had they not heard of love’ (3,2) .The home that never changes in one’s memory, the ‘workings of memory’ (3,4), the pictures that never change in the heart was implied when anaphora was applied on the word ‘same’ (3,9). The anaphora was also contrasted with the ending ‘everything changed’ (3,10). The ‘priest’ cried, although he was the one that was supposed to give blessings of joy but he couldn’t help but become touched by the mercenaries’ story. The schoolteacher ‘opened a book to the scent of her youth’ when she remembered the time the mercenaries were just playful kids, happy and innocent.

The mercenaries felt like a strangers to their environment even though it was their own home. Carol Ann Duffy used a range of language techniques, symbolism and diction to make readers engage in the power of nostalgia through the story of the mercenaries, of how strong and feared men became weak when confronted by this sensation. The poem Nostalgia, written by Carol Ann Duffy presented a strong theme of that although the place and buildings have not changed, time has passed and the person has changed. Now it can never be the same. The past is lost….. ..forever. 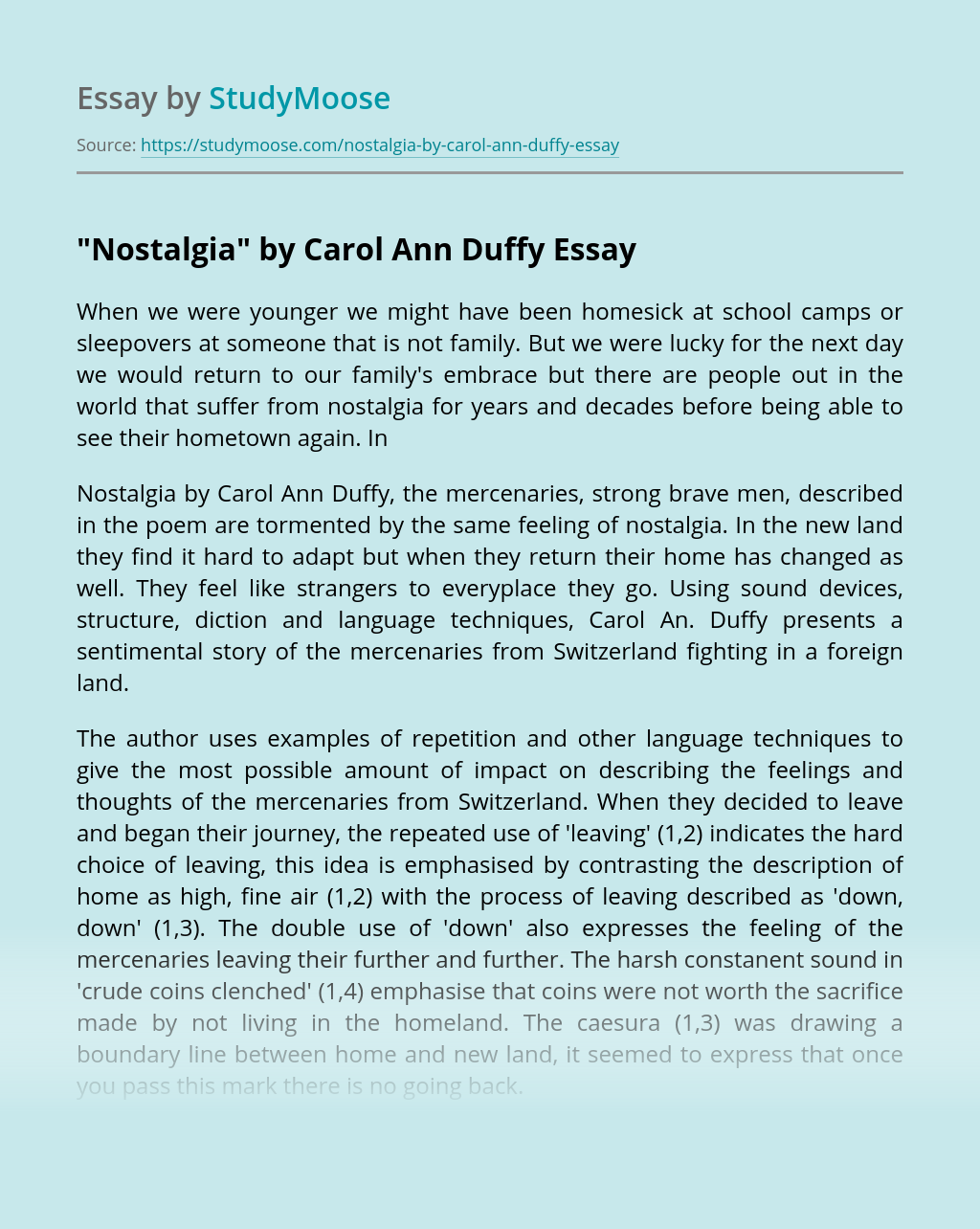 Turn in your highest-quality paper
Get a qualified writer to help you with
“ “Nostalgia” by Carol Ann Duffy ”
Get high-quality paper
Helping students since 2015
Stay Safe, Stay Original