Summary of Smaller and Smaller Circles

The novel begins with the discovery of a series of murders around the Payatas dumpsite in Quezon City. These discoveries imply that a serial killer is on the loose, and many are lead to believe so. What is unusual about these murder cases is that all of the victims (young boys) are mutilated instead of just being killed. Their faces are neatly peeled off from their skulls and their hearts and genitals removed from their bodies.

Father Emil, the parish priest of the area who discovers one of the victim’s bodies at the beginning of the first chapter, provides these details to Jesuit priests Gus Saenz and Jerome Lucero, a forensic pathologist and a clinical psychologist respectively.

The two scientists are working on this case together with the National Bureau of Investigation (NBI), whose inefficiency becomes one of the major themes of the novel. As the priests proceed with the investigation, they are forced to overcome several challenges, particularly skepticism and mocking of Atty.

Ben Arcinas, the head of NBI’s investigating team. Figuring out the plans and intentions of a psychologically disturbed killer, especially if he’s very good at concealing it, is fairly difficult. The sleuths go through some complicated twists in their quest to find truth and justice amidst the media-hungry personalities who don’t give much attention to the case. The partners also work with Joanna Bonifacio, an investigative journalist who uses her skills to gather information from the bureaucracy.

The two priests pursued the investigations of the crimes, confirming all the evidences left by the killer on the corpses especially the fact that he kills with precision and with symbols: he defaces his victims, and excises the genitals.

They considered these signs that there is a sexual conflict and a need to get rid of the identity of the kids. Throughout the middle part of the novel, the readers are given glimpses of the lives of the young victims and how their families are affected by the murders.

The investigators get a chance to visit the Payatas area and suspect that the killer is one of the people involved in the kids’ health care. They soon learn about a mobile dental clinic that offers free dental services to poor kids in the area, and the priests investigate the clinic for dental records of the victims. After seeing the similarity between the shape of the marks made on the victims’ skulls and the dentist’s instruments, the forensic scientists are sent hot on the suspect’s tracks. The later part of the novel focuses on the murderer’s life in the past. The eaders are given a background about him that will also serve as the explanation for his behaviour.

As the priests continue with the investigation and identify the suspect to be Alex Carlos, the dentist in the mobile clinic at the Payatas area. They visit his parents and learn that Carlos was sexually abused by his PE teacher when he was in high school. Although he has already killed his teacher using the same process, Carlos feels that this is not enough. He continues his murder spree, and as a way of bringing out his revenge, he kills boys at his age during the abuse.

In the last, and perhaps most important scene of the novel, the murderer is shown to be hiding in the mobile clinic after killing his last victim. The two Jesuit priests are the ones who begin the approach, and after much struggling, the suspect meets his final demise. Alex Carlos is shot by the NBI troops situated outside the van. The novel ends with the two main characters visiting the dentist’s grave. The younger priest Father Lucero is shown thinking deeply about Carlos’ last words and feels sorry, knowing that the latter did not intend to live the life he lived.

Summary of Smaller and Smaller Circles. (2016, Dec 29). Retrieved from http://studymoose.com/summary-of-smaller-and-smaller-circles-essay 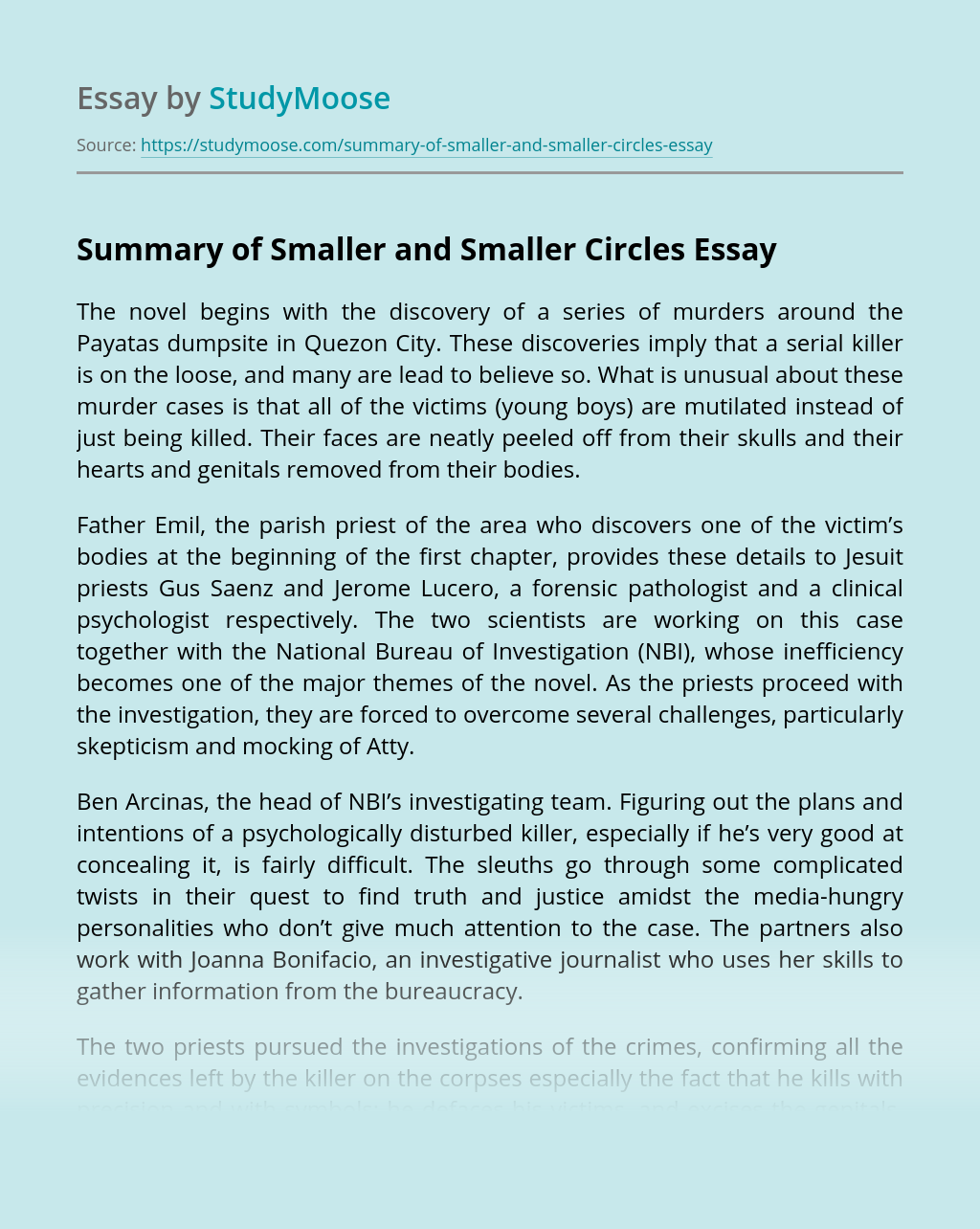 Don’t waste time
Get a verified expert to help you with Summary of Smaller and Smaller Circles
Hire verified expert
$35.80 for a 2-page paper
Stay Safe, Stay Original