Abraham Maslow is a well-known psychologist for his theory on human motivation, specifically the Hierarchy of needs theory, and for his work with monkeys. Maslow’s theory can also be defined as “intensity at a task”. This means that greater the motivation, the more constant and intense one will perform s specific task. The basis behind this theory is the knowledge that all behaviour is goal driven, meaning one will do tasks according to what they obtain after the task is complete.

Don't use plagiarized sources. Get your custom essay on
“ Abraham Maslow – Hierarchy of Needs ”
Get custom paper
NEW! smart matching with writer

Maslow has been a very inspirational figure in personality theories.

The Hierarchy of Needs theory has four different levels before one comes to full self-actualizing. These levels are, in order, the psychological needs, safety, love and care and esteem needs. The psychological needs are those one needs to survive, such as food, water, oxygen, shelter and more. Then comes the need for safety and protection for one’s family’ these needs include safe shelter, security, protection from both mental and physical damage, and others.

Thirdly is the need for love and care, which is the need for affection, friends and relationships in general. Lastly, the esteem needs. These needs are those that one gets from him or herself. There are two types, low self esteem and a high self esteem. The low self esteem needs include wanting the respect of others, status, fame, recognition and even dominance. The high self-esteem need is to have respect for yourself; this is the higher of the two self-esteems because self-respect is harder to loose than the respect of others.

Self-actualization is to have all of the needs fulfilled and to be settled with a good job. According to Maslow, a person who is fully self-actualized, have the following character traits. According to his research, e stated that self-actualizers tend to be reality centred, meaning these people can distinguish between what is fake and dishonest from what is real and true. They were problem centred; people treated life’s difficulties as problems demanding solutions, the need for privacy and they were independent of culture and relied on their own experiences and judgments; they were, in the best sense, non conformists. Those who were self-actualized had democratic values; open to ethnic and individual variety, social interest and they enjoyed having intimate personal relationships with a few close friends.

Maslow recorded these findings by observing a group of historical figures, which included Abraham Lincoln, Mahatma Ghandi, Albert Einstein and others. In his findings, he also stated that self-actualizers have a pacifist sense of humour, which means they would rather tell jokes about themselves or at the world in general rather than at others. These people accepted people for who they were; they didn’t try to change them to what they thought each person should be like and they prefer being themselves than being pretentious or artificial.

With all these high-quality traits, there were some flaws with the self-actualizers studied by Maslow. These flaws were that the subjects that were being tested on suffered from anxiety and guilt. Some of them were absentminded, overly kind and, lastly, they had unexpected moments of ruthlessness and a loss of humour.

All of these findings of Maslow have created a basic understanding of what things are necessities to humans and which are not. For example, in the 1960’s, this was most important to those who were looking for meaning and purpose in their lives. This theory helped them look for a path to lead their life to success.

Maslow’s theory was also inspirational to Mihalyi Csikeszentmihalyi and Douglas McGregor. Mihalyi Csikeszentmihalyi continued Maslow’s concept of “flow.” This theory helped Douglas McGregor to make his theory of Theory X and Theory Y by being a building block. Without Maslow’s hierarchy of needs theory, these two people may not have come up with the idea/theory that they did.

It is said that Maslow’s hierarchy of needs follows the life cycle of humans. The first stage, psychological needs is a newborn baby’s needs, safety comes as the baby begins to crawl and walk, the social aspect come in when the baby is a toddler, they seek attention by doing something that no one has seen before and amazes the audience. The fourth need, esteem or ego, comes when humans are teenagers; this means when humans are concerned with respect and popularity and only some humans go on to self-actualizing. Maslow’s theory being related to the development of human’s helps for humans to realize how his theory really does work and how it intertwines with the development of humans.

Another way that Maslow’s was inspirational was, for example, the reason why humans wake up in the morning and what motivates us to do so. Maslow’s theory states that by accomplishing goals, people motivate themselves to do even more. When a person is on the rise of success or promotion or an increase in business profits, they are excited and they motivate themselves to get up in the morning and to do more to get more excitement.

Lastly, Maslow’s theory was a great importance to education. His theory applies to education because if the teacher wants to maximize the effectiveness of teaching programs around the schools and individual classrooms, the administrators must consider what the children want first. If the students feel that the workload is extremely heavy, then administration staff and teachers should take this into account and either lower the workload or give longer due dates for the students to finish their work. This gives the students encouragement to do their work as they realize the teacher has taken our problem into consideration and has given us what we asked for.

Those teachers who know their students needs use this theory and are successful teachers. Both the administration and student body like these teachers; administration is happy that students are doing their work mostly on time and the student body like the teacher because he/she cooperates and listens to what they have to say. Thus Maslow’s theory has had an impact on the teaching styles of teachers in order to cope with the students.

In conclusion, Maslow’s theory is inspirational not only to teachings but also to everyday life. His theory helped everyone in society to realize basic needs of life and to spend their money and time where it is most needed and worry about the luxuries after the necessities are complete. Without this inspirational theory created by Maslow, people around the world may not know what the basic needs of life are. For example, the third world countries and first world countries would have even less in common than what they do today. At least today they have the same basic needs, maybe without this theory even this would be different. Therefore, Abraham Maslow as an inspirational psychologist who has lead us to the right way of spending money and time. 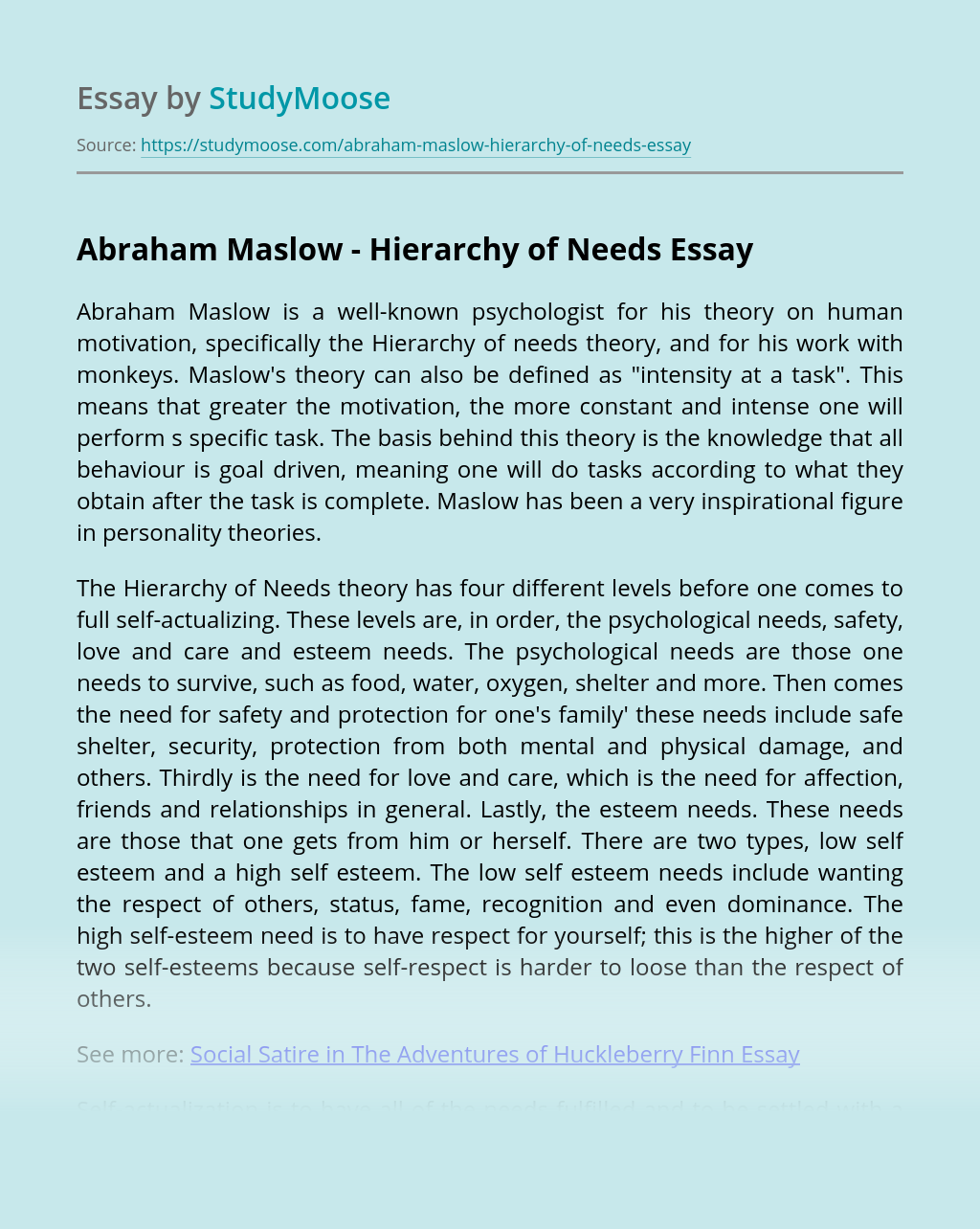