Heart of Darkness – An Allegory? Essay

Heart of Darkness is in its entirety not an allegory. Its surface is too profound and meaningful to allow itself to be interpreted in more than two ways. There are however several parts in the novel that hint at the opposite and that prove that the context of the novel can be seen from more than one angle.

This can mainly be perceived in the life of Mr. Kurtz, as his descent into madness can be seen as an allegory for the colonization and destruction of the African continent and its people by the Europeans.

Don't use plagiarized sources.
Get Your Custom Essay on Heart of Darkness – An Allegory? Just from $13,9/Page

Because just as Kurtz was a perfectly sane and normal man before he went into the African wilderness so were also the European nations very civilized before they came to Africa. And just as the nations of Europe governed Africa and its people without rules and restrictions so did isolation compel Mr. Kurtz to live his life without boundaries. Proof of this can be found on page 83, “His mother was half-English his father was half-French.

All of Europe contributed to the making of Kurtz.” This shows that Kurtz can be seen as a symbol of Europe, as he is the typical European explorer – ambitious, greedy and adventurous.

And if Kurtz is Europe embodied then it would be quite logical that Africa should be represented by the “harlequin” (p.87) his faithful Russian comrade. Their relation greatly resembles that of the relation between Africa and Europe, although the African people act quite differently to their “masters” compared to how the Russian acted towards Kurtz. The similarities lay in how the master treats the subordinate. “He wanted to shoot me too one day….I had a small lot of ivory…he wanted it, and wouldn’t hear reason…and there was nothing on earth to prevent him killing whom he jolly well pleased.”(p.92). The way Kurtz treats the Russian is mirrored in the way the Europeans governed Africa and extracted its riches. They stopped at nothing to make their colonies as effective and prosperous as possible. This of course included killing any opposition, or in the words of Conrad, killing whoever they jolly well pleased.

In conclusion it can be said that the two voyages in Heart of Darkness, the one in the mind and the one on the Congo River, are not as much an allegory as they are descriptions of two separate, but still closely linked, plot developments. For example, as the company sails ever closer to Kurtz and the heart of the African jungle Marlow’s internal voyage alters his morals and opinions according to his experiences. This might seem as an allegory to some, as it features two separate levels, one relatively superficial the other underlying and sometimes also very symbolic, as when Kurtz is portrayed as a devil.

However the novel misses out on the most important aspect of an allegory, that of it having a layer used only to represent or suggest other elements, often abstract, than those found in the main story. So although Heart of Darkness contains much symbolism and dual meanings, it falls short of being a true allegory of anything, but perhaps the voyage of Mr. Kurtz soul.

Heart of Darkness – An Allegory?. (2016, Jul 15). Retrieved from https://studymoose.com/heart-of-darkness-an-allegory-essay 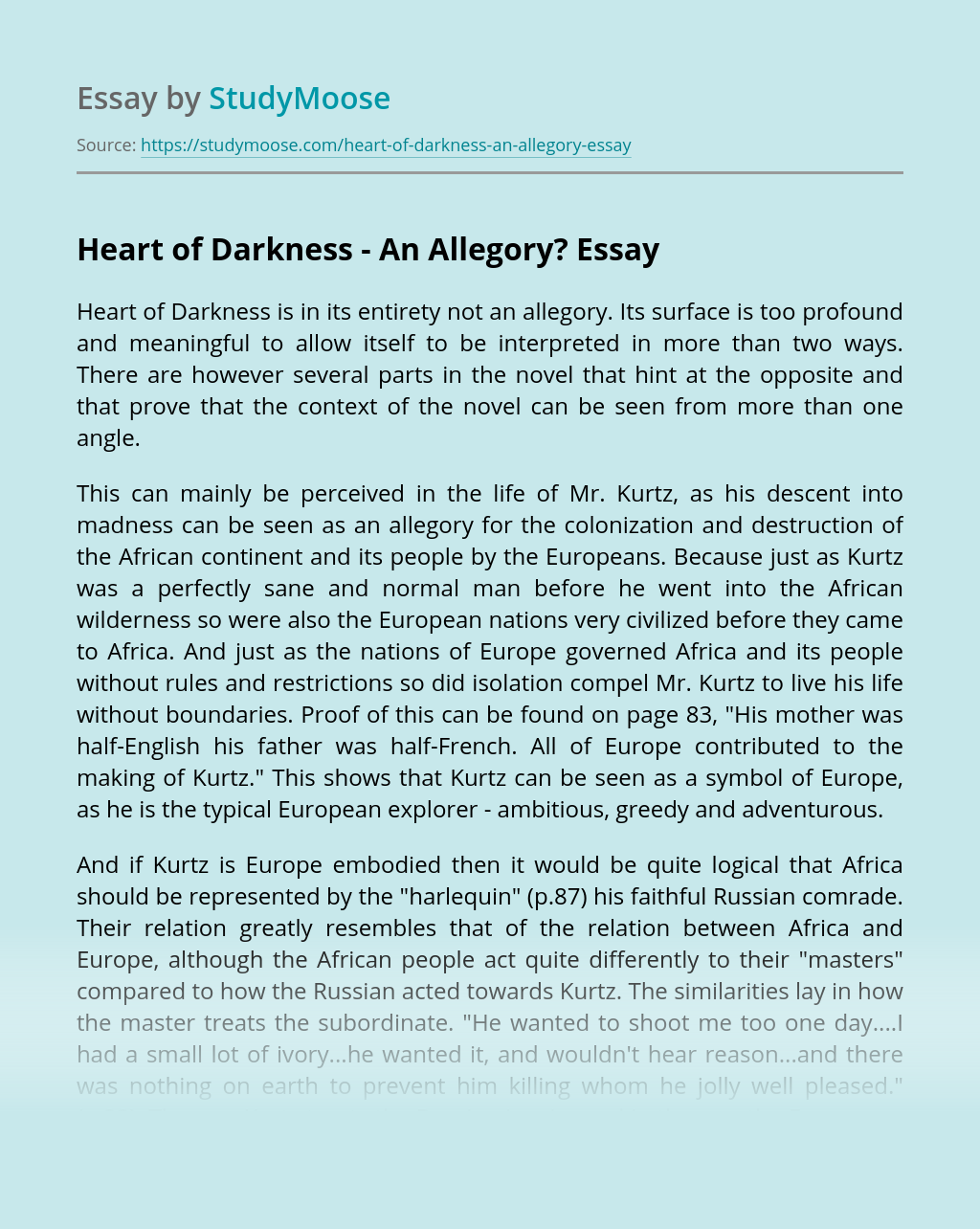 Competition among hotel and hospitality business has increased enormously as customers are getting more educated and fashionable. They’ve been demanding more luxurious services and products which urge organisations to focus on better marketing and strategic planning. Hotels and firms now believe that personal and strong relationships with potential customers is key to competitive advantage in... VIEW ESSAY

View sample
Can it be that I am a sex addict?When the longing for

Can it be that I am a sex addict? When the longing for sex is great in one and small in the other, it becomes difficult in the relationship. Is there a standard of sexual desire? By Angelika Eck Greta S., 29: I would be interested in the question of when one is considered “addicted... VIEW ESSAY

Malaysia was known as “Suvarnabhumi” to the Indian, Chinese and European traders. Changes of economical factors in Europe in the 18th century pushed European countries such as France , British and Germany to compete against each other to rule a country with unlimited raw materials. The arrival of the foreign rulers changed Malaya’s economical factor... VIEW ESSAY

The article “A Framework for Thinking Ethically” analyzes the main concept of ethics. The authors explores the arguments of what ethics is and what ethic is not, why ethics is important, five sources of ethical standards, and advises a 10-step framework for making ethical decisions. First, this article helps identify what ethics is not. It... VIEW ESSAY

View sample
Cause and solution of environmental degradation