The Lion, the Witch, and the Wardrobe

Turn in your highest-quality paper
Get a qualified writer to help you with
“ The Lion, the Witch, and the Wardrobe ”
Get high-quality paper
NEW! AI matching with writer

The story traces how each of the children (who, when compared, seem to greatly contrast each other) end up developing during the course of their journey. One great transformation happens to the oldest child: Peter. From the beginning he seems to be filled with many qualities that one would find in a good leader, yet his leadership ability is still able to grow even greater as the story progresses (McCarthy).

This growth can be seen when he shows good judgment by deciding to stay in Narnia to try and rescue his brother Edmund. He also has the honor to take joint responsibility when Edmund ends up trying to betray them by saying, “It’s my fault really. I was too hard on him” (The Chronicles of Narnia: The Lion, the Witch and the Wardrobe). Peter also shows great wisdom and bravery throughout their adventure, but does not develop courage in the face of great danger until much later in the story.

This courage is displayed when he is given command over Aslan’s forces and rises to the challenge of leading the attack against the White Witch and her army. This battle tests Peter’s leadership, and when he succeeds he is able to step back out of the wardrobe as a man greatly changed from the boy he was at the beginning of their journey (McCarthy). In the end, the courage his character originally lacked becomes one of his most admired qualities and possibly his greatest strength (The Chronicles of Narnia: The Lion, the Witch and the Wardrobe).

Susan Pevensie, Peter’s sister and second oldest of the family, contrasts with her older sibling in a variety of ways. First off, she has very few leadership qualities and, instead, is very practical. Susan uses maternal control over her brothers and sisters and displays a very cautious nature throughout their journey in Narnia. When they first start off on the adventure, she is the one always trying to be realistic. Since she seems weighed down with the responsibility of looking after her siblings, she also comes off as thinking she is too old to believe in Narnia at the beginning of the story (The Chronicles of Narnia: The Lion, the Witch and the Wardrobe). However, she eventually opens up more to the idea of being in this mythical land, and towards the end becomes unafraid of being more like a child. Before this change her cautiousness causes her to always be the one recommending they go home where it is safe every time they sense danger. Although, once she makes this transition, Susan grows from being so self-centered to being much braver (McCarthy). In fact, when she watches Aslan being tortured and killed she undergoes another transformation and starts having compassion for others, a trait she seems to carry on with her (“Character List”).

Disliking the superiority of his brother Peter and the motherly control of his sister Susan, Edmund, the second youngest of the Pevensies, is the character who comes dangerously close to joining forces with the White Witch. He is also the one who goes through the most drastic change in the story (“Character List”). At the beginning, Edmund is a very mischievous young boy who enjoys the endless teasing of his younger sister Lucy. In fact, he demonstrates dishonesty and selfishness by denying her story to Susan and Peter about Narnia’s existencec (Lewis 45; ch. 4). However, once they discover that he lied they get so angry that Edmund ends up resenting them, which, in a way, pushes him more towards the White Witch (Brennan). He seems driven to help her by his desire for power, and does not realize until closer to the end of the story just how evil she really is.

The Lion, the Witch, and the Wardrobe. (2016, Apr 07). Retrieved from https://studymoose.com/the-lion-the-witch-and-the-wardrobe-essay 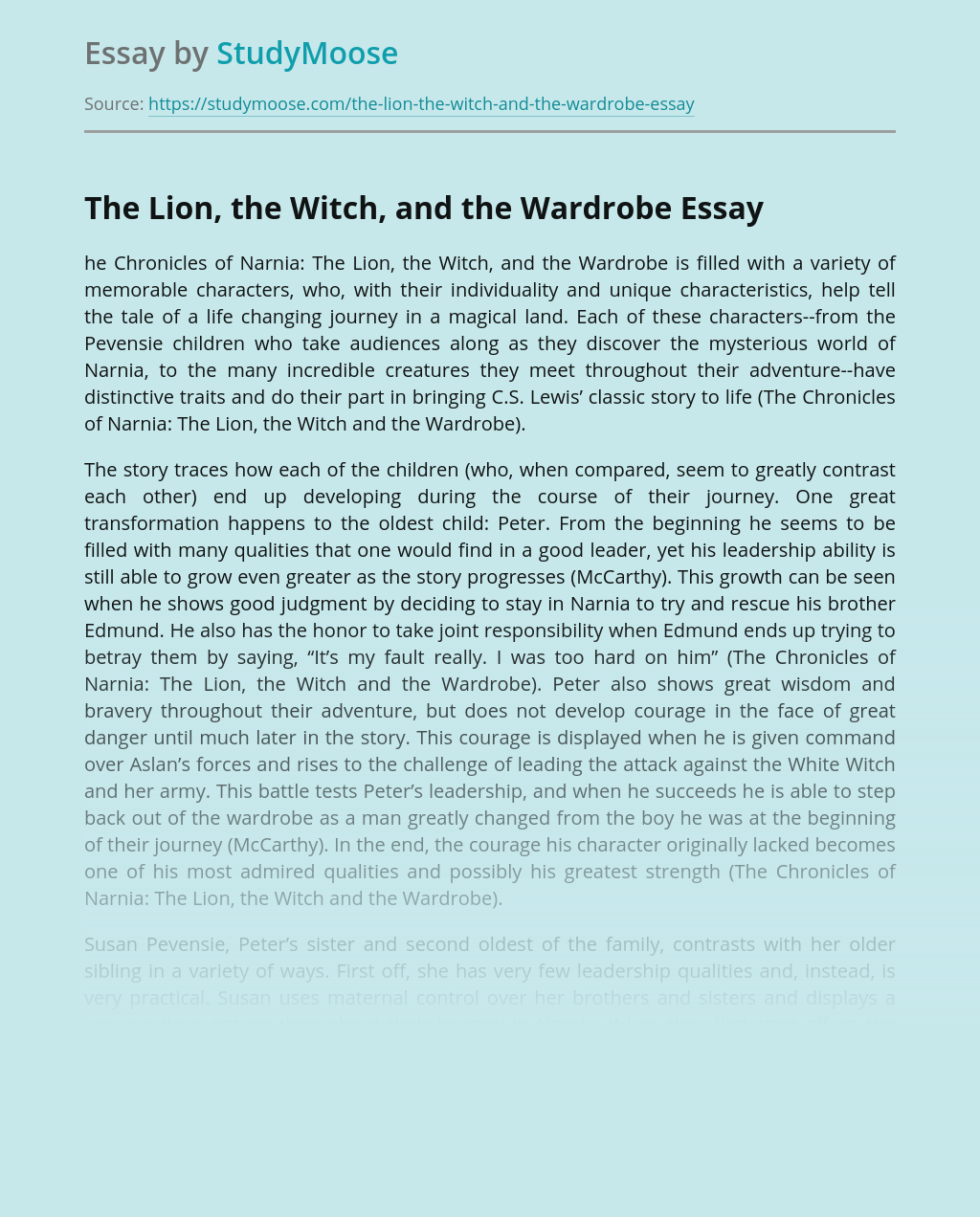 Turn in your highest-quality paper
Get a qualified writer to help you with
“ The Lion, the Witch, and the Wardrobe ”
Get high-quality paper
Helping students since 2015
Stay Safe, Stay Original