Secondhand Lions and the Secret Lion

Identify one flat character and one round character from either short story or the film. Explain why you believe your choices fits the criteria for these two types of characters. Every story has to have a round character. A round character is a major character that changes throughout the story. I think that Walter is a round character because the story revolves around him and he changes from being a scared and innocent kid to a free and independent kid. He understands what’s right and what’s wrong.

Turn in your highest-quality paper
Get a qualified writer to help you with
“ Secondhand Lions and the Secret Lion ”
Get high-quality paper
NEW! AI matching with writer

Situational irony is a situation in the story that goes opposite to what was suppose to happen, In other words a sharp turn in the other direction. A situation that I thought was a situational irony in the movie was when the lion attacked the man to protect Walter and it died instead of the man. How does the structure of “Secondhand Lions” compare to the classic literary plot line? Illustrate your response by including a graph showing the movie v.

the classical plot line. idk Who is telling the story in “Secondhand Lions” and “The Secret Lion”? Is it a first person narrator or a third person narrator?

How would the stories have been affected if a different point of view had been used? In the story “Second hand lions” it was a third person narration and in “The secret lion” it was a first person narration. I think the stories would have been affected greatly if the point of view changes. I think that changing the point of view of the story might reduce some of its effectiveness. The action during the plot of the story may affect different characters in a different way. Different characters may show a deeper meaning behind the story. Assume you’re Walter in “Secondhand Lions. What was your motivation for jumping out of the car and returning to your uncles’ ranch? [Answer as if you were writing a note to your mom, Mae. ] My motivation for jumping out of the car and returning to my uncles ranch was that my mother was going to marry somebody that hit me! For her own good. So, I thought that if I stayed in that car I would have been trapped for the rest of my life.

So I decided to jump out and go to my uncle’s ranch and life a free and fun life. Identify the use of symbolism in “The Secret Lion. ” Choose what you consider to be a main symbol ? nd identify what the symbol represents. Why did the author choose to use this symbol? The lion, or more specifically a secret lion, the river, and the grinding ball are all symbols used in the story to reinforce the theme of coming of age. Coming of age is a time of rebellion, and the river symbolizes a way, and a place, to rebel. It also symbolizes the many discoveries they will make before they are grown up, and more importantly the changing and evolution of perception. The arroyo does not change throughout the years, but the view of what it is does.

Secondhand Lions and the Secret Lion. (2016, Oct 09). Retrieved from https://studymoose.com/secondhand-lions-and-the-secret-lion-essay 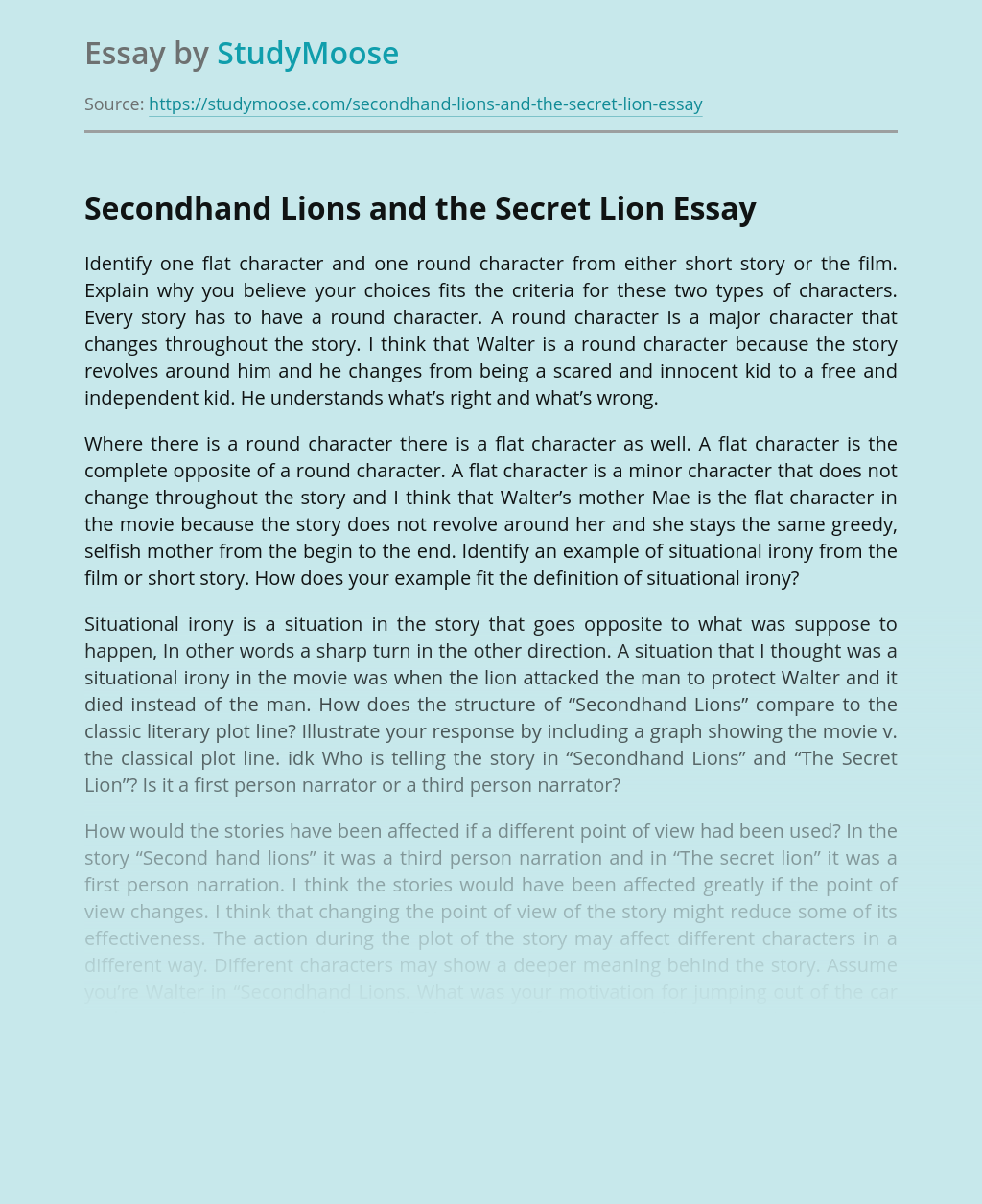 Turn in your highest-quality paper
Get a qualified writer to help you with
“ Secondhand Lions and the Secret Lion ”
Get high-quality paper
Helping students since 2015
Stay Safe, Stay Original