The two eldest daughters of Lear, Goneril and Regan, are portrayed as villains from the start of the novel. From the flattering of love to Lear for the part of his kingdom, to the poisoning of Regan and the suicide of Goneril, the developments in villainy of both the sisters increase with every scene. This increase in villainy is the result of their lust for power throughout the novel.

Goneril, the oldest daughter, develops drastically as the story progresses. She is ruthless, amoral and jealous.

Don't use plagiarized sources. Get your custom essay on
“ Character Development “Goneril and Regan” ”
Get custom paper
NEW! smart matching with writer

“Sir, I love you more than words can wield the matter;/Dearer than eye-sight, space, and liberty;/Beyond what can be valued, rich or rare;/No less than life, with grace, health, beauty, honour;” (1.1.60-64) If we look at Act 1, Scene 1, when Lear was dividing his land, she praises him an extra bit, however not true, for a little extra of his land. As readers, we can pick up on the fact that she is not true of her saying, and is overzealous for power and land.

However at the end of the scene, after Cordelia and France leave, she and her sister plan of how to get Lear out of their homes.

In Act 1, Scene 3, Goneril tells her steward, Oswald, “Put on what weary negligence you please/you and your fellows; I’ll have it come to question:/If he dislike it, let him to our sister” (1.3.13-15). We read here that, Goneril doesn’t want to bother with Lear in her castle, so she tells Oswald to ignore Lear and his knights and to let him leave if his service does not please Lear.

As Lear enters the castle, his knights start to cause a scene before Oswald enters and tells them to quiet down. As they start harassing Goneril’s servants, she tells Lear to either dismiss all his knights or to leave. Here, the readers are given to think that she is evil and just wants to get rid of Lear; however her argument can be justified.

Think of Lear’s knights as out of control party boys – breaking her furniture and harassing Goneril’s female servants. When Lear loses his composure and prays to the gods that she won’t be able to have children for criticizing his entourage and telling him to leave, it looks like he’s the one being unreasonable, not Goneril. However, any sympathy that the audience can muster for them evaporates quickly, first when they turn their father out into the storm at the end of Act 2.

This house is little: the old man and his people

‘Tis his own blame; hath put himself from rest,

And must needs taste his folly.

For his particular, I’ll receive him gladly,

But not one follower.

Regan, on the other hand, is slightly less evil as the readers find out near the end of the novel. She is very similar in characteristics as Goneril except slightly more passive and she gets other men to do her dirty work for her. We see this is Act 3, Scene 7, when Regan begs for Cornwall, her husband, to gouge out Gloucester’s eyes. However, she does kill the servant that tries to defend Gloucester herself. Near the end of the novel, Regan is poisoned out of jealousy by Goneril in order to win Edmund for herself. Here, the readers find out truly who the more evil sister is as Goneril kills herself instead of facing the consequences that she would have been punished for as Edgar rises to power.

Goneril and Regan are, in a sense, personifications of evil in King Lear—they have no conscience, only hunger for power. It is this lust for power that drives them to crush all opposition and make themselves mistresses of England. However, this lust ultimately unravels their binding. Their desire for more power and their sexual attraction and desire to Edmund eventually turns them against each other. It is as if Shakespeare suggests to the readers that the lust for power and villainy eventually turns on itself. 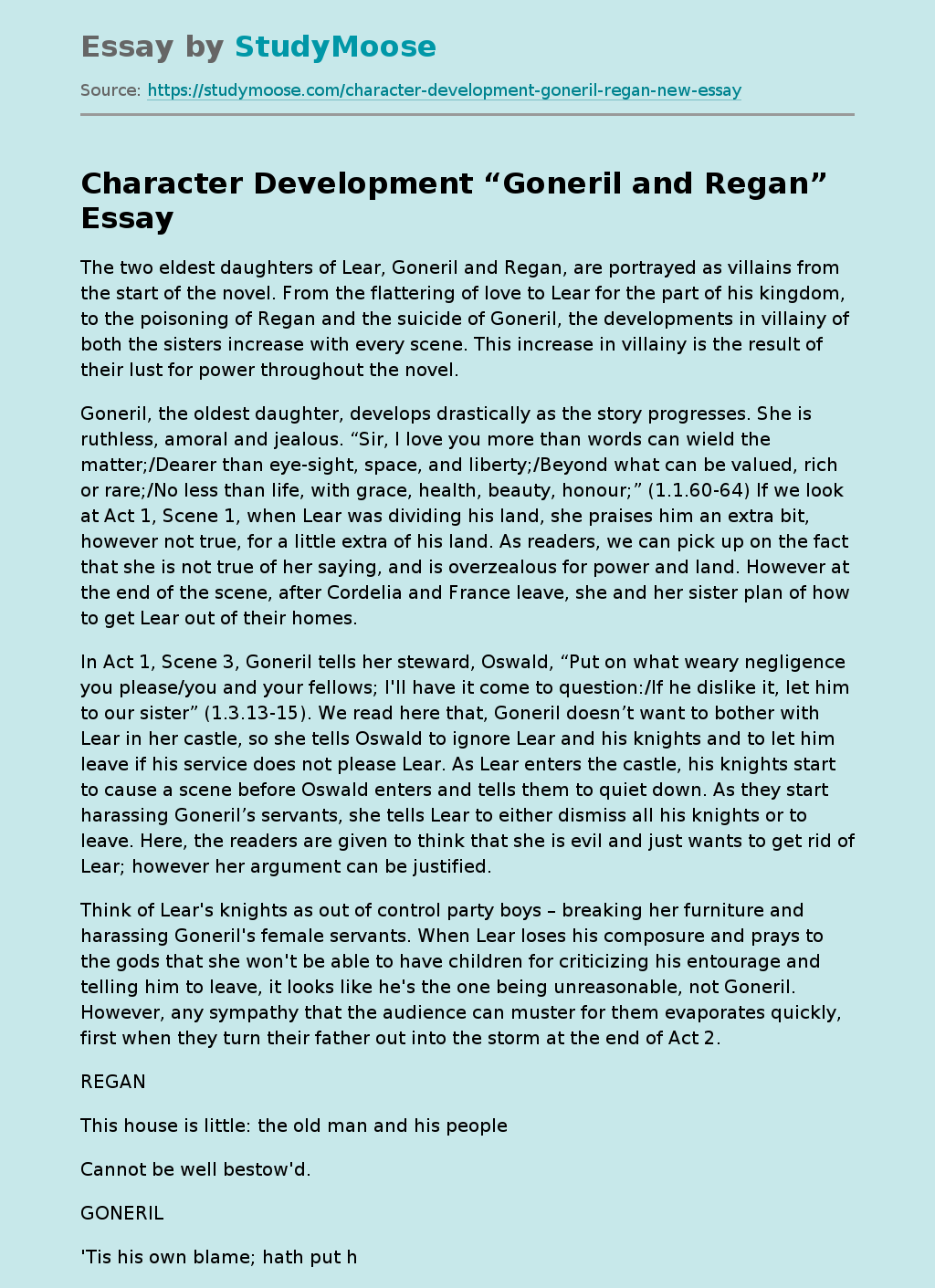