Ivan Denisovich Shukhov, the protagonist of the novel ‘One Day in the Life of Ivan Denisovich’ is a prisoner in the Soviet prison camp. He was caught by the Germans during the Second World War with perfidy when he tried to come back to Soviet lines. He spent earlier time of his imprisonment in Ust-Izhma camp and then in the “special” political camp. The special political camp was in the hands of harsh and abrasive authorities. Shukhov has spent eight years and he has enough experience of most of the tricks that can be used in the camp for the survival.

Don't use plagiarized sources. Get your custom essay on
“ Character development of Shukhov in “One Day in the Life of Ivan Denisovich”  ”
Get custom paper
NEW! smart matching with writer

He knows all the legerdemain of the harsh camp system, how to get extra food or other favours but he sticks to his moral principles of doing things so that there would be no harm for his self-respect. He actually adapts his own ways of survival in the camp.

Shukhov was a farmer when he was in his home, in his own free life he used to think about the farming, buying horses and haymaking etc.

It shows his agricultural experience and also shows his hard working life of being a farmer. As his life starts to move on, his carriers and thinking also changes with respect to his position. Then he became soldier of the Second World War but after that he could not go to his free living life of farmers and captured by Germans. Now, the life and thinking of Shukhov is in the hands of the authority of the special camp.

His life is totally changed, he does not think about his life and does not plan what he have to do for the next day. He is even no longer free to think. 1″During his years in prisons and camps he’d lost his habit of planning for the next day, for a year ahead, for supporting his family. The authorities did his thinking for him about every day.”

In the camp, Shukhov and his mates rely on each other and especially on the authorities who decide their life even for the basic needs of the life like food and warmth. Throughout the novel, the dependence on each other in the camp can be seen for the deprivation of food, warmth etc. Shukhov, in the beginning of the novel, depends on his mate, Fetiukov, who would save breakfast for him. Later on, Shukhov shows his dependence on Tsezar for the warmth and to stimulate his mind to have a cigarette from Tsezar which he was smoking. 2″At once he noticed that his team mate Tsezar was smoking, and smoking a cigarette, not a pipe. That meant he might be able to cadge a smoke. But he didn’t ask straight away, he stood quite close up to Tsezar and, half turning, looked past him.” Shukhov does not want to down his own dignity, so instead of asking him, he just stood there and waited for Tsezar to offer him a cigarette. It shows his self- possession attitude.

Shukhov is spending his almost eight years of his life in the camp and he is crossing through the dispossession of basic needs of the life like food, living place and warmth. He is sentencing enough time of his life to understand and discover new artifice in order to get enough food and warmth. He is good in hand work, building, making and hiding things. He has good methods of saving little things for the future use. In the beginning of the novel, there is an example of his small saved thing- spoon, which he made himself. It also shows the art of his hands, how nicely he can make useful things from the wire. He is using that spoon to eat his every meal which the damned authorities gave him. “Shukhov pulled his spoon out of his boot. His little treasure. It had been with him his whole time in the North, he’d cast it with his own hands out of aluminium wire and it was embossed with the words ‘Ust-Izhma 1944’. He is really serious about his decorum, but to live the life, sometimes he compromises with it and collects small things just to make his life little bit easy.

For example: he took a short length of steel out of Tsezar’s office. 3″As he……sight in the snow of a short length of steel- a bit of a hacksaw blade. He could conceive of no immediate use for it, but then you can never tell what you might need in the future. So he picked it up and slipped it into his knee-pocket. … Thrift is better than riches.” It shows his possession of collecting things and his concern for the future and his life. He always hides his trowel which he took from the machine room once and has been successful to hide it. He hid it because it helps him to work comfortably with good one tool. Spoon, hacksaw blade, trowel etc. these things seems to be small, physically but for Shukhov, these things are treasure for him which helps him to live his hard life in the harsh camp. He is also very concerned about not to waste the things. 4″Wasn’t it enough that Tiurin had told them not to bother about the mortar? …….. But Shukhov wasn’t made that way: eight years in a camp couldn’t change his nature. He worried about anything he could make use of, about every scrap of work he could do- nothing could be wasted without good reason.”

Shukhov is living there, where there is no importance of individuality, independence, humanity. Even then, he managed to maintain his individuality, self- respect, sense of honour, helping nature and other humanitarian values. In the opening of the novel, he showed us the way he used to have his meals. He always removed his hat from his head. Cold, less and cold food and other things do not stop him to remove his hat. It shows his concern about his values and human dignity. 5″Then he removed hat from his clean- shaven head- how- ever cold it might be, he could never bring himself to eat with his hat on.” He is accommodating to others. He is crossing through the deprivation of food but even then in the ending of the novel he gave biscuit to Alyosha without demanding anything in return. 6″Here you are, Alyosha,’said Shukhov, and handed him a biscuit.”

Moreover, he helps Tsezar, who is higher in hierarchy to hide his package during roll call. Firstly, he was just concerned about himself, but as the novel progresses he becomes helpful and offers his belongings to other without demanding anything in return. This helping behaviour of Shukhov makes him true human with good human values. Additionally, he respects the food which is another aspect of his values. It does matter he gets less amount of food with those things which somebody does not like to eat. 7″He ate everything- the gills, the tail and the eyes when they were still in the sockets….” In this way, he can fill his belly with meagre food and also respect the food. He is good at team work; he managed to work with Kilgas, effectively.

As Shukhov discovered many ways in the camp to live his life in a good way. Actually, he is also very competitive. Sometimes, he also plans; he helps Teszar in bringing his food in his office because he is higher in the hierarchy and quite wealthy, he receives parcels of food and Shukhov knows he would get something in return if he would help him in any way.

Shukhov is good example of hard worker who believes that work can give him warmth, dignity, pride, honour, skill and so on. Throughout the novel there is explanation of his work that he does in the camp. In almost the beginning of the novel he gives the idea how important work is for him. “Easy money weighs light in the hand and doesn’t give you the feeling you’ve earned it. There was truth in old saw: pay short money and get short value.” It shows the importance of work for Shukhov and he maintains it throughout the novel by refusing to scrounge and by slacking off when he is working. At almost the centre of the novel, he shows his ownership towards the work when everybody finished the work. 8″But Shukhov- and if ……. – ran to the back and looked about. Not bad. Then he ran and gave the wall a good look over, to the left, to the right. His eye was as accurate as a spirit level. Straight and even. His hands were young as ever. He dashed down the ramp.” This quote is from where when his team finished the work. It shows that he works with heart that is why, he came to see the wall and his hands were mentioned as young hands.

Shukhov is actually hard worker, true human with good values, supportive, devoted to his work, person with self-esteem, dignity and humanity. He manages his personal pride and decorum despite of the values- less authority where he lives. He is almost successful in overcoming from the prejudices in the evil created by the damned authorities. In reality, he is good model of the camp. He is good in managing his life even in the harsh conditions of the camp. Solzhenitsyn gave us exact Russian simple person who is caught by the Germans.

Character development of Shukhov in "One Day in the Life of Ivan Denisovich" . (2020, Jun 01). Retrieved from http://studymoose.com/character-development-shukhov-one-day-life-ivan-denisovich-new-essay 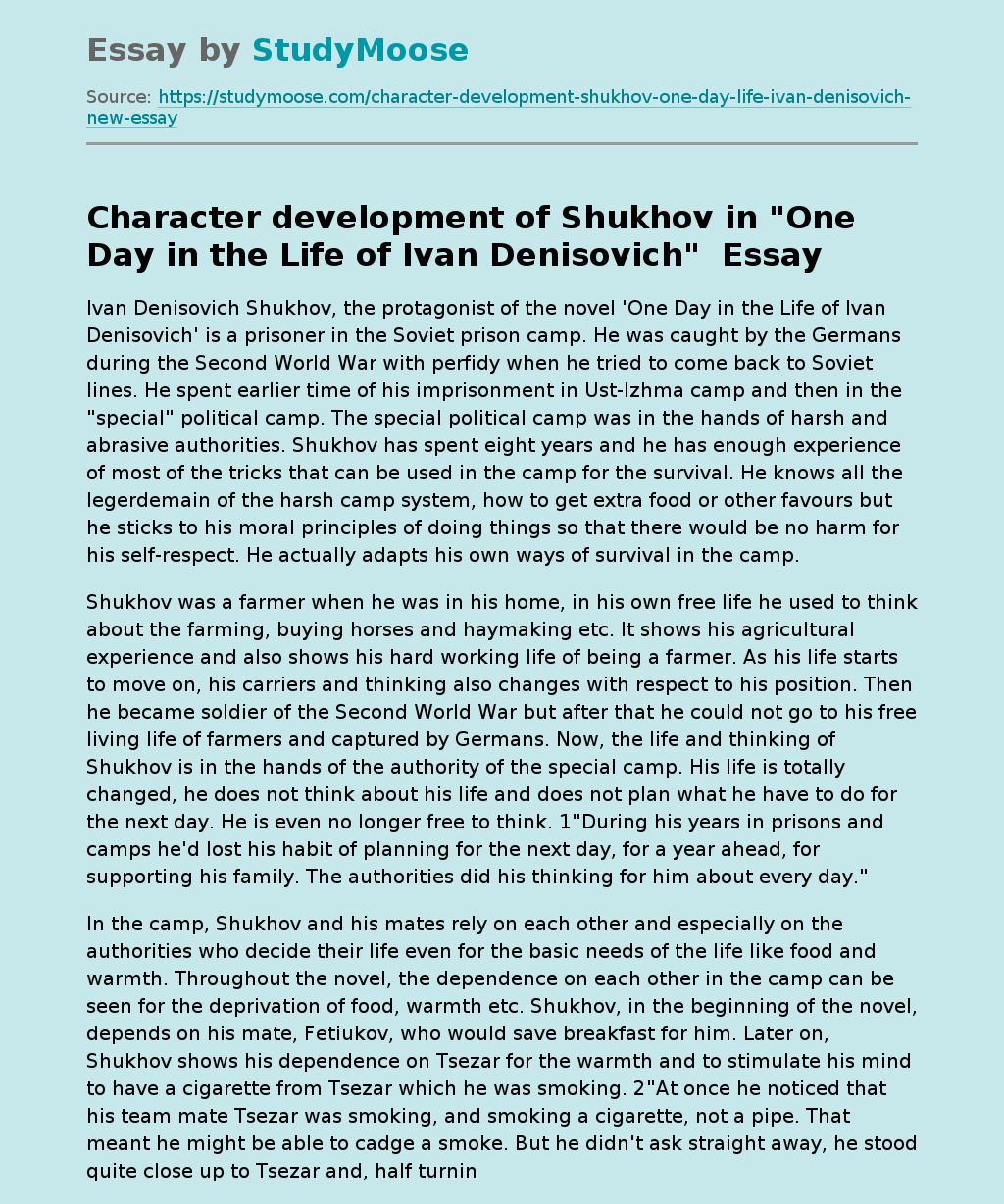