Character Development in the Kite Runner

The central character of the story as well as its narrator, Amir has a privileged upbringing. His father, Baba, is rich by Afghan standards, and as a result, Amir grows up accustomed to having what he wants. The only thing he feels deprived of is a deep emotional connection with Baba, which he blames on himself. He thinks Baba wishes Amir were more like him, and that Baba holds him responsible for killing his mother, who died during his birth. Amir, consequently, behaves jealously toward anyone receiving Baba’s affection.

Don't use plagiarized sources. Get your custom essay on
“ Character Development in the Kite Runner ”
Get custom paper
NEW! smart matching with writer

His relationship with Hassan only exacerbates this.

Though Hassan is Amir’s best friend, Amir feels that Hassan, a Hazara servant, is beneath him. When Hassan receives Baba’s attention, Amir tries to assert himself by passive-aggressively attacking Hassan. He mocks Hassan’s ignorance, for instance, or plays tricks on him. At the same time, Amir never learns to assert himself against anyone else because Hassan always defends him. All of these factors play into his cowardice in sacrificing Hassan, his only competition for Baba’s love, in order to get the blue kite, which he thinks will bring him Baba’s approval.

The change in Amir’s character we see in the novel centers on his growth from a selfish child to a selfless adult. After allowing Hassan to be raped, Amir is not any happier. On the contrary, his guilt is relentless, and he recognizes his selfishness cost him his happiness rather than increasing it. Once Amir has married and established a career, only two things prevent his complete happiness: his guilt and his inability to have a child with Soraya.

Sohrab, who acts as a substitute for Hassan to Amir, actually becomes a solution to both problems.

Amir describes Sohrab as looking like a sacrificial lamb during his confrontation with Assef, but it is actually himself that Amir courageously sacrifices. In doing this, as Hassan once did for him, Amir redeems himself, which is why he feels relief even as Assef beats him. Amir also comes to see Sohrab as a substitute for the child he and Soraya cannot have, and as a self-sacrificing father figure to Sohrab, Amir assumes the roles of Baba and Hassan. Plot Amir tells us about the unique relationship he has with Hassan, a Hazara boy who is the victim of discrimination, but ironically is the half-brother of Amir, a Pashtun.

Amir is overwhelmed with guilt when he allows Hassan to be beaten and raped on the day Amir wins the kite flying tournament. He lies to have Hassan accused of theft so he will leave their home and Amir can try to forget his guilt. Eventually, Amir and his father flee Afghanistan after the Russians invade and Amir takes his tragic memories to America to start a new life. Unfortunately, his debt to Hassan must be paid and he returns to his country to find Hassan’s orphaned son and rescue him.

There, he discovers that Sohrab has become the sexual plaything of Assef, the bully who had tormented both Amir and Hassan when they were young. Ultimately, Amir must defeat Assef in a raging physical battle, take the damaged Sohrab out of Afghanistan and try to help him repair his spirit. Conflict Amir is the protagonist, because it is his story – a story that details his childhood in Afghanistan and the terrible sin he commits against Hassan, a Hazara boy who also happens to be his half-brother. It also details how he eventually returns to his homeland to atone for that sin by finding Hassan’s son, Sohrab, and bringing him home.

The antagonist is, on the surface, the man named Assef, who is a bigoted childhood acquaintance of Amir and Hassan. He torments them both, but actually attacks and rapes Hassan. Later, when the Taliban gains control of Afghanistan, he becomes one of them so he can continue to torture others he finds inferior to himself. He also takes Sohrab as his sexual plaything and Amir must defeat Assef to bring Sohrab home and to the family he deserves. the other antagonist is Amir’s sin which he must expiate before he can find redemption. Setting.

* (Time) · 1975 through 2001 * (Place) · Kabul, Afghanistan; California, United States Mood The narrator speaks in the first person, primarily describing events that occurred months and years ago. The narrator describes these events subjectively, explaining only how he experienced them. At one point, another character briefly narrates a chapter from his own point of view. At times, the mood of The Kite Runner is tragic, filled with despair, and very sad; at other times, it is uplifting and hopeful. Finally, it is a triumphant commentary on the human spirit.

Development of Central Theme: The search for redemption; the love and tension between fathers and sons; the intersection of political events and private lives; the persistence of the past. The Search for Redemption Amir’s quest to redeem himself makes up the heart of the novel. Early on, Amir strives to redeem himself in Baba’s eyes, primarily because his mother died giving birth to him, and he feels responsible. To redeem himself to Baba, Amir thinks he must win the kite-tournament and bring Baba the losing kite, both of which are inciting incidents that set the rest of the novel in motion.

The more substantial part of Amir’s search for redemption, however, stems from his guilt regarding Hassan. That guilt drives the climactic events of the story, including Amir’s journey to Kabul to find Sohrab and his confrontation with Assef. The moral standard Amir must meet to earn his redemption is set early in the book, when Baba says that a boy who doesn’t stand up for himself becomes a man who can’t stand up to anything. As a boy, Amir fails to stand up for himself. As an adult, he can only redeem himself by proving he has the courage to stand up for what is right.

Character Development in the Kite Runner. (2017, Jan 03). Retrieved from http://studymoose.com/character-development-in-the-kite-runner-essay 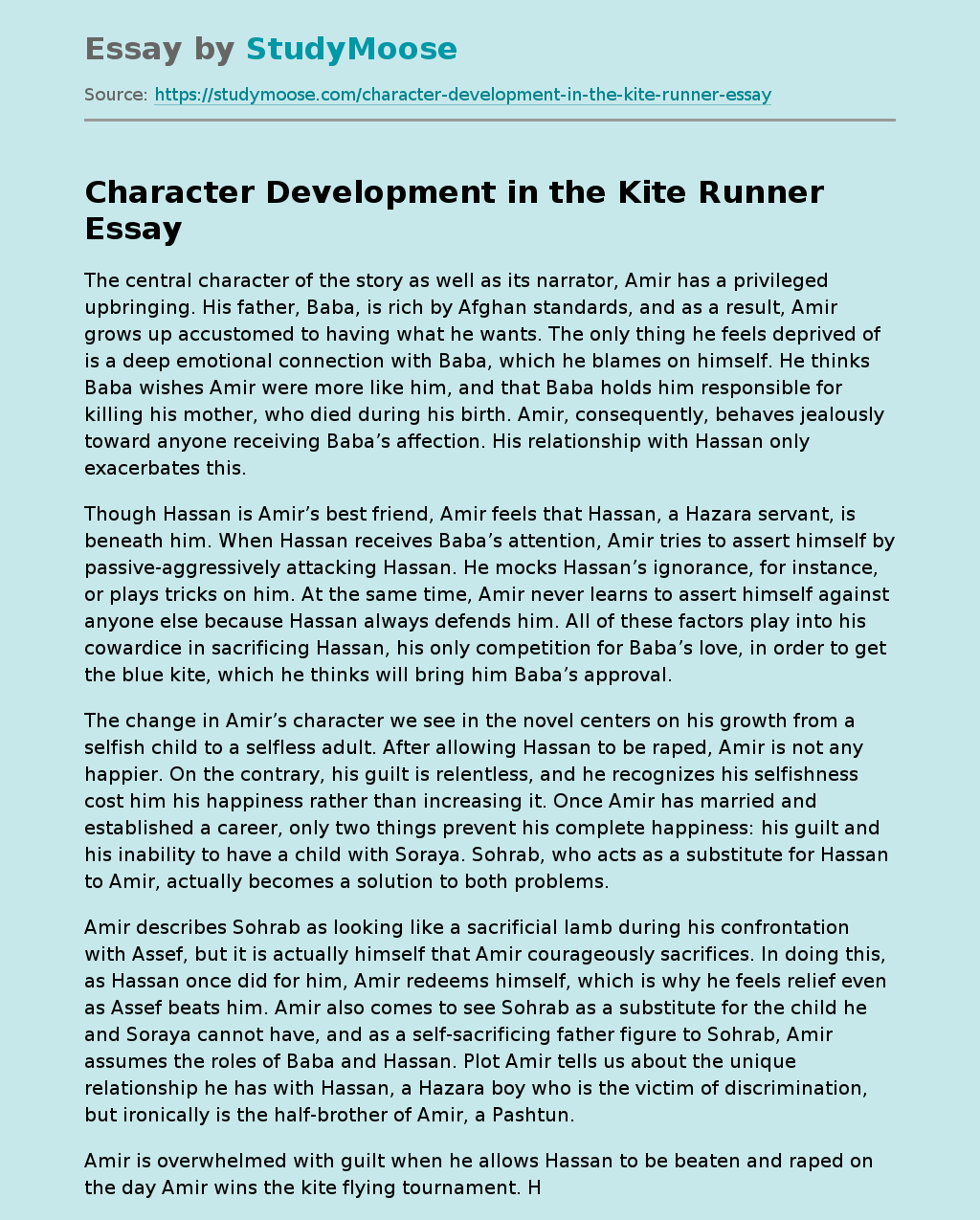