The past, inevitable will always remain with you throughout your life and all your endeavours. The past is what defines us as individuals and guides us to new and better places in life. The Kite Runner by Khaled Hosseini , a story built upon the events of the past and living with guilt which eventually leads to redemption, highly reflects the statement “the past is always there”. The poems ‘Invictus’ by William Ernest-Henley and ‘If’ by Rudpud Kipling also reflect ‘the past always being there’.

Don't use plagiarized sources. Get your custom essay on
“ Kite Runner Novel by Khaled Hosseini ”
Get custom paper
NEW! smart matching with writer

The Kite Runner, written by Khaled Hosseini, is a novel set in the midst of Taliban country, Kabul Afghanistan, in the mid 1970s up until the early 2000s. The novel highlights the differences within society, capturing the lives of two boys belonging to different religious adherence and defining the effects of the Taliban regarding these religions within society at the time. Amir, the protagonist is a Pashtun and we experience the story through his eyes and Hassan a Hazara, a slave to Amir, play the main characters in the novel.

The Kite Runner displays many different themes throughout the novel including the search for redemption and resilience, both having a significant effect on the novel and the characters within the novel.

The search for redemption makes up the heart of the novel with the main character, Amir venturing on a quest to clear his mind of all the inept things he has done and relieving the guilt that he has gained as a child. The main cause of Amir’s search for redemption occurs when Assef, the novels antagonist, rapes Hassan.

The rape becomes a significant motif in the novel and a guilt stricken moment for Amir, who watches it happen “I had one last chance to make a decision. I could step into that alley and stand up for Hassan.

Or I could run. In the end, I ran” This is a defining moment for Amir, we realise how much of a coward he is and how he would rather not hurt himself than to save his loyal friend. The beginning of the novel opens with a flashback that foreshadows the upcoming events within the novel and intriguing the reader “That was a long time ago, but it’s wrong what they say about the past, I’ve learned, about how you can bury it. Because the past claws its way out.“ this symbolises the rape and signifies how much of an impact that scene had on Amir because he talks about not being able to get over ‘that day’ for 26 years.

Amir redemption lies in Hassan’s son, Sohrab, who needs to be saved from the Taliban who ends up being Assef. When Amir accepts that he has to do this for Hassan he is motivated to make things right and hopeful that it will clear him of his guilt “There is a way to be good again. A way to clear the cycle. With a little boy. An orphan. Hassan’s son. Somewhere in Kabul.” This foreshadows the journey Amir is going to embark on to make things right for Hassan and himself. The ending is significant as it displays a cyclical structure with the use of kites at both the beginning and end. But also portrays the complete redemption of Amir towards Hassan, through Sohrab when he is able to say “For you, a thousand times over.” This is symbolic for Hassan because it is an expression of loyalty and when Amir is able to express it to Hassan’s son, he accepts the past and has made things right again. Resilience is an important quality to have as an individual allowing us to be able to gain strength after an impacting event in life. Resilience is a strong and powerful theme displayed in the kite runner with both Hassan and Amir later in the novel, portraying qualities of resilience.

Hassan undergoes a significantly traumatic experience as a child but manages to regain strength again and ends up building his life and starting a family and to the audience is an admirable character due to his pure strength and courage. Hassan is resilient towards Amir’s hurtful comments and disloyalty as a child, when Amir accuses Hassan of stealing, it hurts Hassan but yet he admits to it because of the loyalty towards Amir “Hassan’s reply was a single word, delivered in a thin, raspy voice: Yes”. Hassan is seen as a defending character that sticks up for Amir, a symbol of Hassan’s strength and resilience is the slingshot, Hassan’s weapon that he uses against Assef. The slingshot is significant as it symbolises strength and resilience towards Assef and represents two generations, Hassan and Sohrab. William Ernest-Henley also echoes resilience of the human spirit in the poem Invictus.

This poem was written in the Victorian era in 1875 and represents overcoming suffering a chronic illness and the amputation of his leg. Whilst Henley was reflecting in hospital he decided to write this poem to represent his pain and hardships which was later named ‘invictus’ which ironically means unconquerable. Similarly to the kite runner, invictus displays the theme of resilience towards Henley and overcoming his illness and Hassan overcoming the rape. Henley displays strong commitment in the poem and a complete devotion to overcoming his pain “My head is bloody, but unbowed.” This displays the courage Henley had to keep persevering and fighting for what is right, which, unlike Hassan who kept his feelings and emotions to himself, was never able to address Amir for being such a coward.

Amir is resilient as a child somewhat, mainly towards his father’s comments about how he isn’t the child he wanted because he is weak and doesn’t defend himself “A boy who won’t stand up for himself becomes a man who can’t stand up to anything”. Amir as a child, all he wants is his fathers respect towards him and not Hassan. This becomes conflicting in Amir’s life because he believes Hassan is the reason he isn’t close with Baba. But when Amir return to Kabul 26 years later and is sitting across for the main reason everything in his childhood was ruined, Assef, Amir is resilient as he was able to come back and face his fears. This is echoed when Assef is beating up Amir and he, ironically, is finally at peace for everything that has happened “What was so funny was that, for the first time since the winter of 1975, I felt at peace.”

This is ironic as laughter is not an expression of pain, but for Amir it felt right and the pain was symbolising his peace. The poem “If” By Rudyard Kipling, is a didactic poem, written in 1896, that portrays fatherly advice to a son on how to become the best man, inspired by an English Nobleman who led the Jameson Raid. He displayed courage and willingness to take responsibility and Kipling admired these qualities. Kipling portrays resilience and perseverance in this poem as an important quality in a man “And stoop and build’em up with worn out tools” This is informal language, which replicates someone’s speech, making the poem more personal and represents resilience and to never give up.

This poem, contrasts the kite runner, as Amir and Babas relationship was never really close because Baba believed that Amir didn’t possess the qualities of a real man, or the same qualities as himself, but this poem represents fatherly advice to his son to be the best he can be in life. The past is a never forgotten memory of what has endured in our lives and the kite runner is a novel strongly based on the idea of the past and how it affects the future. Similarly the poems Invictus and If both capture the concept of the past and how we can better our lives form learning because of our past. 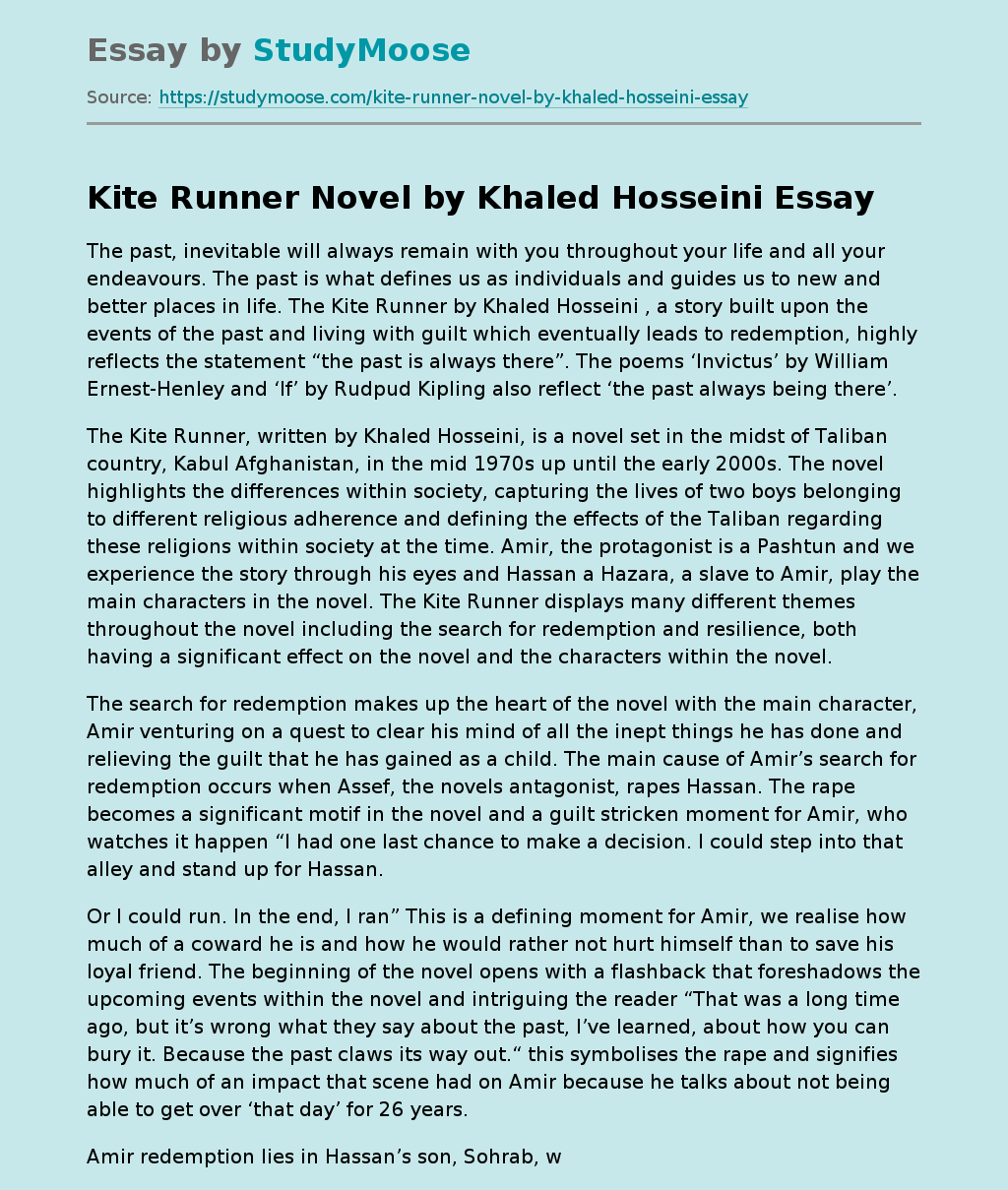