The Importance of Loyalty and Betrayal in The Kite Runner, a Novel by Khaled Hosseini

The themes of Loyalty and Betrayal in The Kite Runner

The Kite Runner was the first novel written by Khaled Hosseini, and was published in 2003. The story is told through the eyes of the protagonist Amir, and the events of his life in Afghanistan, fleeing from Afghanistan to America because of the Soviet-Afghan war, and finally returning to Afghanistan to rescue Sohrab, his half brother’s son. There are various themes that influence the development of the story, including love, loyalty, betrayal, redemption, race and many more.

Don't use plagiarized sources. Get your custom essay on
“ The Importance of Loyalty and Betrayal in The Kite Runner, a Novel by Khaled Hosseini ”
Get custom paper
NEW! smart matching with writer

These themes are present throughout the novel and helps build up to the suspenseful turning points and conflicts that make The Kite Runner exciting to read. All of the characters display these themes, especially Amir and his childhood friend/half brother Hassan. Although there are many themes in The Kite Runner, two of the most important themes in The Kite Runner are loyalty and betrayal as loyalty is what connects the characters together and form relationships, while betrayal breaks relationships and causes conflicts.

Loyalty is a strong feeling of support to someone or something. The most noticeable display of loyalty is Hassan towards Amir. Early on in the novel, Hassan displays loyalty to Amir and his father Baba, and stays loyal to them until he dies. Because of Hassan’s loyalty, he can be described as selfless and caring. In chapter 5, when Amir and Hassan were picked on by neighbourhood bullies Assef, Kamal and Wali, Hassan defends Amir and himself by scaring Assef with a slingshot.

When Hassan runs the kite for Amir in chapter 6, he says “For you, a thousand times over” to Amir. Hassan is expressing his loyalty to Amir by telling Amir he would run the kite a thousand times for Amir. Another instance of Hassan’s loyalty to Amir is in chapter 7, when Hassan got raped because he did not let Assef take the kite. Hassan did not want to break his loyalty with Amir by giving up the kite. Even after the rape, Hassan stays loyal with Amir, and continues serving him. In chapter 9, Amir betrays Hassan by framing him, but even though Hassan knew he was framed he continues his loyalty with Amir and does not tell Baba he was framed. Even though Amir betrays Hassan, Amir starts becoming loyal to Hassan later in the novel. After Hassan dies and Amir finds out Hassan’s son Sohrab is in trouble, Amir flies back to Afghanistan to rescue Sohrab. Hassan and Amir are not the only characters who display loyalty. Baba displays his loyalty to Hassan by hiring a doctor to fix his harelip, even though Hassan was a Hazara and a servant. Loyalty is important as it bonds the characters together and leads Amir to rescue Sohrab for Hassan.

The theme of betrayal is important in The Kite Runner as it leads to major turning points and conflicts in the story. Both Baba and Amir betrayed the people who were closest to them. Amir never treated Hassan as if he was a true friend, and betrays Hassan multiple times in the novel by not willing to help Hassan and pushing him away. In chapter 7, Amir watches Hassan get raped but does not go to rescue Hassan, despite being Amir’s best friend and always helping Amir when he needed help. After the rape, Amir continues to betray Hassan. In chapter 9, Amir frames Hassan by hiding a watch and money under his bed, then accusing him for stealing it. This act of betrayal by Amir leads to one of the major turning points of the novel, with Ali and Hassan’s departure from Baba’s house. The feeling of guilt resulting from Amir betraying Hassan haunted Amir for many years, until he redeemed himself. In addition to Amir’s betrayal to Hassan, Baba betrays Amir by lying and not telling Amir that Hassan was his half-brother. After Amir heard the news, it changed how Amir viewed Baba forever. Baba was known in the novel as a well-respected man with good morals and no tolerance to stealing or lying. Baba breaks his own morals by lying to Amir and stealing Amir’s rights to know Hassan was Amir’s half brother and not just a servant. As multiple incidences has shown, betrayal led to destruction of friendships and conflicts in the novel.

Loyalty and betrayal are important central themes in the story. These themes changed the outcome of many of the events in the novel. Loyalty and betrayal are considered opposites, as loyalty is associated with friendship, trust and support, but betrayal is associated with conflicts and dishonesty. Amir is the character who betrays others often and Hassan is the character who is loyal to others, making Amir and Hassan somewhat opposites. This is one of the reasons why Hassan and Amir never fully got along with each other and had so many conflicts. The guilt caused by Amir betraying Hassan in addition to Amir’s loyalty to Hassan caused him to risk his life to save Sohrab. The central plot, Amir trying redeeming himself by saving Sohrab is a result of Amir realising he made a mistake by betraying Hassan after Hassan’s loyalty to Amir.

The Importance of Loyalty and Betrayal in The Kite Runner, a Novel by Khaled Hosseini. (2019, Aug 19). Retrieved from http://studymoose.com/the-importance-of-loyalty-and-betrayal-in-the-kite-runner-a-novel-by-khaled-hosseini-essay 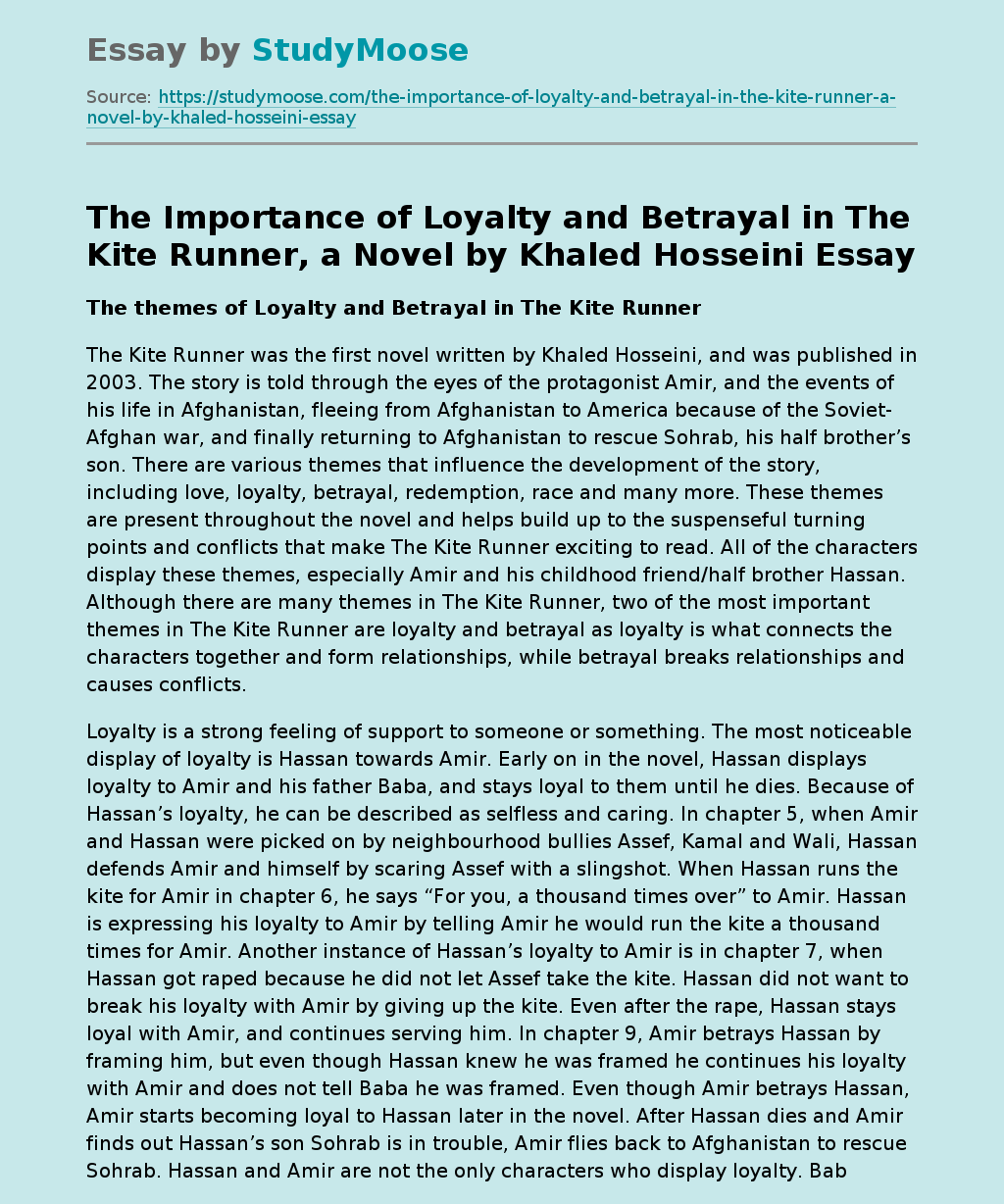