Loyalty is an attitude of devotion, faithfulness and affection. In the novel The kite runner Loyalty is a prominent theme throughout. There are signs of loyalty between a few characters but the main ones concerning Hassan and Amir . Hassan comes from a rough social background, lacks education and is the main victim of disloyalty by Amir however he was the character who portrayed loyalty the most. Amir is constantly putting Hassans loyalty to the test.

He asks him if he would chew dirt and Hassan answers him in saying that if he was asked to then yes he would but he challenges Amirs loyalty at the same time in saying “ but I wonder, would you ever ask me to do such a thing amir agha” .

Don't use plagiarized sources. Get your custom essay on
“ The Kite Runner: Loyalty Theme ”
Get custom paper
NEW! smart matching with writer

Hassan shows loyalty to Amir when he admits to stealing his watch and his money. He knew all along that Amir wanted to get rid of him and Ali however being the loyal servant and friend he was he admits to a crime which he did not commit for Amirs sake .

he does this To ensure Baba does not see Amir as a liar.

The main incident which proves the magnitude of Hassans loyalty towards Amir was when Amir watched Hassan get raped but did nothing to stop it. And although Hassan endured the most traumatic experience of his life he remains loyal to Amir and disregards the fact that he witnessed the entire scenario. He ignores Amirs sinful actions and instead asks if HE had done something wrong.

Throughout his life, Amir is haunted by the disloyalty with which he has always treated Hassan, especially since Hassan had always been unquestionably loyal to him.

Little things like hand washed and ironed clothes neatly placed on the chair and the wood already burning at breakfast time reminds Amir of Hassans continuous loyalty and causes him extreme guilt Hassan even dies a loyal man by resisting the Taliban when they came to take possession of Babas house. Amir finally gets the opportunity to change his life for the better and for a change demonstrate his faithfulness towards Hassan after his death.

By Amir making a dangerous trip back to Afghanistan to rescue and raise Hassan’s son -Sohrab from the Taliban is a prime example of returning his loyalty to Hassan . Amir flies kites with sorab and tells him how hassan was the best kite flyer. He develops a close relationship with sorab and treats him as if he were his own son. He truly wants the best for Sorab and he is finally given the opportunity to be as loving and loyal as Hassan once was. 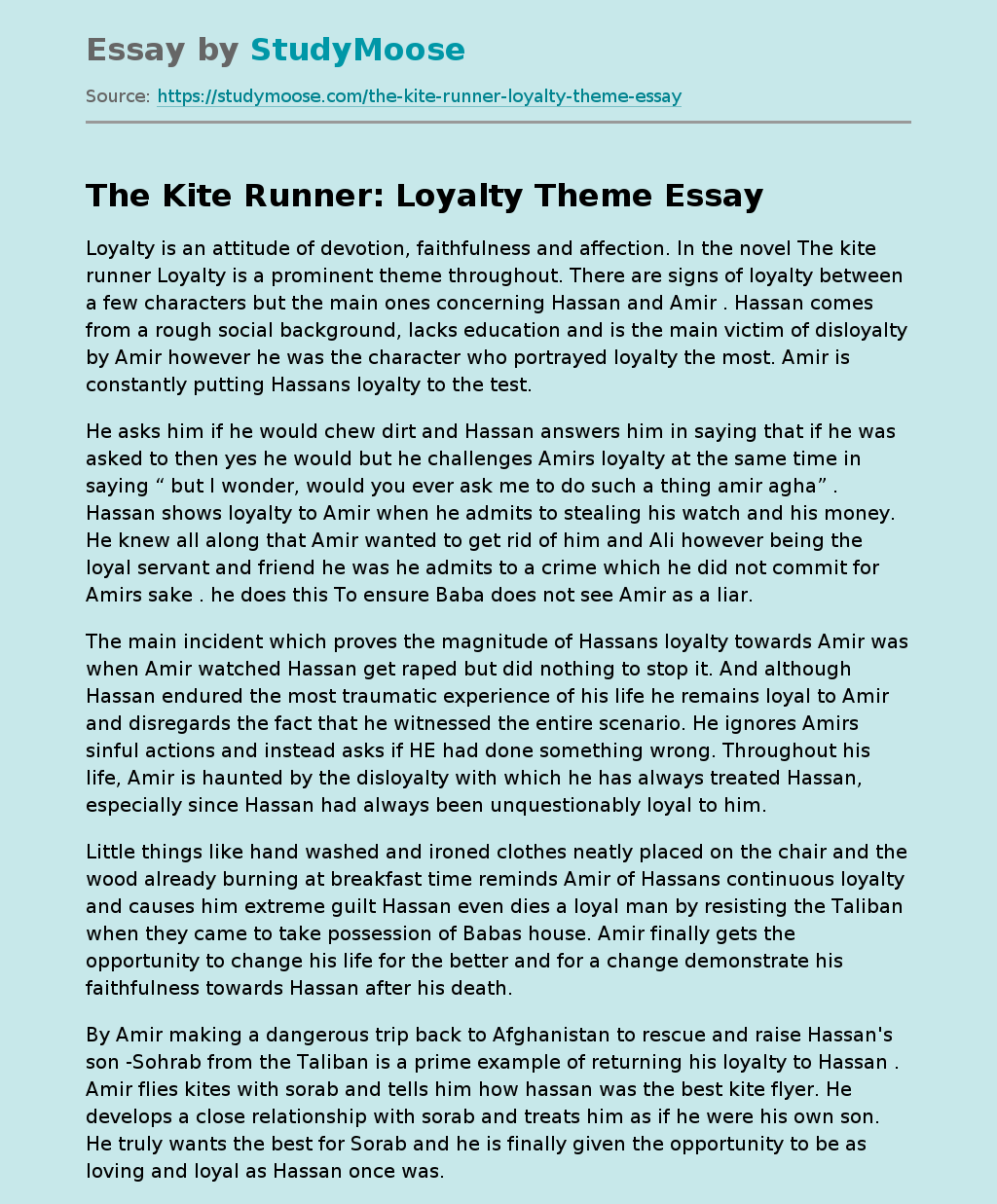