Character of Amir in Novel "The Kite Runner"

In Khaled Hosseini’s book The Kite Runner, we learn about a boy named Amir and get to know him as he grows up into an adult. Amir faces lots of conflict in his life and is a very complex character. The author leads us on a journey of Amir’s life from when he was very young up until he turns into an adult. Khaled Hosseini uses many different techniques in this book to help explain what Amir has been through.

Don't use plagiarized sources. Get your custom essay on
“ Character of Amir in Novel “The Kite Runner” ”
Get custom paper
NEW! smart matching with writer

Still, 20 years later this novel is still relevant because of this powerful story.

We quickly learn that Amir always tries to do what is right and believe in all the right things, but doesn’t always follow through with making the right choice. Amir also gets jealous very easily. Amir was born into an above average family. His mom died while giving birth to Amir and so his father, Baba is the one who raised him. Amir adores his father and really tries to gain his love and affection in the book.

Amir has a brother named Hassan who he envies because it’s almost like Baba prefers Hassan as a son rather than Amir. It is very clear that his jealousy is aimed towards Hassan because Amir has always wanted to show Baba that he is worthy of his love and affection but Hassan seems to always interfere which is what makes Amir so upset. He often makes fun of Hassan for his own entertainment and calls him names like “imbecile”.

He does this because it is Amir’s way of lashing out and putting all the upset feelings has has all towards Hassan which shows how Amircan be very jealous. Amir has a very very good moral compass and that’s easy to see from the beginning of the book. Sometimes he lets his anger get the best of him and lashes out but then becomes filled with guilt. For example, when Amir feels guilty about when Assef raped Hassan he goes to the pomegranate tree to talk to him. Amir started picking up pomegranates and throwing them at Hassan then asks him to throw then back at him so they were “even”. Hassan didn’t throw them back, instead he just walked away. This displays of on the main themes in the novel- guilt and redemption. Amirs search for redemption doesn’t stop here, his search goes throughout the whole novel.

In the very beginning of the book The Kite Runner, it is very apparent that Amir can tell there is something wrong with his relationship with Baba. Amir wants to fix his relationship with Baba more than anything. At the horse race, Baba gets mad at Amir for feeling sad about one of the players that dies from being stepped on by the horse. Amir overhears Baba telling his friend about how he is confused about how Amir is related to him because they are so different. This is where Amir starts searching for a way to make their relationship stronger. Another conflict Amir faces in the book is his conflict with Hassan. Amir isn’t there for Hassan when Assef rapes him even though Amir could’ve easily helped because he witnessed it. This creates lots of guilt and sadness Amir feels all throughout the book and never gets 100% over what happened.

Amir is constantly searching for redemption in the book The Kite Runner. Amir tries to prove to Baba that he is a good person and a good son because he feels guilty because he believes that he is the one who killed his mother. Amir really works hard to win the kite race to redeem himself in Baba’s eyes. Baba says “a boy that doesn’t stand up for himself becomes a man who can’t stand up for anything”. Because of what Baba says Amir believes that since he didn’t do anything about Hassan getting raped when he was a kid he feels that the only way he can redeem himself is when he is an adult which is why he went to Assef when he was older to confront him about the rape. Another theme in the book is how often the past comes up as Amir. The best example of this is Amir and Sohrab. Sohrab has had such a messy past which influences the person who he turns out to be. The slightest bit of affection Amir shows to Sohrab makes Sohrab really uncomfortable because of Sohrab abusive past. Amirs past constantly comes up in his life present-day life because of the first theme- his search for redemption. Because of the past events in Amir’s life from when he was younger still makes him guilty as he gets older. He especially feels this way because he doesn’t only feel responsible for his mother death, but Hassan’s death too. On page one of The Kite Runner Amir explains how the past can never be left behind.

Overall, The Kite Runner is an example of issues with relationships and learning how to make them right again once they become ruined. We see the evolution of characters all throughout the book. The use of the literary techniques the author uses helps emphasize each event Amir goes through which helps us better understand the journey Amir went through all throughout his life.

Character of Amir in Novel "The Kite Runner". (2021, Mar 03). Retrieved from http://studymoose.com/character-of-amir-in-novel-the-kite-runner-essay 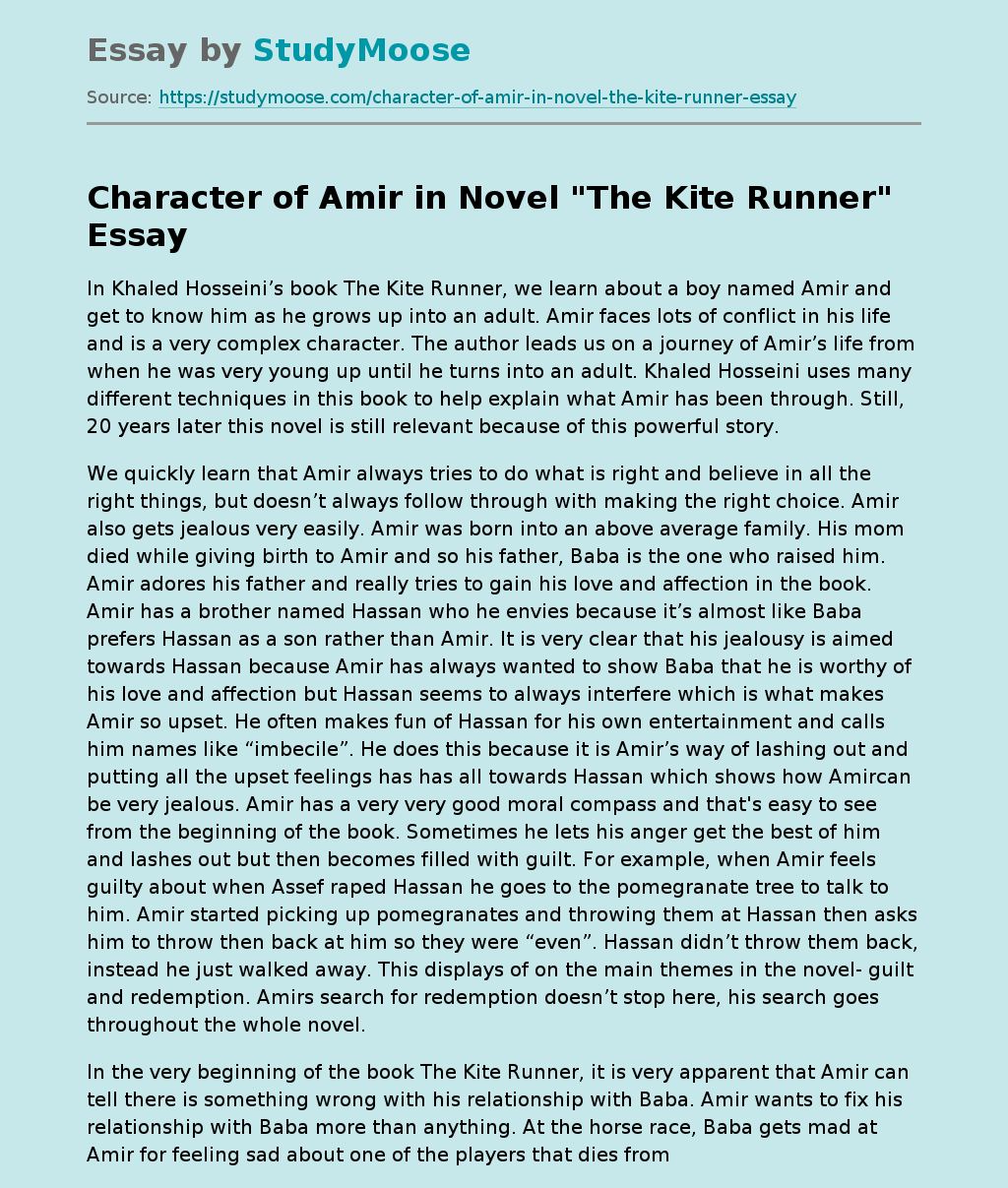