It is fair to say Amir redeemed himself by demonstrating courage in the end of Khaled Hosseini’s controversial novel, The Kite Runner. Not all individuals possess courage and some develop this virtue at a later time in life. Courage is defined as the ability to do something that frightens one. That is precisely what Amir had done when he received a phone call from his old friend, Rahim Khan. He repented for the terrible things he had committed and decided it was time for him to make things right and “be good again.

He risked his new life and traveled to his treacherous homeland to make right of something he had done years ago. He vowed to fix his mistakes and by this act showed courage and redemption. Amir had betrayed his only friend Hassan in one of the most cruel and darkest ways. He witnessed something unspeakable and did not aid his friend nor did he make anyone aware of the situation.

Yet Amir was a young boy at the time and young children can be ignorant in situations such as these. He had known what he saw was wrong and felt, at the least to say, heart wrenchingly guilty. He was painfully aware of his cowardness.

He takes it because he has to fix the mistake he made with Hassan and realizes saving his now orphaned son, Sohrab, is the way to do it. He demonstrates newfound courage by traveling back to Afghanistan, a place he never wanted to see again. Although his homeland is now dangerous and swamped with evil Taliban, he is determined to rescue his nephew.

Initially Amir travels to a run-down Afghan orphanage in hopes of finding Sohrab and releasing him to a couple who will take care of him. Upon arriving there he finds out his nephew has been taken by Taliban and he then goes to save him from his menacing, childhood bully, Assef. This truly courageous act shows how far Amir was willing to go for redemption. He was Kidder 2 beaten mercilessly and brutally by Assef to get Sohrab. In a way his redemption was also his retribution. As he was getting injured by Assef, Amir felt he was finally paying for all his sins and mistakes.

“My body was broken-just how badly I wouldn’t find out until later-but I felt healed. Healed at last, I laughed (The Kite Runner 253). ” Battling his demon and saving Sohrab was his most courageous act by far. Amir always considered Hassan his brother symbolically, having being “fed from the same breast. ” When he found out Hassan was truly his brother by blood, he was in disbelief but accepted it. That is why he decided it was best he take Sohrab to live with him in America. In his heart he knew this courageous act would be his final step to redemption.

He would never be able to fix what happened with Hassan but saving his son would save anymore tragedy from happening. It was difficult for Sohrab to transition from life of hardship in Afghanistan to life in America, the land of dreams. He was mute for two years and was judged harshly by General Tahiry. Amir stood up to the General and told him “You will never again refer to him as ‘Hazara boy’ in my presence. He has a name and it’s Sohrab (The Kite Runner 315). ” This was courageous and honorable of him as he has always been intimidated by the General.

The Kite Runner is a spectacular, well-written novel that conveys how an individual can develop the virtue of courage even much later in life. What the character of Amir had done was terribly wrong, but he fully atoned for his mistakes. Realizing the error of his ways, he went above and beyond to make things right. It took courage to travel to one’s forgotten hometown, the place where he went through hardship. It took a great deal of courage to bring his nephew to safety from Taliban. Amir suffered enough and showed enough courage to finally be redeemed from his sins. 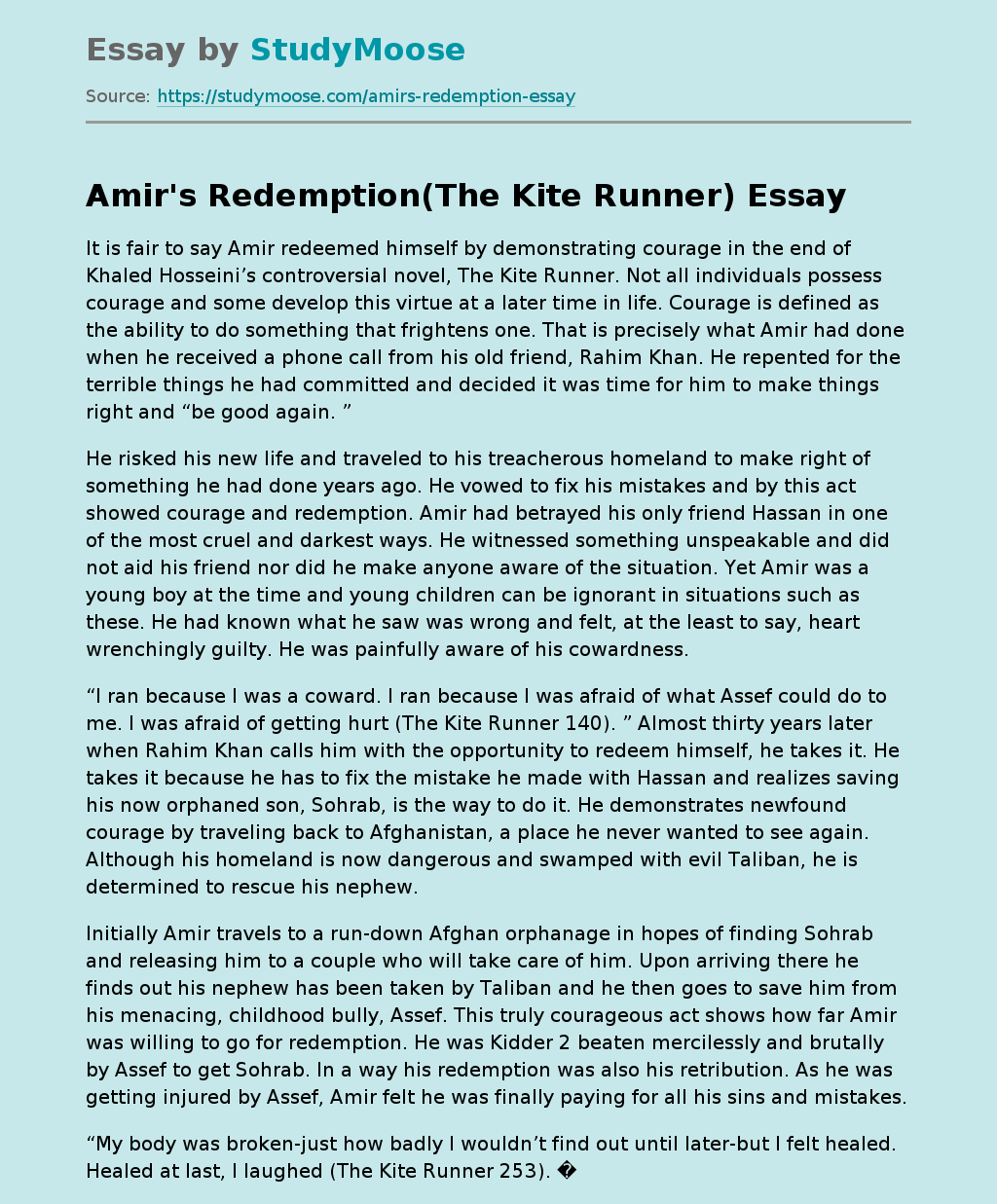