Examination of Bravery in the Kite Runner

During a lifetime, most people are put in a situation where they can either help someone who needs them or they can be willfully blind and not do the right thing for convenience’s sake. In the novel The Kite Runner by Khaled Hosseini, bravery is a quality that is shown by many of the main characters. These characters use bravery to guard the things in their lives that are important to them even if their physical wellbeing is harmed, they still stand up for the things they believe they should protect.

Don't use plagiarized sources. Get your custom essay on
“ Examination of Bravery in the Kite Runner ”
Get custom paper
NEW! smart matching with writer

This paper examines how throughout the novel, all the characters are at some point faced with this difficult decision – whether to ignore the situation or to do the right thing – with differing results. Early on in the novel we learn that the main character, Amir, has a best friend Hassan who will do anything for him if he asks for or needs the help. For example, in the beginning of the story when Hassan defends Amir from the bullies of their town who are much older and by doing this puts himself in danger of being hurt.

Hassan says to the boys: You are right, Agha.

But perhaps you didn’t notice that I’m the one holding the slingshot. If you make a move, they’ll have to change your nickname from Assef ‘the Ear Eater’ to ‘One-Eyed Assef,’ because I have this rock pointed at your left eye. (Hosseini 111). Hassan protects Amir at any risk to his own harm.

Later, in another situation Hassan promises Amir that he will go retrieve the tournament winning kite from the hills where it had blown, but while Hassan does this the town bully Assef catches him and wants the kite. Hassan tells the bully that “Amir agha won the tournament and I ran this kite for him. I ran it fairly.

This is his kite” (Hosseini 77). This important part of the novel changes Amir’s life forever; he sees that his friend will do anything for him including standing up to boy who in the end will rape and torture him because Hassan believes Amir should have the kite. While Hassan stand up to the bully for what he thinks is right, Amir watches through the cracks and is too frightened to intervene. Here the author juxtaposes the two boys’ reaction to the situation showing the strength of Hassan and the cowardly decision of Amir to stay quiet and hide – a decision that will haunt him throughout the novel.

Unlike Amir, Hassan has proven again and again that he will stand up for what he believes is right, despite the bodily harm it may cause. Continuing on the acts of selflessness, Amir’s father Baba has always believed he must do and teach his son the right things in life. The two need to flee the country because Russians have invaded and their position puts them at risk. As they escape from Afghanistan, a Russian soldier wants to have thirty minutes with a married Afghan women who is in the truck in order to let the group pass into Pakistan.

The wife’s husband begs Baba to do something about it and he knows he has to because it is the right thing to do despite the risk. He tells the soldier, “I’ll take a thousand of his bullets before I let this indecency take place” (Hosseini 122). After he says this he knows there is a chance he will get killed: he is very lucky that he does survive. His act, even though risky, saved the women from a very undeserving situation. Had he not said anything to the soldier the woman would surely have been raped and Baba would have to live with the knowledge that he did not make an attempt to stop it.

For Baba, this is not the moral compass he wishes to pass along to his son Amir. Lastly, Amir, the main character of the book, is not known for always being brave. During his childhood he is known for the opposite – he is a coward who cannot stand up for others in their time of need. This happens when he watches Hassan get raped while trying to recover their kite. This situation defines Amir’s life; he knows he needs to one day make up for the sin or he will always be living with a huge regret for the rest of his life.

When he finds out Hassan died protecting his family’s home in Afghanistan and his son was sent to an orphanage, he knows this is his chance for redemption. Assef, the town bully who years before had raped Hassan while Amir watched, now has Hassan’s son Sohrab. Amir, remembering Hassan’s goodness and values, finally decides to stand up to Assef. Amir reflects, “I remember how envious I’d been of Hassan’s bravery. Assef had backed down, promised that in the end he’d get us both. He’d kept that promise with Hassan. Now it was my turn” (Hosseini 300). Amir risked his life because of Hassan’s past moral stand in order to protect Sohrab.

By saving Hassan’s son, Amir finally feels free for the mistakes of his childhood: his act of bravery had redeemed himself. In each of these circumstances of bravery the characters are self-sacrificing and put others above themselves to uphold values of importance to them; Hassan is brave and always sacrifices himself to defend the promises he makes to his friend, Baba stands up for someone who’s fate wouldn’t affect him because he feels that regardless of the punishment it is right thing to do, and Amir in the end sacrifices himself like his best friend had done for him to save Hassan’s son.

Even though it takes Amir while to redeem the mistakes made as a child he learns from the morals of his best friend and father to do the right thing in the end. For Amir this ends the guilt he had suffered through his whole life. The author shows that no matter the childhood mistakes we can always redeem our actions in life.

Examination of Bravery in the Kite Runner. (2020, Jun 02). Retrieved from https://studymoose.com/examination-bravery-kite-runner-new-essay 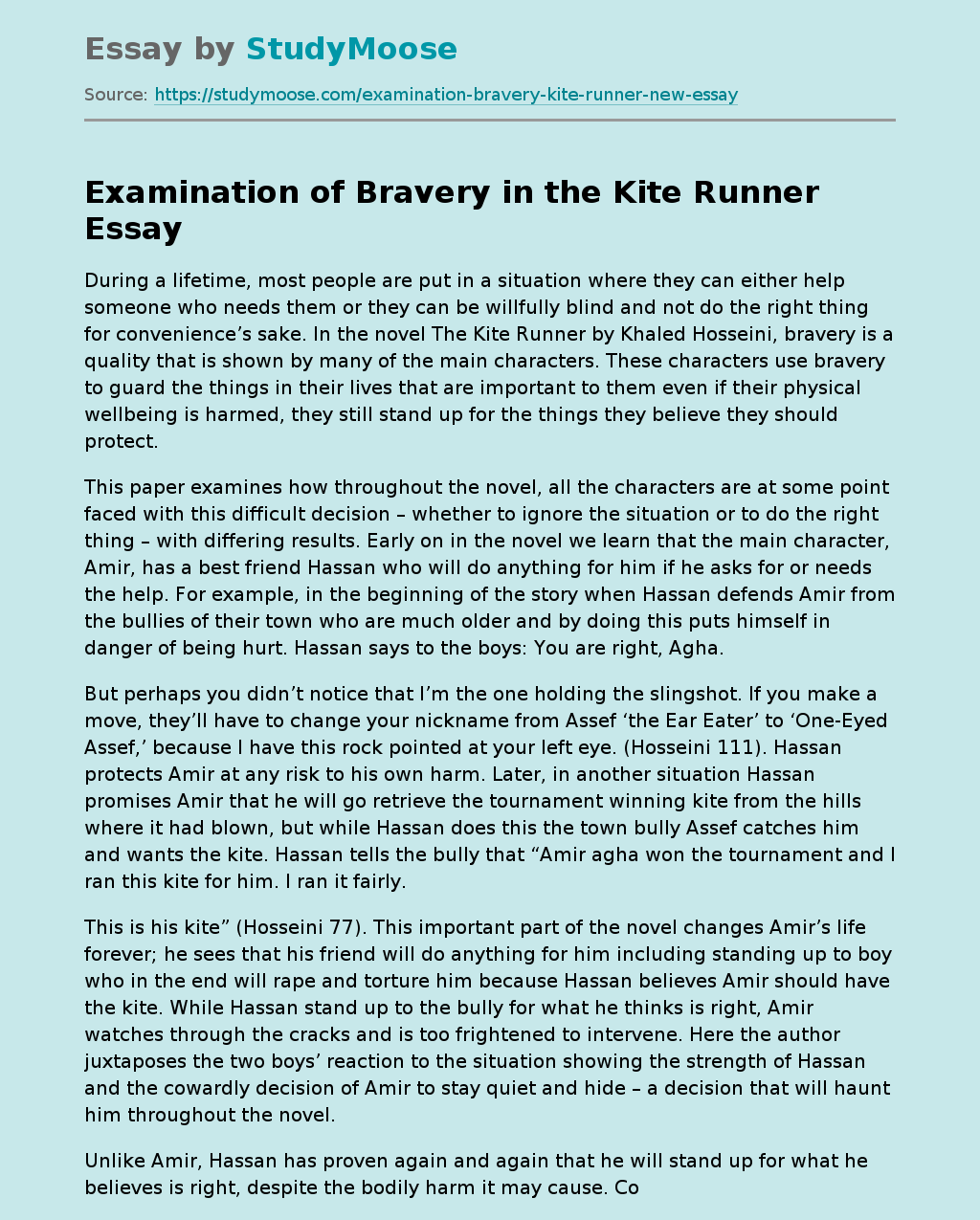