Redemption in The Kite Runner

It is only natural for humans to make mistakes, just like Amir in the novel The Kite Runner, but it is how the mistakes are resolved that will dictate ones fate. The main character of The Kite Runner, Amir, knows a thing or two about making mistakes. What he struggles with throughout the novel is finding redemption for those mistakes. Throughout all stages of Amir’s life, he is striving for redemption. Whether Amir is saying the wrong thing or hiding from a hurtful truth, he always finds new things he will have to redeem himself for.

Don't use plagiarized sources. Get your custom essay on
“ Redemption in The Kite Runner ”
Get custom paper
NEW! smart matching with writer

That is why redemption is a huge underlining theme in The Kite Runner. When Amir is a child, he feels his father blames him for his mother’s death and cannot love him. He does everything he can think of to try and make up for the mistakes he made in the past. Since Amir feels his father does not love him, he thinks of ways to make things right with him.

Amir sees Baba as a perfect higher presence that he could never amount to.

When the kite running competition comes around he takes this opportunity to prove to his father that he can be more of an “ideal” son to Baba, ultimately getting redemption for everything his father has not approved of. Amir sees Baba as a perfect father figure because everyone looks up to him. Amir could never live up to Baba’s expectations of him and that is where the theme of redemption comes to play between these two characters.

Although Amir impresses his father by winning the kite running competition, he ends the day by hurting his best friend in a terrible way and one day he will have to find a way to make up for it. Amir and Hassan are two inseparable children, but their relationship is unusual because Hassan is Amir’s servant. Amir is never very nice to Hassan, but Hassan would never turn his back on Amir. This is evident when he says, “For you a thousand times over”. Amir makes a huge mistake one day by hurting Hassan and it takes a very long time for him to find a way to redeem himself. The kit running competition was supposed to be the best day of Amir’s life.

He would win, and earn his dad’s unconditional love once and for all, but things are not always as they seem. Although Amir did win the competition, something went very wrong. Hassan will always have Amir’s back, until the day he dies he would do anything for him. When Amir cut the last Kite down from the sky, Hassan decided to run it. Assef and his two friends didn’t exactly want Hassan to bring the kite back to Amir. Amir is a very evil young boy and since Hassan would do anything for Amir, he refuses to hand the kite over to Assef. Hassan’s final act of bravery results in his rape and Amir’s next big mistake. Amir watches Assef and his friends rape Hassan, but he does nothing to help his friend. Amir goes many years knowing this information but never tells anyone, but what goes around comes around. When everything finally catches up with Amir, he is a grown man. Things in Amir’s life have finally settled down, but now the past is brought back up; he must go find redemption once more. Amir survived his childhood, made a good life for himself and marries a beautiful Afghan woman named Soraya. One thing Amir is deprived of in his life is the ability to have children.

Amir’s inability to have children could possibly be looked at as coincidental or symbolic to him making amends for his past mistakes and misgivings. Amir receives a phone call from his father’s old friend Rahim Khan. Although Rahim is dying, he asks Amir to come visit him in Afghanistan. Amir soon realizes that the main reason Rahim Khan asked him to visit was not to see him before he died, but because Rahim wants to help Amir succeed in reaching his final redemption. Rahim Khan has known about the kite running competition for Amir’s entire life, and he has a way for him to try and set things right. Hassan, who is dead now, has a son, but he is an orphan boy. The Taliban has taken over Afghanistan and they killed Hassan and his wife in cold blood. Sohrab, who is Hassan’s son, has been taken by the Taliban as payment for the orphanage. Rahim Khan puts Amir up to the challenge of going to find Sohrab and giving him a proper home.

He states, “I have a way to make things right again”. In order for Amir to redeem his past with Hassan, he must go and find Sohrab, who is the ultimate symbol of redemption in Amir’s life. Finding Sohrab was Amir’s greatest accomplishment, it was the ultimate redemption for all the evil and unjust things that have haunted his past. Amir fails to stand up for himself and others, as a child. As an adult, he redeems his uncourageous past by setting it right with the help of some very close family members. Amir goes through many stages in his life, but he always seems to be redeeming himself for something. Sometimes life seems to work out in the end, and the search for redemption may not always be easy, as witnessed in Amir’s case. However, a strong will and determination can help guide the road to redemption and possible forgiveness.

Redemption in The Kite Runner. (2016, Mar 30). Retrieved from https://studymoose.com/redemption-in-the-kite-runner-essay 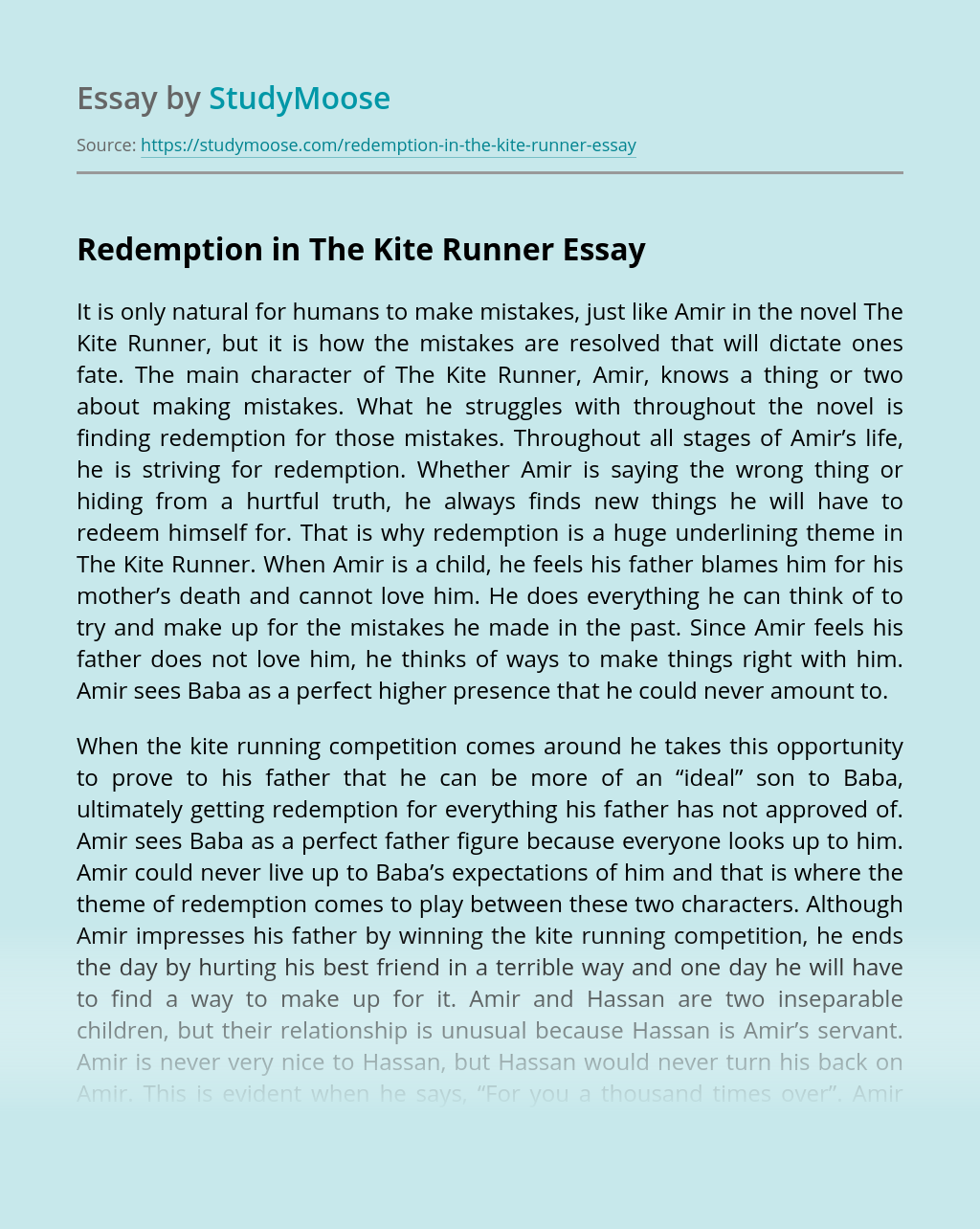