Thesis Statement- The protagonist, Amir, must atone for the sins of his past to enable the creation of new relationships in the future.

First Body Paragraph
Q1
“I never thought of Hassan and me as friends… history isn’t easy to overcome. Neither is religion. In the end, I was a Pashtun and he was a Hazara, I was Sunni and he was Shi’a, and nothing was ever going to change that. Nothing” (Hosseini 27) Despite the fact that Amir has spent his entire life in Hassan’s company he does not consider Hassan to be his friend.

This is because of social status. Hassan religion is seen to be below Amir and this is why they will never be able to be friends. Hassan does not understand this and takes every opportunity to please Amir, to make him happy. The two boys grew up together, they learned to crawl together, and they later taught each other how to ride a bicycle.

But history and religion override all of the mitigation factors in this relationship, and Amir has decided that he doesn’t value this relationship to be anything more than a master and his servant.

Q2
“I had one last chance to make a decision. One final opportunity to decide who I was going to be. I could step into that alley, stand up for Hassan- the way he’d stood up for me all those time in the past- and accept whatever would happen to me. Or I could run.

In the end, I ran” (pg 82) Amir was always trying to please Baba, to make him proud, to seek his approval. Amir was finally able to do this when he won the Kite Flying tournament. Baba had never been so proud.

The only task left was for Hassan to run and find the winning kite. After a period of time Amir went to look for Hassan. He found him in the alley with Assed, and other bullies. Hassan had the winning kite, but there was a price to pay for this kite. Nothing is free in this world. Amir witnessed an act of unwavering loyalty from Hassan, as Hassan was being raped in order to keep the kite. Amir had the opportunity to step in and protect his companion, but instead chose to close his eyes. This was the price he had to pay to receive Baba’s affection, and this haunts Amir for his entire lifetime.

Q3
“Mostly, I remember this: His brass knuckle flashing in the afternoon light; how cold they felt with the first few blows and how quickly they warmed with my blood… for the first time since the winter of 1975, I felt at peace. I laughed because I saw that, in some hidden nook in a corner of my mind, I’d ever been looking forward to this” (302) Amir has found Hassan’s son with Assef, leader of the Taliban and rapist. Assef issues a challenge for the boy and Amir accepts, this is Amir’s way of forgiving himself for all of his past sins.

He is finally being punished for never stepping in and trying to protect Hassan because of his cowardice. With each physical injury that Assef inflicts Amir is forgiven more and more. This incident will make it possible for Amir to atone himself of his sins and create a future relationship with Sohrab, Hassans son and his part nephew.

Second Body Paragraph
Q1
“Maybe he would call me Amir Jan like Rahim Khan did. And maybe, just maybe, I would finally be pardoned for killing my mother” (60) Baba, Amir’s father, loved his wife. When she died during child birth it broke his heart. This created initial discord between Amir and Baba. One that was never able to abolish itself. Amir had different interests than Baba; this made it difficult for Amir to please Baba, which made it impossible for Amir to forgive himself for killing his mother at birth.

Q2
“That was when I understood the depth of the pain I had caused, the blackness of the grief I had brought onto everyone, that not even Ali’s paralyzed face could mask his sorrow” (113) Ali grew up with Baba from childhood, and although Ali was their servant they had a long history together. Amir unable to express his feelings to anyone about watching Hassan be raped due to his loyalty has depleted his ability to function. The only way for Amir to rid himself of this guilty is to eliminate its source despite the pain and anguish it may bring to others. When Ali and Hassan left, Babe cried. This created yet another emotional barrier between Baba and Amir.

Q3
“It’s the happiest day of my life, Amir, he said, smiling tiredly… he watched me joking with Shariff, watched Soraya and me lacing our fingers together, watched me push back a loose curl of her hair. I could see his internal smile.” (175) Amir and Baba left Afghanistan, they went to America. Together they went, leaving behind their part and moving forward together. Both creating new relationships, Baba at the flee market and at his new job, and Amir with Soraya. Leaving their homeland allowed them to forgive each other for the previous mistakes in their own relationship and move forward together in a fresh start.

Third Body Paragraph
Q1
“The car jerked forward and I felt a tiny hand on my forehead… Sohrab was sobbing” (306) The relationship between Amir and Sohrab is just beginning to develop. They have no past behind them and this will allow them to create their relationship from scratch, no former life holding them back. Amir has redeemed himself and can now create a meaningful future with Sohrab. The memory of Sohrab’s father, Hassan, is not forgotten, but is transformed into a new opportunity to learn from the past and make the right choice. Q2

“A kinship exists between people who’ve fed from the same breast. Now, as the boy’s pain soaked through my shirt, I saw that a kinship had been taken root between us too. What had happened in that room with Assed had irrevocably bound us” (336) When Amir found Sohrab with the Taliban men he was determined to finally do the right thing, he would leave that building with the child. He was finally receiving the retribution that he deserved for all the times he didn’t stand up to protect Hassan that he just stood and watched. Amir needed to feel punished for all of his buried sins, then he would be redeemed. Amir was able to rescue Sohrab, however ultimately he was rescuing himself. Now a relationship between the two of them is starting to kindle.

Q3
“It was only a smile, nothing more… But I’ll take it. With open arms. Because when spring comes, it melts the snow one flake at a time, and maybe I just witnessed the first flake melting” (391) Amir was finally able to transport Sohrab into America. Amir is learning the roles of a friend, as well as a parent. This relationship between Amir and Sohrab has not been a smooth development, as many relationships are not. There have been roadblocks and situations which have been difficult to remedy, but eventually as time continues to roll on, they will have developed a meaningful relationship. One that was built on trust, friendship and love 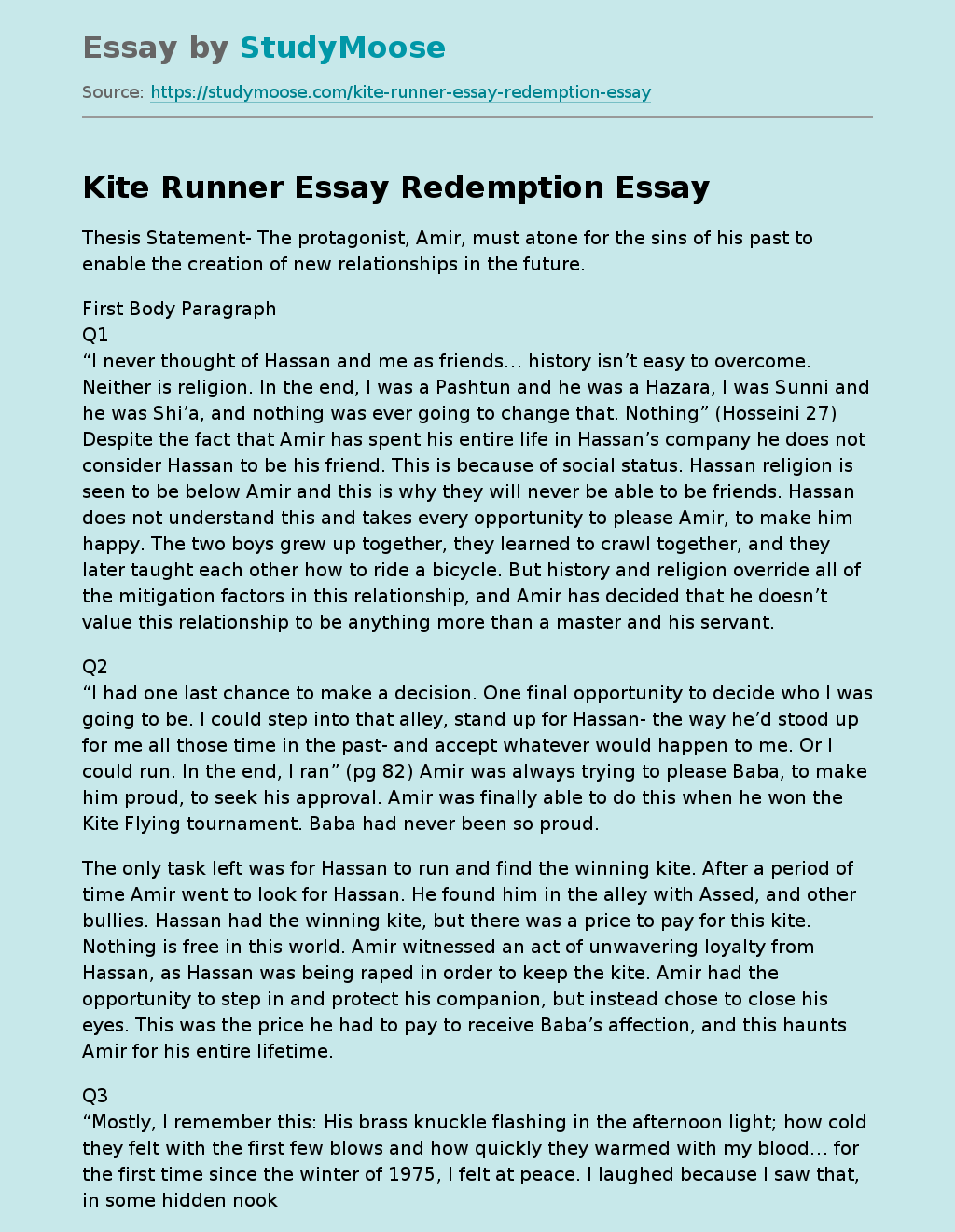