Anna Avalon, the adventurous and admirable main character of “The Leap’ written by Louise Erdich has many traits that prove her to be a very admirable woman. Her daughter is very grateful to have her as a mother. Throughout this short story, it is quite easy to see that Anna Avalon is talented, careful and brave. Considered to be “The surviving half of a blindfold trapeze act” (Pg. 190) Anna Avalon is very talented. She had previously been a performer. “Anna of the Flying Avalon’s” She had been involved in many performances and was definitely a crowd favourite, Anna had performed many “Double somersaults and heart-stopping catches” (Pg.

90) However, one day there had been a tragic accident. While seven months pregnant, lightning struck a pole resulting in three deaths.

“ Lightning struck the main pole and sizzles down the guy wires, filling the air with a blue radiance” (Pg. 192) Anna was the only one who survived this tragic accident, this showing her talent.

Along with talented, Anna Avalon is very careful. She is an elderly lady living in New Hampshire, with sightless eyes. Although blind, “she has never upset an object or as much as brushed a magazine onto the floor. She has never lost her balance or bumped into a closet door left carelessly open. The “catlike precision of her movements’ (Pg. 190) is probably due to her early training. When caught in a house fire, Anna was willing to risk her own life in order to save her daughter.

This shows that she’s a brave and courageous woman and would do anything for her child.

Several years ago, Anna Avalon’s house caught on fire, when her daughter was just seven years old. The staircase to her upstairs room had been cut off by flames so everyone was outside thinking there was no rescue. “Outside, my mother stood below my dark window and saw clearly that there was no rescue. (Pg. 195) However, Anna Avalon did everything in her power to assure her daughter would be safe.

“Standing there, beside Father, who was preparing to rush back around to the front of the house, my mother asked him to unzip her dress. When he wouldn’t be bothered, she made him understand. He couldn’t make his hands work, so she finally tore it off and stood there in her pearls and stockings. She directed one of the men to lean the broken half of the extension ladder up against the trunk of the tree. ” (Pg. 195) Anna had well thought out a way to save her seven year old.

She leaped through the icy-air and “was hanging by the backs of her heels from the new gutter”. (Pg. 195) She then tapped on the window to let her daughter know she came to rescue her. Although she was only in her underclothing, she had bigger things to worry about, such as saving her daughter. She successfully saved her daughter, showing her true heroism and bravery. Throughout “The leap’ it’s clear that Anna is very admirable. She has done many things in her life to help others and we see that she is a wonderful person. From her actions, Anna Avalon is talented, careful and brave. 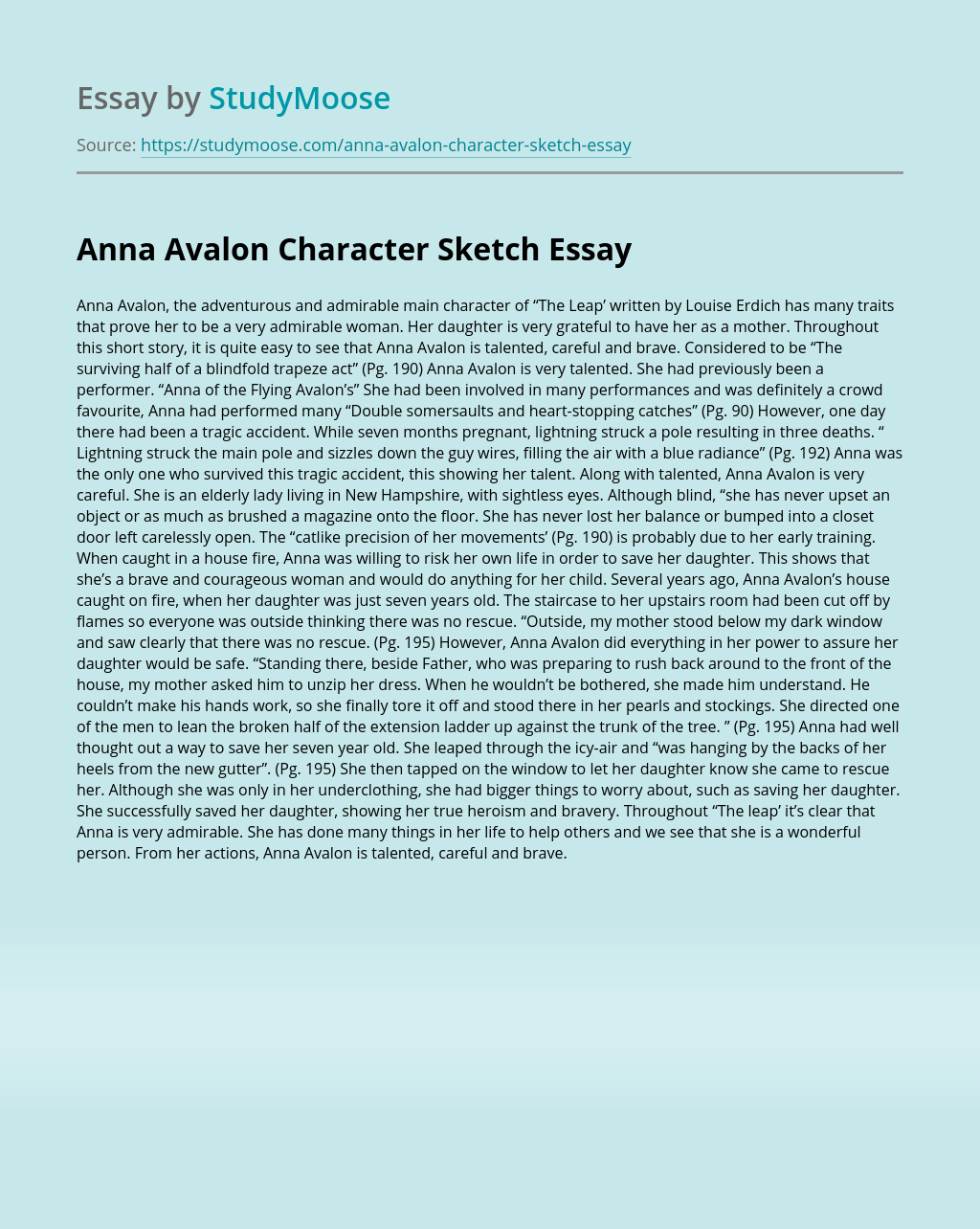