“The Red Convertible” by Louise Erdrich is a short story about two Native American brothers, Lyman and Henry, and their growing bond as brothers. Symbolism is used rather heavily in this story. One of the main symbols of the story, as noted in the title, is the red convertible. The red convertible symbolizes the relationship status of the two brothers, and the struggles they face as Henry is drafted into the Vietnam War as well as when he returns home.

In the beginning of the story, Lyman and Henry go in together and purchase a red Oldsmobile convertible.

Don't use plagiarized sources. Get your custom essay on
“ The Red Convertible Short Story Analysis ”
Get custom paper
NEW! smart matching with writer

In the beginning the condition of the convertible was fantastic. Although the story never clearly stated whether the car was brand new or not, the brothers drove the car on a summer road trip all over the country including Alaska and back. “We’d made most of the trip, that summer, without putting up the car hood at all. We got home just in time.

” (Erdrich 327) Not only does this passage show the condition of the car being very well, but the relationship between Lyman and Henry being strong as well. During the whole road trip the brothers were very content with each other. They stopped and enjoyed their freedom on the road at every chance they got, and loved every minute of the trip together as brothers.

The next section of the story describes the time that Henry was away at war. Henry was drafted into the Vietnam War and was held as a prisoner of war for 3 years.

During this time Lyman wrote several letters to Henry overseas, but Lyman only received 2 letters from him. In the meantime the car was described to be “…up on blocks in the yard or half taken apart…” (Erdrich 327). This indicates that their brotherly bond was on hold or at a standstill at the moment. The fact that the car was described as “half taken apart” (Erdrich 327) indicates that the relationship between the two may need some work.

When Henry returned home from the war, Lyman had the red convertible fixed up to tip-top shape as if to say that Lyman had thought when Henry got home their bond would be just the way they had left it. Lyman soon realized he was wrong. The war had torn Henry to the point that he would stare lifelessly at a television screen for hours on end. He had not said more than a few words to Lyman for some time. Angered, Lyman purposefully damages the red convertible to get the attention of his brother. The damaging of the car represents the anger felt by Lyman that the relationship with his brother had been destroyed by the war. By destroying the car, Lyman is metaphorically changing the condition of the red convertible to match that of their brotherly bond. “Now I don’t even know if I can get it to start again, let alone get it anywhere near its old condition.” (Erdrich 328) Henry states about the car, symbolizing his feelings towards their relationship.

In the final portion of the story, Henry finally fixes the car back into decent condition after Lyman damages it. At this point in the story, the audience is thinking that the relationship is mended as the brothers take the newly restored red convertible for a leisure ride to the river. As Lyman and Henry load the trunk with a full cooler, Lyman gets the same feeling. Henry is joking and laughing, and it seems as if the bond between the brothers is restored until they reach the river.

At the river they get into a scuffle over who will keep the car. The fight is soon brushed off as the brothers laugh and drink their troubles away by the river. “Got to cool me off!” (Erdrich 331) Henry shouts as he plunges into the river at the end of the story. It is not clear if Henry intentionally jumps into the river to end his life, but he soon meets his demise. Lyman goes in to attempt to rescue his brother with no luck. He then drives the red convertible into the river and watches as the car slowly dies as well. 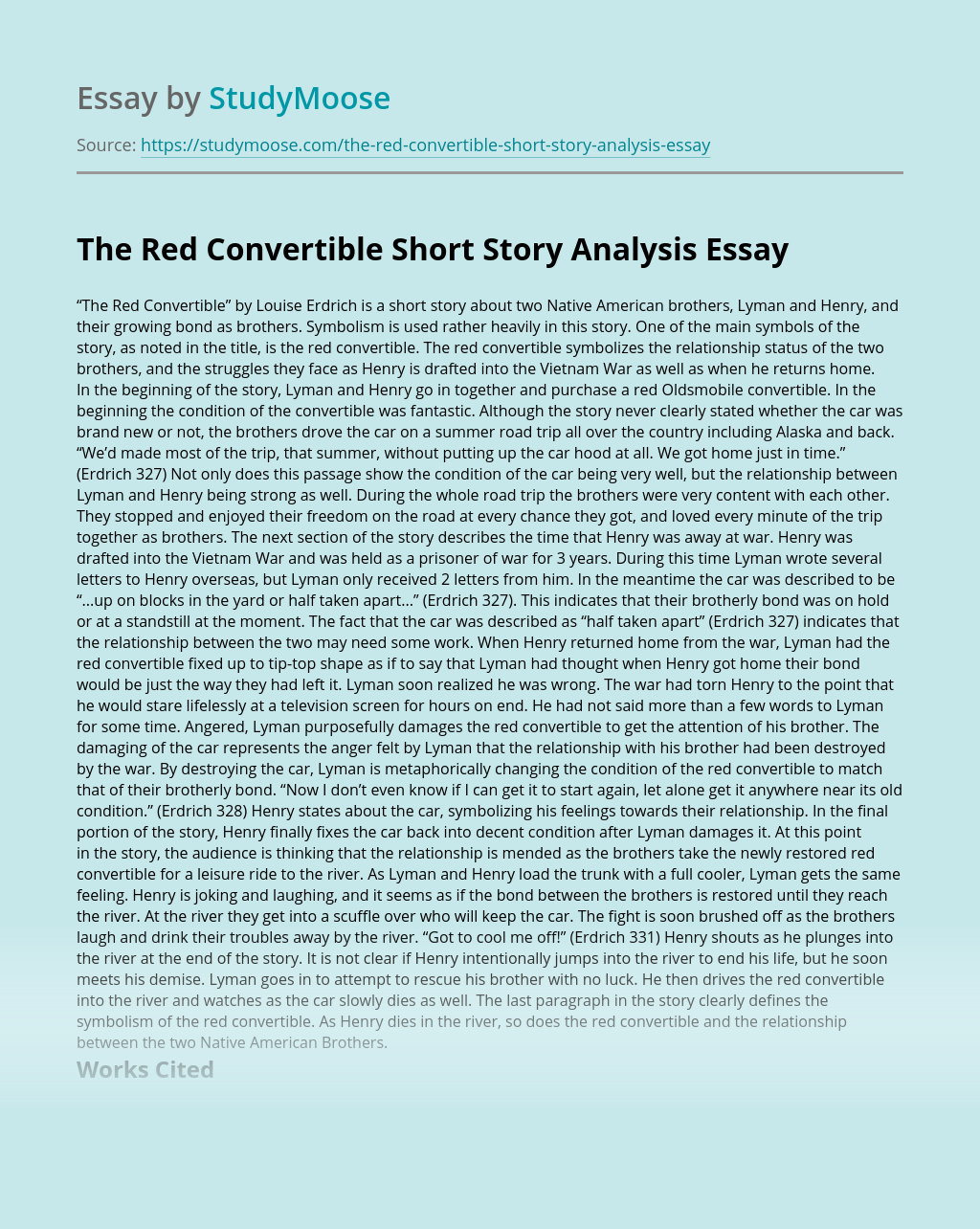