The Role Of Heroism And Bravery In Beowulf

A hero is revered for the courage and noble ideals they stand by. Heroism plays a vital part in the lives of Beowulf and Sir Gawain. These characters represent what a hero stands for, but their lives as heroes are told differently in their stories. They are both seen to be brave, noble, and skilled men on their journeys, but the strengths portrayed through these heroes are of inner and outer strength. Though while both Beowulf and Sir Gawain show feats of heroism in their stories, Beowulf is shown to be the greater of the two heroes.

Don't use plagiarized sources. Get your custom essay on
“ The Role Of Heroism And Bravery In Beowulf ”
Get custom paper
NEW! smart matching with writer

Early in the story, we learned that Beowulf was already seen as a mighty hero demonstrating his astonishing power and courage. The poet characterizes Beowulf as “the mightiest man on earth” (Line 197). They’re during a swimming match with a rival named Breca, Beowulf shows a feat of his endurance as he, “on the open sea” (Line 507), finishing a race seven-day race. While on the event, Beowulf ended up killing many sea-beasts.

Beowulf demonstrates the truth of his heroism when a storm occurs during the match. He chooses to stay alongside Breca, the weaker swimmer, instead of wanting to win the race. Even though the storm ended up separating the two, Beowulf showed that he was willing to give up winning the race rather than let the safety of his opponent jeopardized.

Beowulf is also shown to possess a great sense of loyalty, as well as the reputation of a hero. Upon learning that the monster Grendel is causing chaos and torment for King Hrothgar, he sets off to the sea with fourteen of his best men so they can aid Hrothgar in his time of need, stating “I can show the wise Hrothgar a way/ To defeat his enemy and find respite” (Line 279-280).

Aside from working to have his name known, Beowulf chooses to assist Hrothgar because he once had covered for Beowulf’s father in a time of war mending a feud that his father started. Beowulf’s father had pledged his allegiance to Hrothgar at that time, “And Ecgtheow acknowledged me with oaths of allegiance” (Line 472). Beowulf felt as if he owed Hrothgar his loyalty as payment as well. While spending his time in Hrothgar’s court, Unferth spoke with contrary words insulting Beowulf. Beowulf instead of trying to engage against him physically, he chooses to respond with intellectual words, knowing very well that his actions would not only reflect poorly on his reputation but poorly on his king, Hygelac.

In the encounters that follow between Beowulf, Grendel, and Grendel’s mother, Beowulf proves why he is known as a hero by slaying down both Grendel and its mother and saving Hrothgar’s citizens. He shows his outstanding strength and heroism by solely killing both monsters. After fulfilling his duties for Hrothgar, Beowulf returned to Denmark and then eventually becomes king. While he ends up serving his country as king for fifty years till the time came where a new threat had emerged itself upon Beowulf.

The Role Of Heroism And Bravery In Beowulf. (2020, Sep 28). Retrieved from https://studymoose.com/the-role-of-heroism-and-bravery-in-beowulf-essay 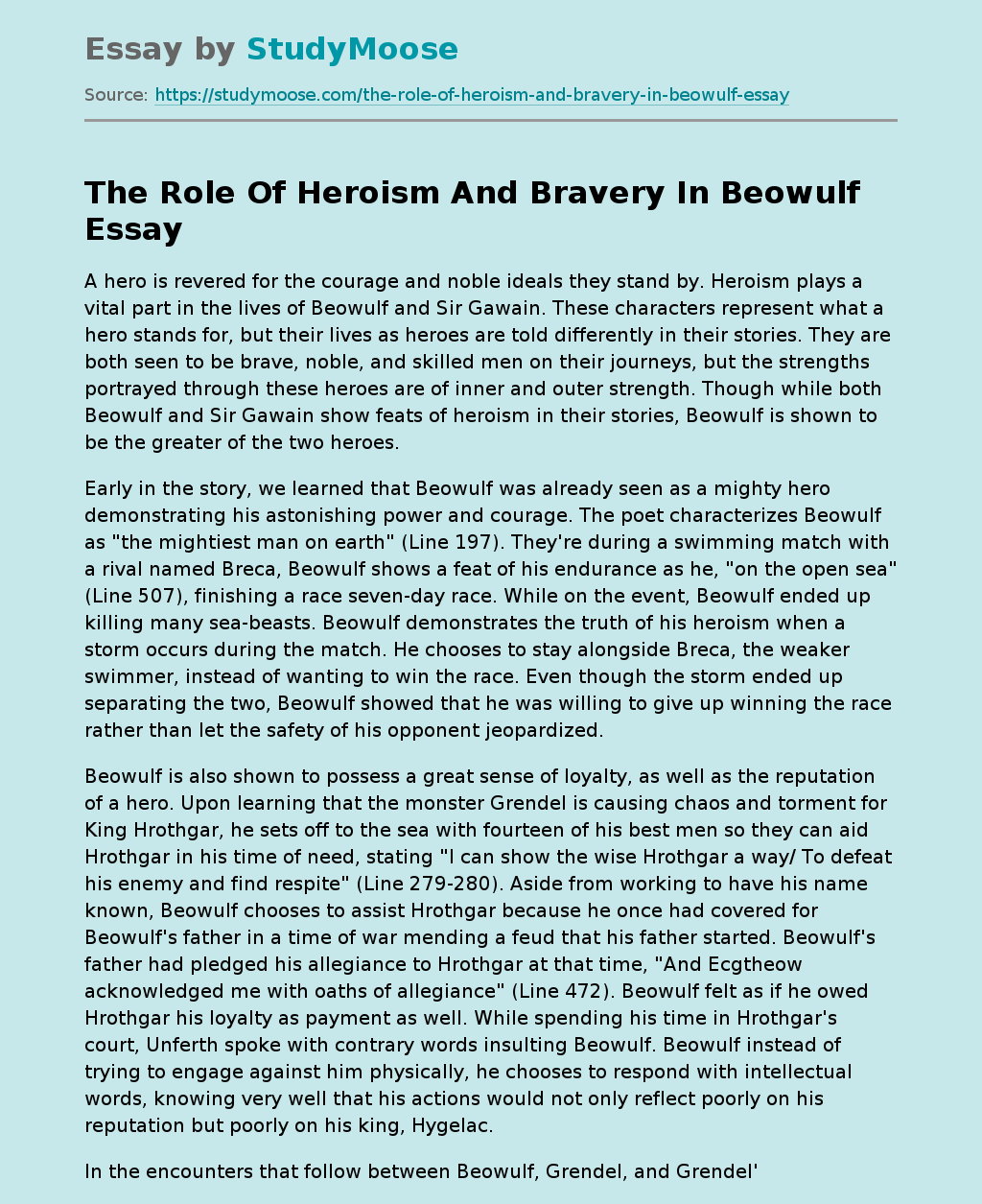