War is the worst thing a mankind can face. For me, war is always associated with sadness, loss, grief and people’s bravery. And all these themes are brightly unfolded in the story “In Another Country” by Ernest Hemingway, which is under consideration. Hemingway is an American author of the 20th century, who won the Nobel Prize in Literature in 1954. The ones of his famous works include The Sun Also Rises, A Farewell to Arms, The Old Man and The Sea.

Don't use plagiarized sources. Get your custom essay on
“ In Another Country ”
Get custom paper
NEW! smart matching with writer

The popularity of Hemingway’s is based on the themes, which are love, war, wilderness and loss, all of which are strongly evident in the body of work.

The title of the story is puzzling, as it has two meanings: direct and indirect one. At first glance, “In Another Country,” refers to the fact that the American narrator is indeed in a foreign land-Italy. But the other side of it is that the main hero is culturally, emotionally in another country.

He is at War, the country of the ‘so-called’ sickness and injuring. Now let me give you the brief reconstruction of the events. It was fall in Milan, a group of soldiers wounded in World War I received treatment at a hospital.

There, one of the main characters, the narrator of the story, wounded in his knee, saw three Italian soldiers, but felt a great wall between him and them, because he had received his medal for being an American, and they actually performed feats of bravery to receive theirs.

Another main character, the major with the withered hand taught him Italian. One day, the major became angry when Nick mentions about marriage, he burst out, because the major’s wife had just died. The major could not resign himself to the loss of his wife.

He was crushed, shattered by the news. While reading the story we can state several key-points, which help us to understand and analyze the context. And the main of them, to my mind are war and bravery. First, let me dwell upon the bravery. The attitude towards bravery is different in terms of the characters of the story. The personality of the narrator is described indirectly, through his thoughts . He wasn’t a brave man during the war. “I was very much afraid to die… and wondering how I would be when I went back to the front again’.

As for the three soldiers, there was no notion of the bravery in the targets of any of these persons. The narrator calls them “hunting hawks”. They were hunting for medals, material values, given by the government, not for the faith. The attitude of the protagonist and the soldiers are also specific due to attitude towards the war, so was the major. We get to know from the story that they are Italian. They are very patriotic people, and their duty was to protect their country, as the war was on their territory.

And the narrator was just an American, Let me quote : “I had been given the medals because I was an American…being wounded, after all, was really an accident. ” He didn’t understand why people die, what they fought for. The problem of the ‘lost generation’ arises here. The fact is that Americans were indifferent to the war. Their aim was just to participate and being wounded. As the result, the relationship between the narrator and the soldiers were specific. Let me quote: “I was a friend, but I was never really one of them… they have done different things to get their medals”, “I wasn’t a hawk”.

As for the major, he didn’t believe in bravery at at. And Through his loss we understand that for the narrator the major was the bravest man of all, as he possessed a strong mind and tried to cope with his feelings like a brave soldier. We are to admit that the author uses different stylistic device, what makes the story more expressive, captivating and interesting to read. First of all it is the usage of foreign words, for instance “Signor Maggiore”, “A basso gliufficiali! ”, which reflect the Italian atmosphere, where the action takes place.

Other stylistic device is symbolism, which, to my mind, prevalent in this story. The recovering machines are the symbol of false promises and hopes. I quote: “… there were large framed photograps around the wall, of all sorts of wounds before and after they had been cured by the machines… I do not know where the doctor got them”, and this symbol also implicate with irony, e. g. “You will be able to play football again better than ever”. Other symbols, “roasted chestnuts”, “charcoal fire”, are the hopes for the better, because they mean light and warmth.

The story makes use of repetition to emphasize the narration “In the fall the war was always there”, “It was cold in the fall in Milan and the dark came very early. ” He repeats this idea with a slightly different emphasis at the end of the paragraph: “It was a cold fall and the wind came down from the mountains. ” This description of nature here is also rather symbolic. It makes me feel the atmosphere of death and hopelessness. In conclusion I can say that it is smth bloody and sad. But through all these disasters we are to stay humans and bravery ones. The war will finish, but the human nature is eternal.

In Another Country. (2021, Nov 12). Retrieved from http://studymoose.com/in-another-country-essay 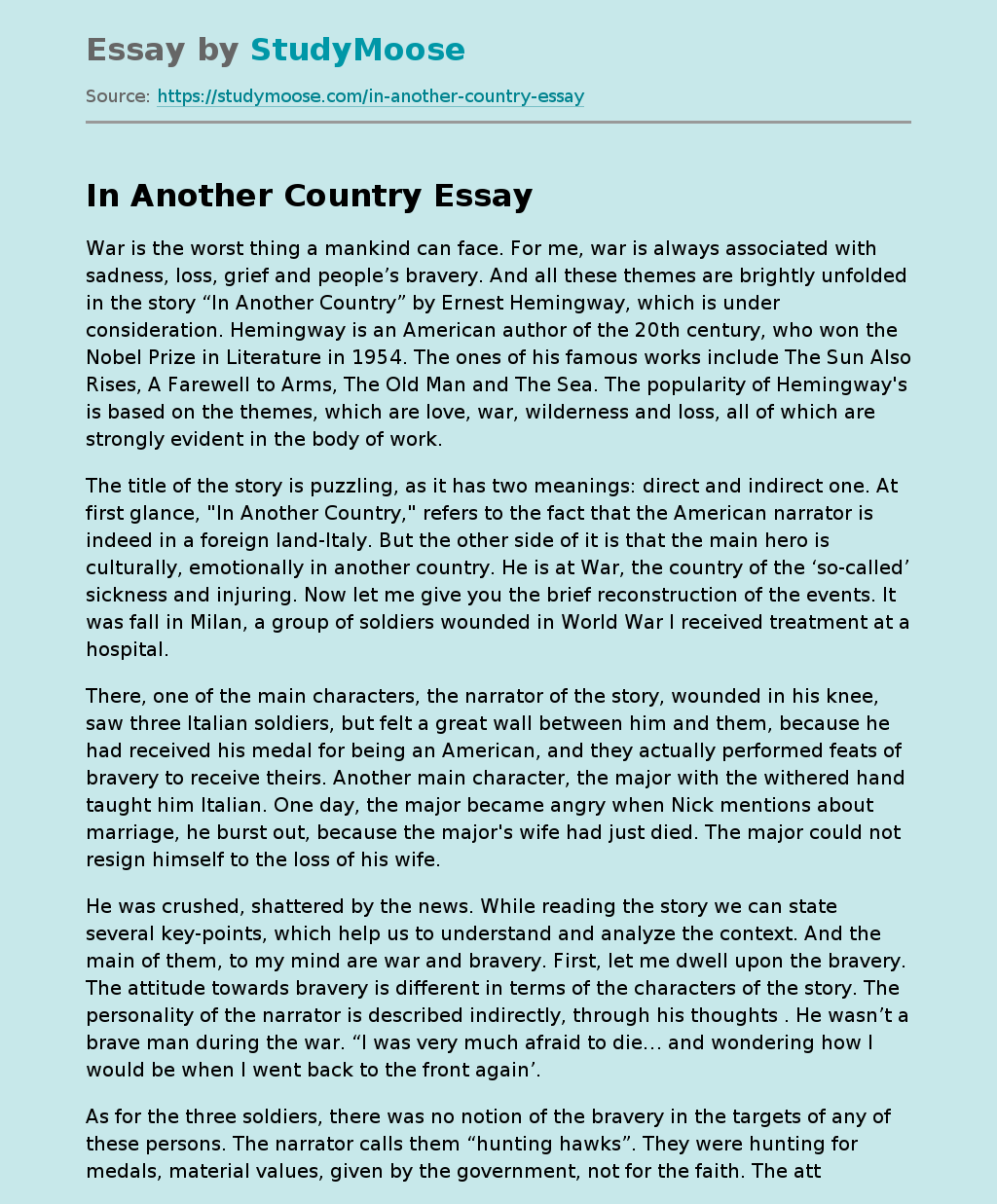