Leiningen Versus the Ants Story Analysis

Turn in your highest-quality paper
Get a qualified writer to help you with
“ Leiningen Versus the Ants Story Analysis ”
Get high-quality paper
NEW! AI matching with writer

This story was basically about the battle between the human and the ants which can eat any thing up. It shows the human versus the nature too, Leiningen as the human, and the ants as the nature. Any way, one trait Leiningen has was intelligent. In the story the quote “Even here in this Brazilian wilderness, his brain had triumphed over every difficulty and danger it had so far encountered. ”(p#1) shows Leiningen was smart because this quote had simplify he use his brain to limit to come of a plan and use it helping people.

Also the quote “When I began this model farm and plantation three years ago, I took into account all that could conceivably happen to it” (p#1) exactly saying he is intelligent, because he made a model farm that mean he already have a plan three years ago, it hard for anyone to come of a plan so he is smart. Also he use only his mind to imagine out any thing could happen, he think of any possibility and add it to the plan.

Another trait Leiningen been describe is respectable leader.

In the story the quote “But so great was the Indian’s trust in Leiningen, in Leiningen’s words, and in Leiningen’s wisdom, that they received his curt tidings, and his orders for the imminent struggle, with the calmness in which they were given”(p#1) demonstrates because of Leiningen’s hard work on the plantation and receiving the challenge of ants. He has successfully amassed the support of the most resulting in his role as a leader for his people the Indians. People listen to him, they trust him, so in the quote they were calm.

Also another quote show he was a respectable leader is “Such, indeed, was his aura of confidence that the Indians forgot their stupefied fear of the peril only a yard or two away. ” (p#4) because Leiningen change the fear of his people, made them forgot the fear of the peril very near. If someone do that it only the one who lead the group. The Indians follow Leiningen even the feeling, this prove they trust in Leiningen, and start to being into one unity group with Leiningen as the head, the Indians as the other parts.

The last trait describe Leiningen was that he was brave, in the story the quote “You’re insane! They’re not creatures you can fight—they’re an elemental—an ‘act of God! ’ Ten miles long, two miles wide—ants, nothing but ants! And every single one of them a fiend from hell; before you can spit three times they’ll eat a full-grown buffalo to the bones. ”(p#1) phrase that scariness and dangerous of the ants, and how many of them. Also tell that Leiningen not afraid of them, still plan a plantation to stop them, he is brave.

I beg any one heard of that much of ants be scared but not Leiningen, his brave get his way, he is brave enough to fight god. Another quote is “The moment I’m over the ditch, set fire to the petrol. That’ll allow time for the flood to do the trick. Then all you have to do is wait here all snug and quiet till I’m back. Yes, I’m coming back, trust me” (p#10) say that Leiningen has decided a very hard choice to scarify himself to flood away the terrify ants. But he stilled did even though it might lose his life, but he is brave enough to do it.

In conclusion, story “Leiningen versus the Ants” by Carl Stephenson shows an example of characters in a story actually living in their, by their own personality, in a story character is a living person. Just like Leiningen, in the story he been described as a intelligent person, a respectable leader, and a brave person supported by his actions and thoughts. With all these traits he also could be view as a heroic person, because all he did is not a normal person can do. We should follow his footsteps to becoming a better person, to protect your love.

Leiningen Versus the Ants Story Analysis. (2016, Sep 29). Retrieved from https://studymoose.com/leiningen-versus-the-ants-story-analysis-essay 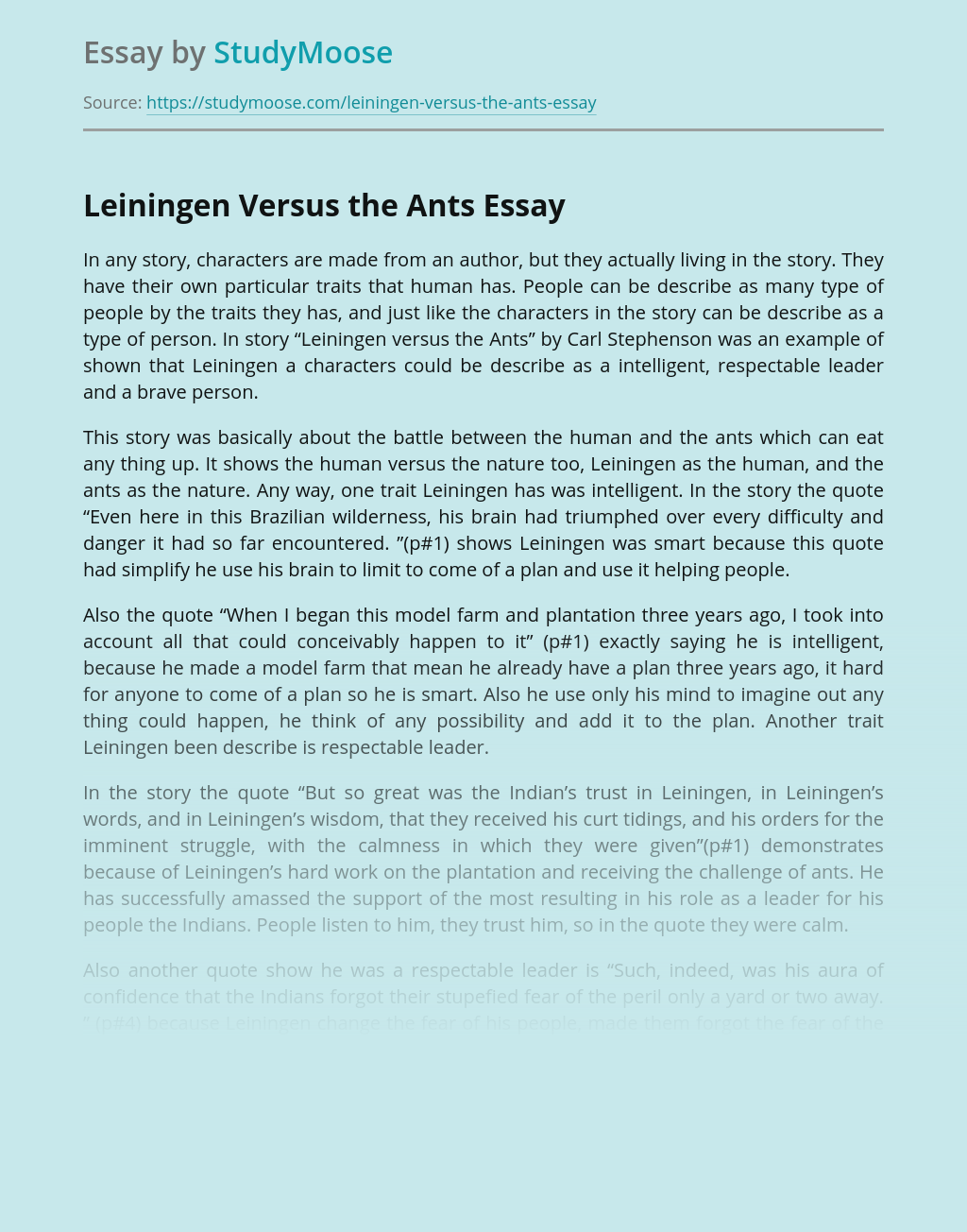 Turn in your highest-quality paper
Get a qualified writer to help you with
“ Leiningen Versus the Ants Story Analysis ”
Get high-quality paper
Helping students since 2015
Stay Safe, Stay Original