"While Hassan Is the Good Guy or the Kite Runner, Amir Is the Hero" Discuss

Amir and Hassan seem to have a “best friend” relationship. Hassan is the loyal and protecting servant who would die for Amir, he is very proud and doesn’t let his religion get in the way of his happy lifestyle. Amir on the other hand, takes into account that Hassan is a Hazara and shuns him because of this. He also dislikes Hassan for taking his father’s love from him. The only heroic thing Amir does, is rescue Sohrab. But is this justifiable for letting Hassan get raped and then forcing him to leave? Is there a break-even point in Amirs life? I don’t think it covers the cost of what he has done.

Don't use plagiarized sources. Get your custom essay on
“ “While Hassan Is the Good Guy or the Kite Runner, Amir Is the Hero” Discuss ”
Get custom paper
NEW! smart matching with writer

Hassan puts aside all the harassment and bullying, for being a Hazara, every day of his life, but in the end always has a smile upon his face and a positive attitude. He looks up to Amir with high loyalty and respect as if he was an older brother.

When in danger of a beating from Assef he is offered freedom for a small price (giving up the prized kite which he ran for Amir) still refusing, saying “Amir won the tournament, and I am running this kite for him!” He was willing to sacrifice a beating just to please Amir.

Amir has the chance to be the hero when he witnessed Hassan being brutally beaten and raped by Assef, although he fails to rescue him. It would have been so simple to just shout out then run to safety, but something else was blocking him from saving Hassan.

Is it possible that Amir was scared to stick up for Hassan because he was a Hazara?

I believe that Amir is not a hero, because he let Assef get to Hassan without stopping him, and then framing Hassan of stealing, which is something he would never do. But Hassan the good guy remains happy and forgiving until the day he gets killed. I think that it is obvious in this scenario that.

"While Hassan Is the Good Guy or the Kite Runner, Amir Is the Hero" Discuss. (2017, Jan 04). Retrieved from https://studymoose.com/while-hassan-is-the-good-guy-or-the-kite-runner-amir-is-the-hero-discuss-essay 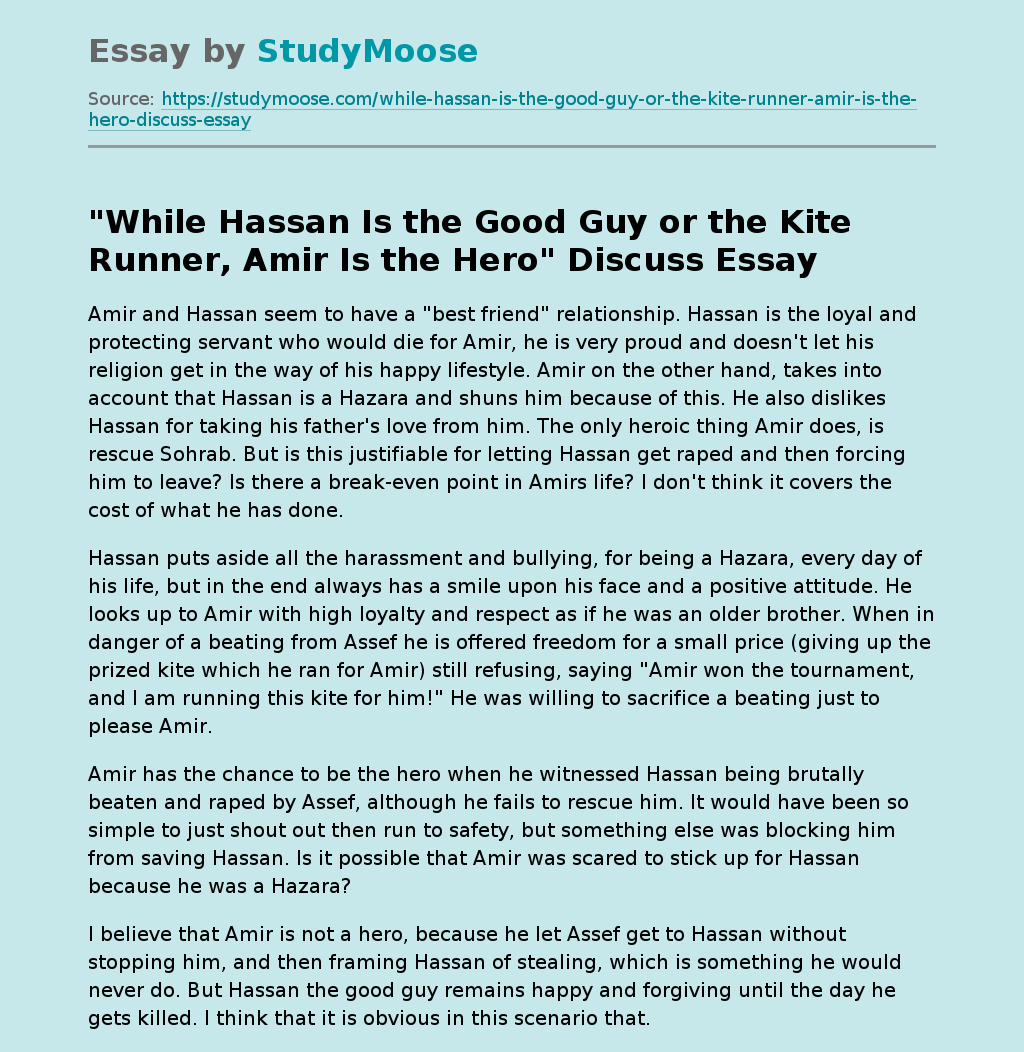