Professor Ann Woodlief describes American Romanticism by saying, it “developed its own character, especially as these writers tried self-consciously to be new and original. ” In this statement, Woodlief argues that the American romantic authors strove to distinguish some differences between American and British Romanticism. The two forms of writing were already very similar, so the authors of this time period forced themselves to find a creative way of making American Romanticism unique.

Don't use plagiarized sources. Get your custom essay on
“ Romanticism ”
Get custom paper
NEW! smart matching with writer

Hawthorne, Irving, Cooper, and Poe were all early American authors who utilized the themes of romanticism in their literature. In Hawthorne’s novel, The Scarlet Letter, he used individualism, nature, and liberty to tell his story, while Irving, Cooper, and Poe exercised the themes of supernatural effects, nature, Gothicism, and solitude to create short stories that are classified as American Romanticism instead of British Romanticism.

Nathanial Hawthorne incorporates the values of individualism, nature, and liberty into The Scarlet Letter, guaranteeing that it would be recognized as a novel of American Romanticism.

Hester Prynne’s individualism surfaces. In the beginning when she is an ordinary townsperson, she has an affair that changes her life forever. Through all the humiliation and changes that come about in her life, Hester never strays away from the kind-hearted woman she has always been. Even in the negative light, Hester is embroidering clothes for the less fortunate.

Hawthorne says: Much of the time, which she might readily have applied to the better efforts of her arts, she employed in making coarse garments for the poor. It is probable that there was an idea of penance in this mode of occupation, and that she offered up a real sacrifice of enjoyment, in devoting so many hours to such rude handiwork. (Hawthorne 58) This presents the fact that even though everyone looks down on her because of the red ‘A’ on her chest, she still remains the same kind-hearted person she has always been, and she still donates her time and goods to charity.

Nature plays a large part in this novel because nature and the forest bring happiness and consolation to Hester and Pearl. After Hester is released from jail, she finds a cottage out in the woods in order to be away from everyone else. In the town, Hester and Pearl cannot go anywhere without getting stared at or insulted, so they move into a cottage in the forest in order to get away from those awful remarks in the city. Next, when Hester takes Pearl into the woods to find Dimmesdale, she becomes brave and lets the love she feels take over.

Hawthorne portrays her outburst by saying, “So speaking, she undid the clasp that fastened the scarlet letter, and, taking it from her bosom, threw it to a distance among the withered leaves” (Hawthorne 130). In nature, Hester feels free, and she is able to take off the scarlet letter in order to be with Dimmesdale, but she puts the amulet back on before leaving the woods. In addition, Pearl is able to relate and connect to nature. Some characters in the novel believe Pearl embodies the characteristics of a child of the forest.

For example, when Hester and Pearl take a stroll in the woods, Pearl comes back with a green ‘A’ made out of grass displayed on her chest. The narrator says, “Pearl took some eel-grass, and imitated, as best she could, on her own bosom, the decoration with which she was so familiar on her mother’s. A letter,—the letter A,—but with freshly green, instead of scarlet! ” (Hawthorne 115), suggesting that in Pearl’s attempt to be like her mother, she represents her nature-like qualities at the same time. Finally, Hawthorne applies the value of liberty in his final attempt to show the differences between American and British Romanticism.

Hester achieves liberty by the end of the novel because she becomes comfortable with her sin, and she isn’t afraid to admit it to herself, and most importantly, to the rest of the world. Hester comes to such an understanding with the freedom and liberty she had in Boston that she finally achieves mental freedom of her scarlet ‘A. ’ Towards the end of the novel, Hawthorne states, “But there was a more real life for Hester Prynne, here, in New England, than in that unknown region where Pearl had found a home.

Here had been her sin; here, her sorrow; and here was yet to e her penitence” (Hawthorne 165), verifying that through all the hardships that Hester went through, she is finally able to achieve the main goal of liberty and equality. Even though she stays in Boston to feel the regret of the sins she has committed, she is able to gain liberty and equality because although she has a guilty conscience, others accept her into the society. Nathanial Hawthorne incorporates aspects of American Romanticism into his writing, proving that he is an American romantic author, but other authors contribute to American romanticism as well.

Washington Irving, James Cooper, and Edgar Allan Poe are all American romantic writers who use supernatural effects, Gothicism, nature, and solitude to illustrate the main differences between American and English Romanticism. In “Rip Van Winkle” by Washington Irving, he uses nature, supernatural effects, and solitude in order to create Rip’s character. Rip is not happy with his life at home because of his complaining wife, and his form of escape is to wander into nature and the Kaatskill Mountains.

One day, he meets a man up on the mountain and drinks the liquor the man gave him, leading to Rip falling into a deep sleep from which he does not wake up until twenty years later. Rip’s happy solitude leads him into a supernatural state because it is uncanny for a human to fall asleep for twenty years. When Rip asks Judith Gardenier about her father, she says: “Ah, poor man, Rip Van Winkle was his name, but it’s twenty years since he went away from home with his gun, and never has been heard of since—his dog came home without him; but whether he shot himself, or was carried away by the Indians, nobody can tell.

I was then but a little girl. ” (Irving 425) This revealed that Rip had been gone for twenty years, confusing him greatly. Because Rip slept for those twenty years, he experiences prolonged solitude which was the original reason he left his house and went on that journey twenty years earlier. Next, in James Cooper’s novel called The Deerslayer, Cooper utilizes the themes of solitude and the wilderness to create the character of Natty Bumppo, or Deerslayer, a very important character of American Romanticism.

Finally, in “Ligeia,” by Edgar Allan Poe, he applies the supernatural world and Gothicism to the story in order to describe the narrator’s love for Ligeia. Obsessed with the dead Ligeia, he struggles in spirit, a dark example of how Poe uses Gothicism in his writing to become an American romantic writer. Toward the end of this short story, the narrator is on opium which may be one of the causes to his strange supernatural visions. The narrator believes that his new wife has passed away, but she continues to come back to life for short periods of times.

Every time the narrator thinks that Rowena is dead, all he does is imagine Ligeia. Eventually, the woman he believes is Rowena gets out of bed and confronts him, but he soon realizes that the woman is not in fact Rowena; it is his Ligeia. The narrator says, “Can I never—never be mistaken—there are the full, and the black, and the wild eyes—of my lost love—of the lady—of the Lady Ligeia” (Poe 508). This passage explains that Ligeia comes alive in someone else’s body, a dark, supernatural possibility.

In another one of Poe’s short stories, “The Fall of the House of Usher,” Poe takes supernatural qualities to a whole new level. Usher says in fear, “We have put her in a living tomb! ” (Poe 521). In this short story, Lady Madeline is buried alive, but escapes the tomb in order to obtain revenge on her brother. Poe’s different plots are very dark, gloomy, and supernatural which are all characteristics of American Romanticism opposed to English Romanticism. Irving, Cooper, and Poe all utilize the characteristics of American Romanticism to create different images.

Hawthorne, Irving, Cooper, and Poe were just a few of the many American romantic writers of this time who helped to establish a difference between American and British Romanticism. Early American writers faced the challenge of creating their own style of writing, by incorporating the values of the supernatural themes, Gothicism, solitude, individualism, and nature into their fiction. In conclusion, American Romanticism was able to become a unique form of literature, separate from British Romanticism. 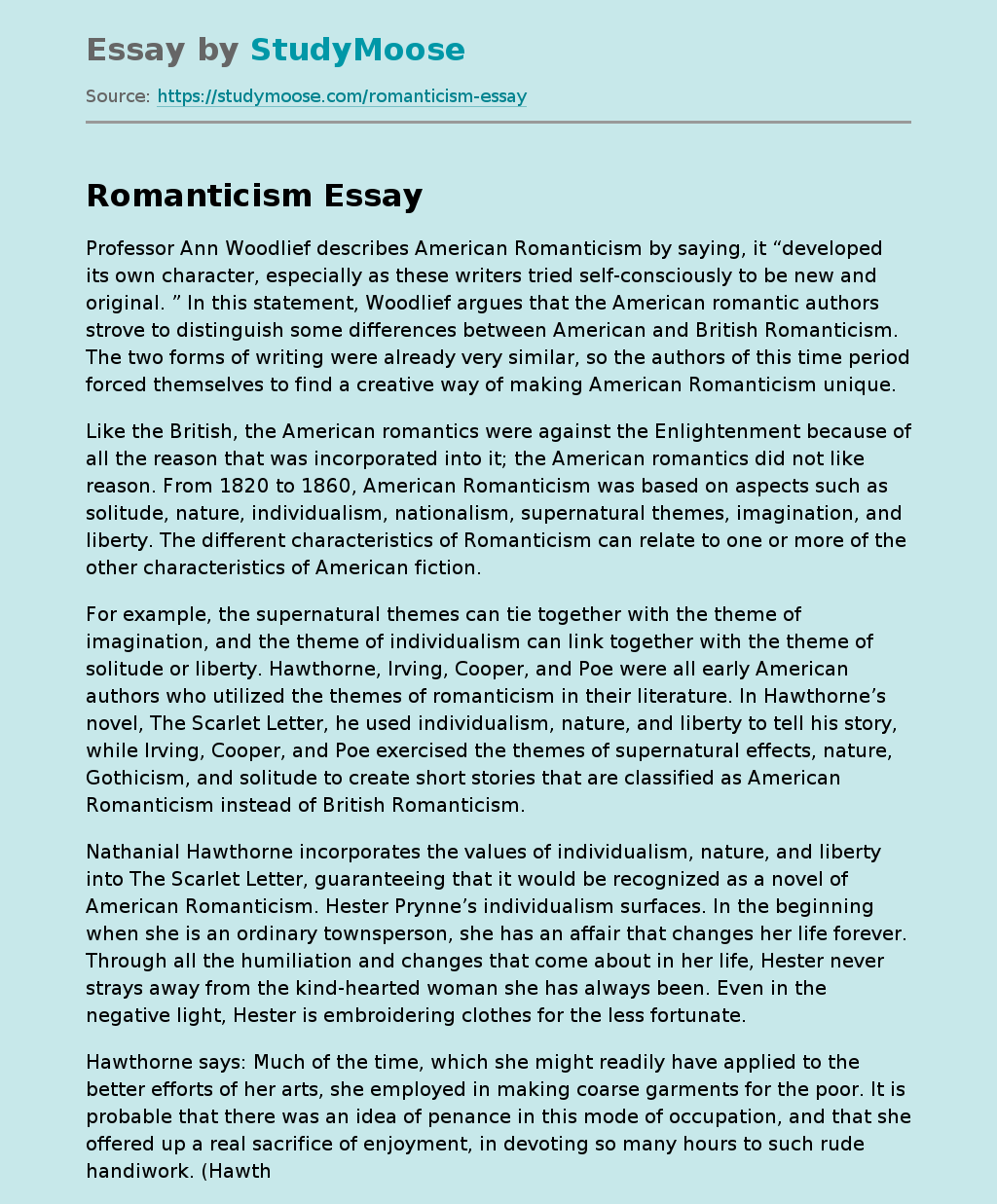