Existentialism and Character Development in Hamlet

In the play “Hamlet” William Shakespeare uses the character of Prince Hamlet to pose conversant existential questions. Existentialism is defined as “a philosophical theory or approach that emphasizes the existence of the individual person as a free and responsible agent determining their own development through acts of the will.”, this definition holds its validity when considering the ideas brought up in “Hamlet”. Existential philosophers since the late 17th like century Soren Kierkegaard have been studying questions like “How should we live?”, “who am I?”, and “What is the meaning of life”.

Don't use plagiarized sources. Get your custom essay on
“ Existentialism and Character Development in Hamlet ”
Get custom paper
NEW! smart matching with writer

These questions are the same as the ones posed in “Hamlet” and they have outlived every philosopher to ask them. The protagonist, Hamlet, in this Shakespearean play, traverses these questions, looking for accuracy and explanation for his father’s death, while trying to keep his sanity and by the end demonstrates his existential nature.

In the beginning of the play, Hamlet uses his intellect and ability to employ to logic to approach every situation.

His emotions and instincts do appear, but he chooses to suppress them, for example, the first time Hamlet encounters the ghost of his father, he refuses to believe that the ghost is his father, or actually exists, although he does react to the apparition with emotion. “That I will speak to thee. I’ll call thee “Hamlet,” “King,” “Father,” “Royal Dane.” O, answer me! Let me not burst in ignorance, but tell Why thy canonized bones, hearsèd in death, Have burst their cerements; why the sepulcher, Wherein we saw thee quietly interred, Hath oped his ponderous and marble jaws, To cast thee up again.

What may this mean That thou, dead corse, again in complete steel” (Act 1 Scene 4) Hamlet becomes increasingly confused, his emotions and sense of logic are conflicting, he wants to believe the ghost is not possible, however his feelings direct him contrarily. Due to this conflict, Hamlet resorts to a plan he devised where actors in a play will reenact the death scene of king Hamlet, as described by his ghost, hoping to view an atypical reaction from the new king Claudius, this will ensure the truthfulness of the ghost’s information.

Throughout the play, Hamlet’s mental state and therefore ability to use logic degrades slowly, every scene one can see him unravelling, layer by layer. Hamlet very shortly into the play begins to tackle an existential question, he speaks a few eminent words “To be or not to be—that is the question: Whether ’tis nobler in the mind to suffer The slings and arrows of outrageous fortune, Or to take arms against a sea of troubles And, by opposing, end them. To die, to sleep— No more—and by a sleep to say we end The heartache and the thousand natural shocks That flesh is heir to—’tis a consummation Devoutly to be wished. To die, to sleep— To sleep, perchance to dream.” (Act 3 Scene 1) This is Hamlet beginning to contemplate suicide, his uncertainty, inner tension and anxiety cause him to doubt the higher power he believes exists. Before Hamlet was able to unify his emotions and reason, he committed an act of insanity, undeservingly criticizing ophelia for numerous things, this is most likely due to him losing self control and reason along with it. Hamlet, however is able to act reasonably and forego the temptation to commit suicide, worried that he will be forever damned to hell, he instead consciously makes the decision to avenge his father. Hamlet has begun to act on more of an existential basis.

In Act four Hamlet is astonished by fortinbras actions to go to war over an inconsequential matter. “ Truly to speak, and with no addition, We go to gain a little patch of ground That hath in it no profit but the name. To pay five ducats, five, I would not farm it; Nor will it yield to Norway or the Pole A ranker rate, should it be sold in fee.” Hamlet ponders on the idea that an entire army will act on such a small matter. Hamlet is also upset by his inability to kill Claudius, and compares the actions of fortinbras to his own, he concludes that humanity is barbarous and no one is safe from humanities self destruction. This is a main point of existentialism brought up by Hamlet. He the declares ‘My thoughts be bloody, or be nothing worth!’ (Act 4 Scene 4). Hamlet is attempting to become better at acting on a purpose be knows is righteous without forethought. This makes Hamlet even more existential and less reflective.

In the conclusion of the play, Hamlet does end up killing Claudius, but he is not acting from his sole thoughts, instead on the events that have occured around him. Hamlet is left with two minutes to live and nothing left to lose, so he kills the king. Prince Hamlet developed from a very reflective, slow to take action character, but throughout the play he developed an existential side to him, that in the end lead to him cease to deprive himself of the vengeance he so desperately wanted. That final action of accepting his own fate defines Hamlet as existential in a literature where existentialism did not clearly exist.

Existentialism and Character Development in Hamlet. (2021, Apr 26). Retrieved from https://studymoose.com/existentialism-and-character-development-in-hamlet-essay 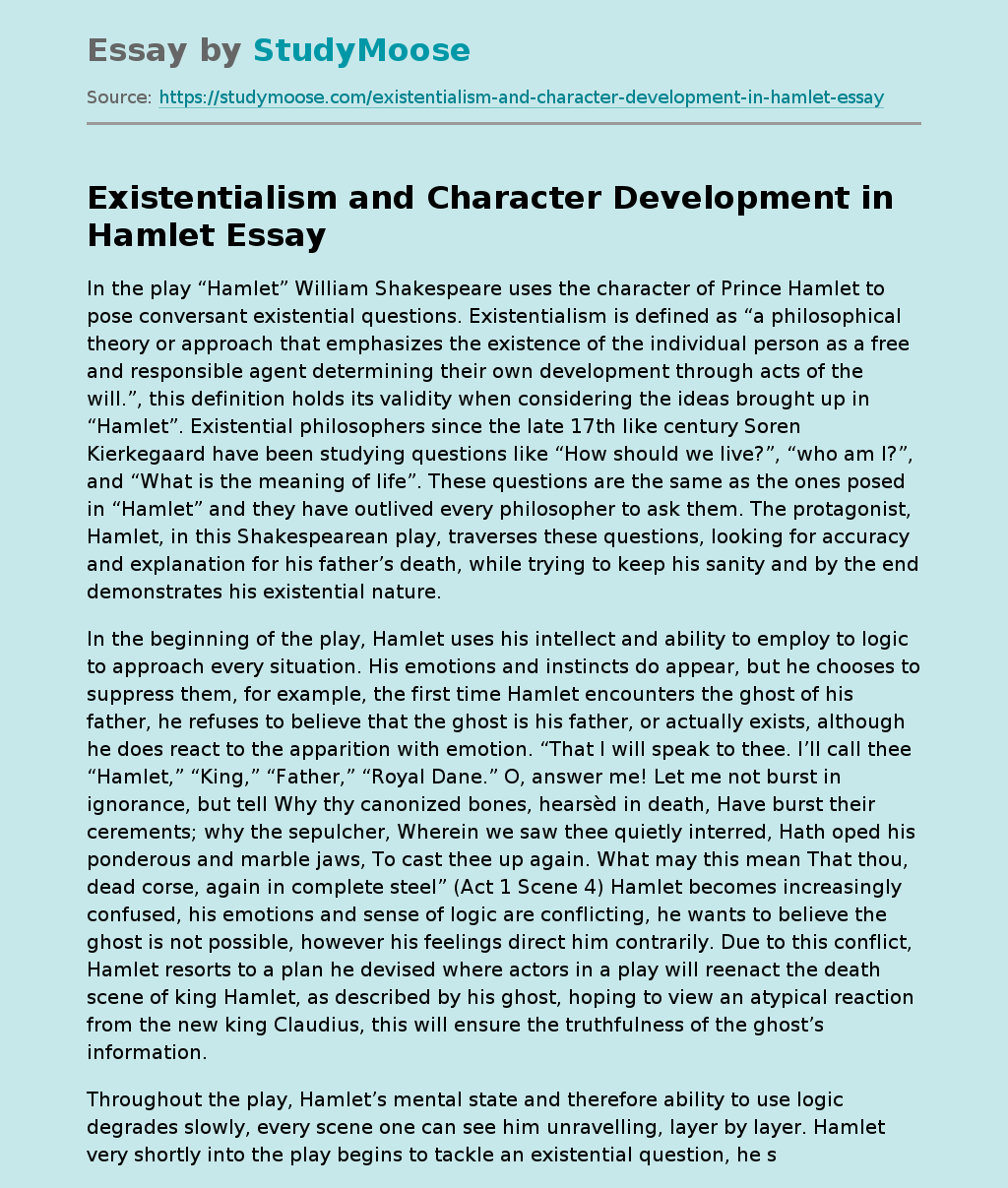