According to Carl Cohen, “A right, properly understood, is a claim, or potential claim, that one party may exercise against another. The target against whom such a claim may be registered can be a single person, a group, a community, or (perhaps) all humankind”(Cohen 1986). Cohen’s interpretation of “rights” directly suggests only human beings can make moral claims against one another, put down moral laws for themselves and for others and, only humans are members of communities that are subject to moral rules.

Don't use plagiarized sources. Get your custom essay on
“ On Animal Rights: Tom Regan or Carl Cohen? ”
Get custom paper
NEW! smart matching with writer

Since nonhuman animals do not possess moral capabilities, cannot self-legislate, and are not really members of a moral community, hence, animals cannot possess rights. Cohen added that rights are a complex subject. It involves knowing who holds the right, what right it is, and to whom the right is held. Adding to the complexity are the sources of rights which are either embedded in law and the constitution, based in moral principles with no legal hold, or from both moral principles and law.

But regardless of the complexity, rights in general are claims or potential claims within a society of moral agents of which nonhuman animals are not a constituent. Cohen imply that nonhuman animals do not have the ability to make free moral judgment and exercise or respond to moral claims, which is the foundation of the dispute about animal rights. However, it does not mean humans can do anything to the animals as they please. Humans are at least compelled to treat other creatures with decency and concern as sensitive and responsible human beings.

Cohen’s critic disputes that rights do not depend on moral capability because if having rights require individuals to make moral claims or relate to moral laws, then, humans with brain damage, in comatose, or senile must be devoid of rights which is absurd. Cohen countered the critics by reasoning that disabled persons unable to carry out complete moral functions natural to humans is not the basis from being excluded from a moral community.

For the same reason that capacity for moral judgment is natural to humans, having disabilities is an indispensable characteristic of humanity and should not be wrongly used to sort humans. Another objection on Cohen’s arguments is that there can be no concrete moral difference between humans and other animals since nonhuman animals also exhibit characteristics of moral importance like love, interdependence, and rationality. Nonhuman animals also exhibit needs and liking, care the young, and communicate with one another. Cohen did not refute the objection.

Animals exhibit fear, intelligence, instinct and other remarkable behaviors. However, Cohen stressed that animal behavioral patterns is not the issue. The true concern is the inability of nonhuman animals to grasp moral principles that inhibits membership to the moral community. To further emphasize the point, Cohen explained that in law, a criminal act will be considered guilty if the actor is aware of the deed. Therefore, no animals can ever perform an illegal act in view of the fact that assertion of moral rights is inapplicable to nonhuman animals.

Tom Regan believes that “To have a right is to be in a position to claim, or to have claimed on one’s behalf, that something is due or owed, and that the claim that is made is a claim against somebody, to do or forbear what is claimed as due”(Regan 2001). Regan, in his version, refers to “due” or “owed” as respectful treatment(Nobis March 2004). Regan deemed it true that one of the most basic human rights is the right of a person to be treated with respect. According to Regan, animal rights philosophy is based on logic being respected(Regan 2007).

Animal rights philosophy insists on this logic and believes it as the truth. Furthermore, this philosophy rejects that nonhuman animals exist to serve humans, through morally impartial and scientific reasons, by justifying the rights of other animals. Regan added that animal rights philosophy is inflexible in advocating total end in animal agriculture, trade of flesh of dead animals, eradication of hunting and trapping, and abolition of exploitation of other animals. These practices are acts of injustices to other animals. Critics question Regan in equating humans with animals.

Regan’s stand is that humans and other animals are not equal in every way. However, many other animals exhibit rational actions and other behavioral patterns like humans. From this view, humans and animals are the same. Another major question regarding Regan’s argument is the inability of nonhuman animals to respect human rights and therefore, humans have no obligation to respect other animals. Regan answered that there are many situations wherein humans do not or cannot respect other people’s rights like being mentally deranged, infant children, and persons in a coma.

However, individuals in those situations are not treated disrespectfully. Nonhuman animals are due the same respect. Based on the comparison between the argument of both Carl Cohen and Tom Regan regarding animal rights and how their respective arguments are defended, I can say, in my opinion, that Carl Cohen makes the best argument regarding animal rights. My reasons for choosing Cohen is simply because of Cohen’s testimonies which are based on actual scenarios while Regan’s arguments are mostly, if not all, relying on “logic”.

In my opinion, for animal rights to be considered to the extent of what Regan is asking, Regan’s arguments must not dwell on discounting Cohen’s arguments. Rather, it should find a way to satisfy Cohen’s position. 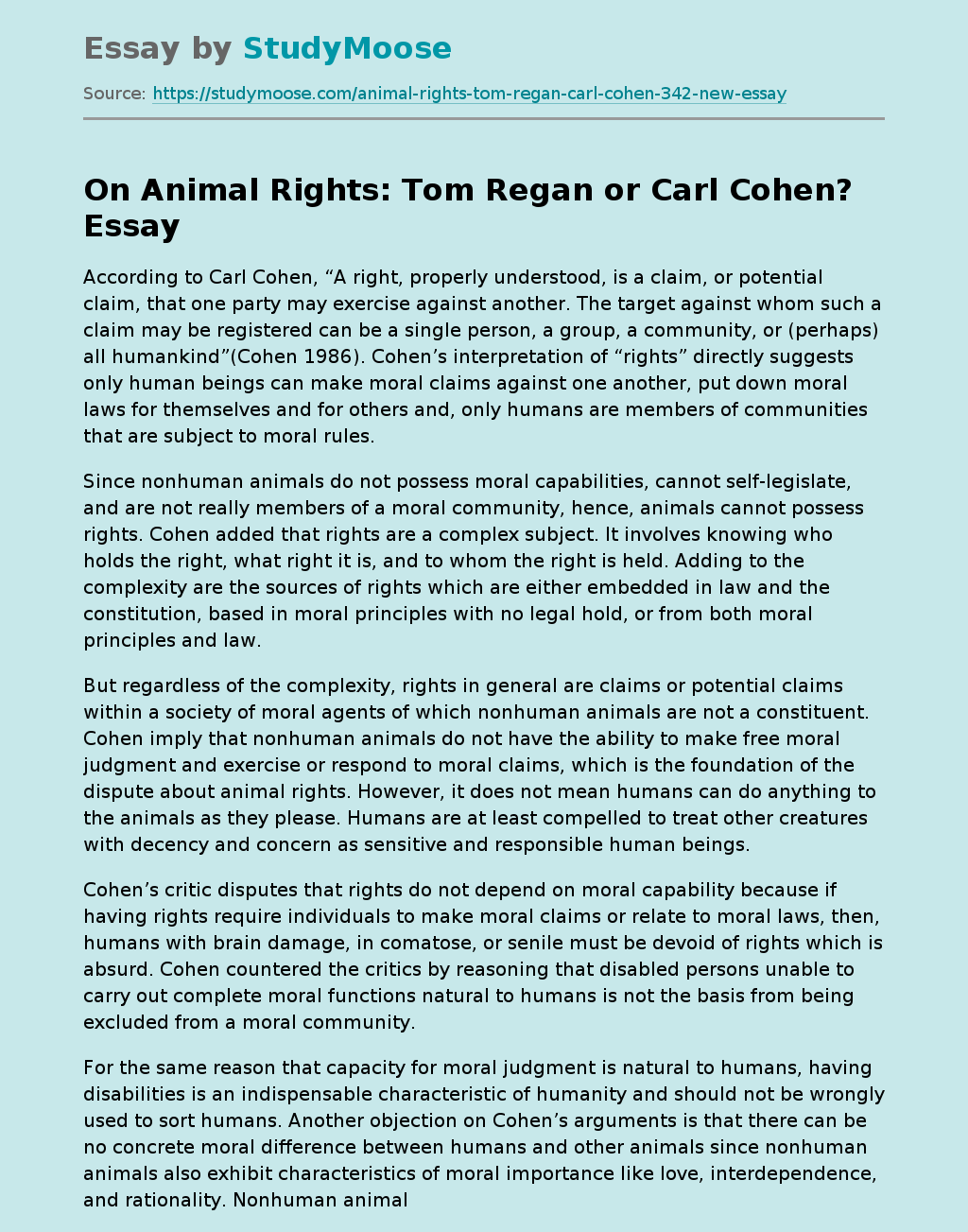