Carl Jung and the Spiritual Anima and Animus

Don't use plagiarized sources. Get your custom essay on
“ Carl Jung and the Spiritual Anima and Animus ”
Get custom paper
NEW! smart matching with writer

On, July 26, 1875 Carl Gustav Jung was born in Switzerland. Jung was the fourth child of Paul Achilles Jung and Emilie Preiswerk and of the four children he was the only surviving child (Cherry). During Jung’s childhood, he chose to be by himself. According to Alfred Myers, “He was happy when he was in isolation with his thoughts. ” In his student years, he elected to study medicine. But one day he was fascinated by a book on spiritualistic phenomena.

“The phenomena described were similar to those stories he had been hearing in the countryside.

He also knew that similar stories existed in all parts of the world, from people of different religions. So, he concluded, these phenomena must be connected with the human psyche” (Myers). Finding this book lead to the change of studying medicine to studying psychiatry. In 1906, a friendship started between Jung and Sigmund Freud, the founder of psychoanalysis, when Jung sent Freud a collection of early papers that he entitled ‘Studies in the Word Association’ (Myers).

This sparked a conversation between the two that lasted 13 hours with barely any breaks.

While working together, Freud and Jung had a few disagreements: According to Jung (1963/1989), the first real crisis in their friendship came in spring 1909, from the following incident. Jung visited Freud in Vienna and asked his opinion on precognition and parapsychology. But Frued was too materialistic and rejected these matters in a way that upset Jung. A strange thing happened then. As Freud was leaving, Jung felt his diaphragm burning and a very loud crack came from the bookcase next to them. When Jung told Freud that this is a perfect example of paranormal phenomenon, he still denied it.

Then Jung predicted that in a moment there would be another loud noise. And he was right; a second loud crack came from the bookcase. Freud remained puzzled and this incident raised his mistrust towards Jung. (Myers) The friendship between the two came to an end in 1913. Due to the different views of the psyche between Frued and Jung, the psyche became the most important element of Jung’s theory. The psyche is divided into three parts: the ego, personal unconscious and collective unconscious.

The ego is what Jung connects with the conscious and is comprised of the persona and the shadow. A person’s persona is what they show to the world; whereas, the shadow is a part of the self which a person is ashamed and guilty about. Von Franz states, “It even seems as if the ego has not been produced by nature to follow its own arbitrary impulses to an unlimited extent, but to help to make real the totality- the whole psyche” (163). The personal unconscious is both the memories that are easily brought to mind and memories that have been concealed.

In The Adult Development of C. G. Jung, John-Raphael Staude states: “Unless the unconscious material is not only analyzed and interpreted but also integrated into the conscious life of the subject, the encounter with the unconscious is unlikely to have any positive lasting effect” (83). Also known as the ‘objective psyche,’ the collective unconscious contains archetypes and is the holder of all human experiences that we can never be directly conscious of as a species. Staude states in The Adult Development of C. G.

“Archetypes are inherited predispositions to respond to the world in certain ways. According to Jung, “The archetypes are structure-forming elements within the unconscious” (Frager). A few of the main archetypes are the shadow, the self, the anima and the animus. The shadow is the negative tendencies that and individual wishes to repulse. These tendencies include our animal instincts and our undeveloped negative and positive qualities (Frager). In Carl Jung, C. George Boeree states: It is the “dark side” of the ego, and the evil that we are capable of is often stored there.

Actually, the shadow is amoral — neither good nor bad, just like animals. An animal is capable of tender care for its young and vicious killing for food, but it doesn’t choose to do either. It just does what it does. It is “innocent. ” But from our human perspective, the animal world looks rather brutal, inhuman, so the shadow becomes something of a garbage can for the parts of ourselves that we can’t quite admit to. (par. 32) Another archetype is the anima. “The anima is the female aspect present in the collective unconscious of men” (Boeree).

Hera represents the romantic stage of the anima. The anima in this stage is a collective an ideal sexual image. The Virgin Mary is the one who represents the spiritual anima. Lasting relationships with religious feeling defines the spiritual anima. The last stage of the anima is the wisdom stage represented by Sophia. In this stage the conscious brings forth the unconscious. Frager states, “As the animus/anima and its influence on the individual is recognized, it assumes the role of liaison between conscious and unconscious until it gradually becomes integrated into the self.

Jung views the quality of this union of opposites (in this case, masculine and feminine) as the major step in individuation. ” The spiritual anima, The Virgin Mary, is one who has religious feeling. The Virgin Mary, mother of Jesus, is of the Christian religion. Since she is the mother of Jesus, she is also the mother of all believers. The Virgin Mary had long relationships with God and her son Jesus. She showed dedication to God as she never left his side as a servant. Although she was highly favored by God, she suffered as she was known as an unwed mother and loses her son to cruel murder.

Being God’s servant would cost The Virgin Mary dearly, but she still stayed by his side. Her son Jesus was rejected by many people and she was one of the only people to stay by his side. She stood next to him from his birth, as her child, to his death, as her savior. The Virgin Mary best portrays the spiritual anima as she had dedicated lasting relationships with religious feelings. The last archetype is the animus. The animus is the male image in the psyche of women. Loura Griessel states:

A women would first be in the Feminine in the early period of unity of the primal self, where she has a tendency to remain because of her bodily conditioned identity with her mother. The experience of the Masculine is awakened in her only in projection onto a numinous otherness with whom she becomes enthralled. From this state of possession by an impersonal luminosity, the young woman must be redeemed by a “hero” with whom she relates as his partner/wife. Thus she takes up the position of the feminine, complementing him as a partner by carrying these modes of consciousness for him, just as he carries the Masculine functions for her.

(par. 3) Having trouble feeling a sense of individuality can be caused if a woman is not connected with the animus. The characteristics of the animus are aggression, authority, violence, oppressive behavior and command (Vicari). In health of the body and relationships, balance is essential. A women’s animus is brought out by the influence of her father in her home life. “A woman will unconsciously draw in her animus through her relationships. If her animus has possessed her, she will automatically make men withdraw into their anima (female side) as no one can argue with an animus and win”ю

“The Woman’s job is to constantly review and evaluate her opinions and ideas to be sure that the Animus does not take over or on the other side, become suppressed. She must strive to honor her true self and constantly seek wholeness with herself. The man needs to embrace the Anima but the woman needs to separate herself” (The Anima/Animus). The spiritual animus can be represented by Hermes, the son of Zeus. He was a messenger of the gods and a guide for the dead souls to the underworld. Hermes showed long relationships with Odysseus and Perseus as he aided them in their quests. He was known for his helpfulness to mankind.

His spiritual side is brought out when he brings the dead souls to the underworld. Hermes was the only one to go to the underworld and back to the world. He was very spiritual in that way which gives him the ability to portray the spiritual animus. The next archetype, the self, is the most difficult to understand and the most important personality archetype (Frager). In a united way, the self directs the role of the whole psyche. Frager states, “The self is depicted in dreams or images impersonally (as a circle, mandala, crystal, or stone) or personally (as a royal couple, a divine child or some other symbol of divinity).

Great spiritual teachers, such as Christ, Muhammed, and Buddha, are also symbols for the self. ” In conclusion, Carl Jung’s theory has set a whole new look on psychology. He went in a new direction to come up with different ways that humans are able to think and interact with each other. Jung separated the psyche into the ego, personal unconscious, and collective unconscious and from there branched out the archetypes of the shadow, self, anima, and animus. He brought to the world a new theory of the way the brain works and why people act the way that they do.

Carl Jung and the Spiritual Anima and Animus. (2016, Oct 31). Retrieved from https://studymoose.com/carl-jung-and-the-spiritual-anima-and-animus-essay 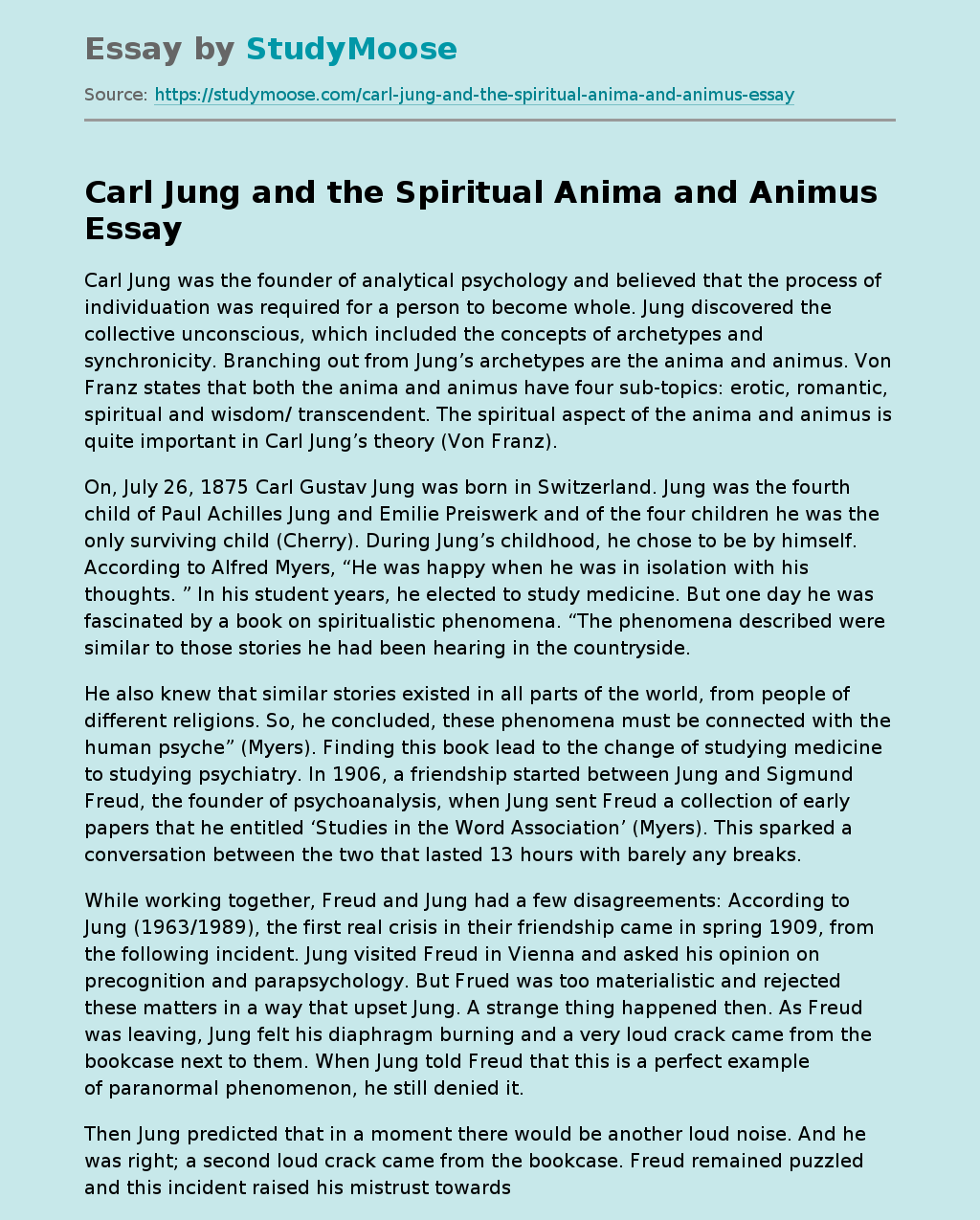