A Swiss psychiatrist and psychoanalyst, Carl Jung, who founded analytical psychology and proposed that humans are born with 4 inherited archetypes from the collective unconscious; the Self, the Persona, the Shadow and the Soul Image. These four archetypes are present within literature, through the majority of the characters. Using Jungian analysis to examine John Knowles A Separate Peace reveals that Gene is in denial of his shadow, his friend Phineas has found balance with his anima and persona, and Leper is dominated by his anima.

Don't use plagiarized sources. Get your custom essay on
“ Carl Jung: Psychiatrist and Psychoanalyst ”
Get custom paper
NEW! smart matching with writer

Gene is in denial of his shadow after jouncing Finny off of the tree. To Jung, the shadow represents the unconscious aspect of personality which the ego decides to ignore. Similar to most adolescents, Gene struggles through the stages of consciousness and ultimately gains the freedom to control his own life as his ego moves out of his unconscious and he becomes an adult. He justifies causing Finny’s fall by saying, ‘It was just some ignorance inside me, some crazy thing inside me, something bling?'(Knowles 183).

Gene starts to deny his shadow as he grows closer to his persona. Later in the novel, Gene takes a trip to Vermont to visit Leper, a fellow Devon student that enlisted in the war. Leper was affected by the war and wasn’t able to return to Devon.

As Leper describes his tales, Gene has an outburst, yelling,’Do you think I want to hear every gory detail! Shut up! I don’t care¦. This has nothing to do with me.

Nothing at all!’… I turned around and began a clumsy run across the field’ (Knowles 156). Gene’s shadow causes him to yell at Leper in an aggressive manner, causing Leper to be confused. Leper’s story cause Gene to feel a fear he didn’t know he had. Gene realizes that the true savage nature of man is within everyone, including himself. He must face his shadow and understand that he did in fact jounce Finny off the limb.

Finny, Gene’s ‘best friend’ is outgoing, amazing at sports, and is one of the most popular boys at Devon, Finny, unlike other boys, has found a balance between his anima and persona. The anima represents femininity; an inherent ability to nurture and care, whereas persona a mask, or the aspect of someone’s character that is presented to or perceived by others. One day Finny decides to wear a pink shirt, pink is the color associated with females. Other boys start making fun of him and saying, ‘It makes you look like a fairy!’Does it?’ He used this preoccupied tone when he was thinking of something more interesting that what you had said’ (Knowles 24). When Finny wears the pink shirt and tie as a belt it proves how Finny is in acceptance of his anima and he is unbothered by what other people are saying. On the other hand, Gene and Finny share a rivalry that neither of them really know about, Finny is dominated by his athletic persona and often distracts Gene from his studies, causing Gene to lash out at Finny, yelling ‘Studying!’ I snarled. ‘Studying! You know, books. Work. Examinations.’…Okay, we go. We watch little lily-liver Lepellier not jump from the tree, and I ruin my grade.’ (Knowles 26).

This further demonstrates how Finny is in balance on his persona and anima, by leaving Gene alone do his studies he is finding a midpoint between person and anima to show Gene he cares about him. Finny is dominated by his athletic persona, he is the only character who’s not beaten by himself, but a victim of everyone else’s personal defeat. Leper is dominated by his anima, because he is seen as feminine to both Gene and Finny. Leper is a peaceful, quiet, contemplative boy. He is also the first of all the boys to join the war. He becomes the hero all the boys wanted to be, Leper becomes a reflection of all the boys’ dreams of their own future selves in the army., ‘…We were all at our funniest about Leper, and we all secretly hoped that Leper, that incompetent, was as heroic as we said’ (54). They all wanted to be like Leper even if they didn’t show it. Coming back from the war Leper was accepted by the darkness of a man’s heart, his innocence was taken out of him, and when he came back he was not nearly as feminine as before.

When Gene visits Leper he found that he was hallucinating about men’s heads on women’s bodies and arms of chairs turning into human limbs, Leper was putting horrific images into Gene’s head. Gene trying to straighten out his friend says ‘Don’t tell me who’s got me and who hasn’t got me. Who do you think you’re talking to? Stick to your snails, Lepellier’ (136). When Leper returns from the war he has drastically changed, he isn’t the same anima driven boy he used to be, he’s now a mask of his old self. Leper’s anima starts to fade out when he joins the army and his persona starts to take over. A Separate Peace displays a range of different psychoanalytic behavior through three main characters, Gene, the protagonist of the novel, is in denial of his shadow, his friend Phineas who has found balance with his anima and persona, and Leper who is dominated by is anima. These three archetypes have a big effect on the events that happen to and mental states of characters throughout A Separate Peace as well as many other novels. 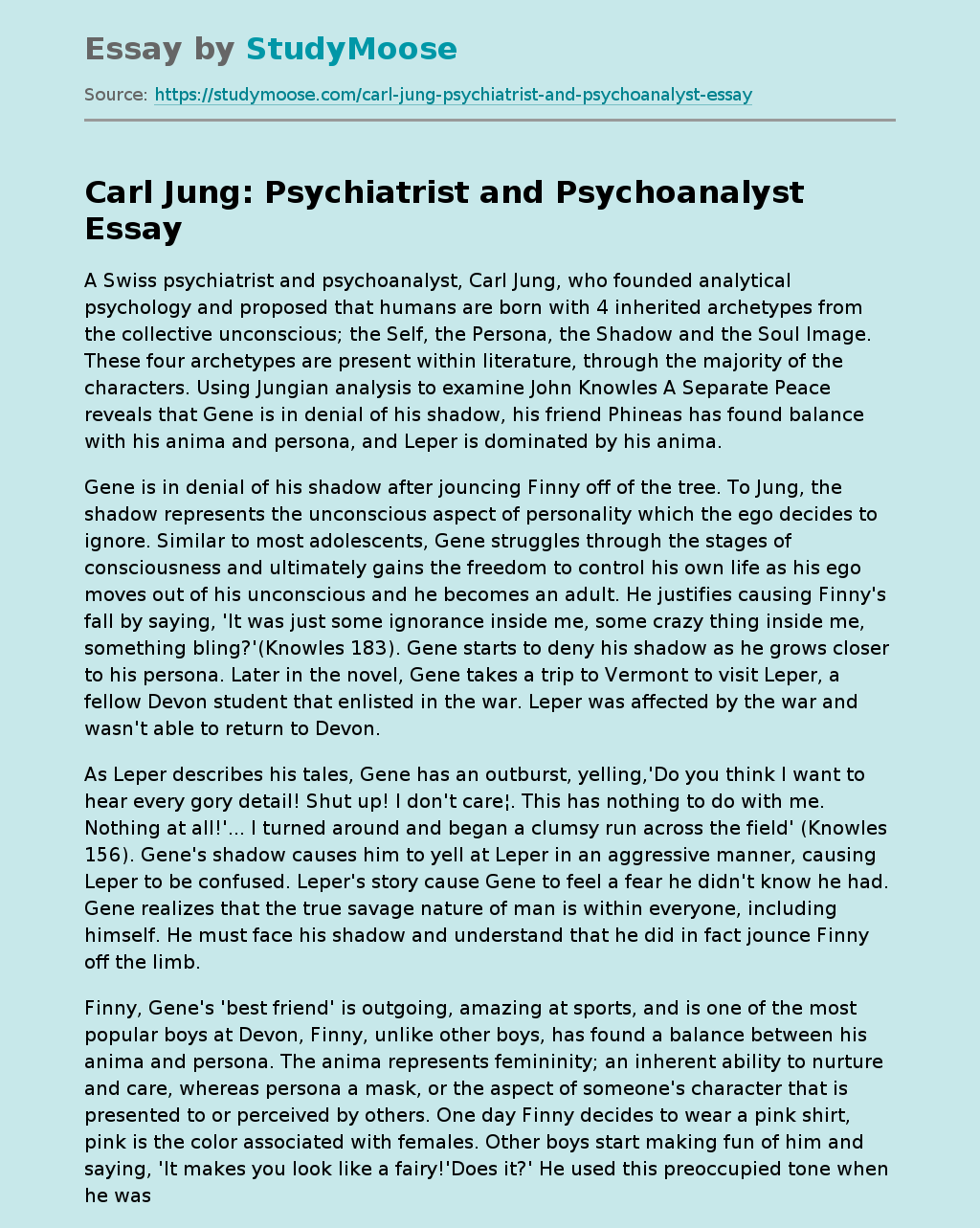