Sigmund Freud and Carl Jung: similarities and differences in dream analysis Sigmund Freud and Carl Jung are two renowned psychoanalysts who contributed great work to the interpretation of dreams. Carl Jung began as a student of Sigmund Freud, but upon their first interactions he had doubts about the basis of Freud’s work stemming from a purely sexual nature and leading to his sexual (McGowan, 1994). Jung was greatly influenced by Freud’s dream work involving the resistance of interpretation of dreams, and used this basis of knowledge to help create his own theory regarding dream interpretation.

Don't use plagiarized sources. Get your custom essay on
“ Sigmund Freud and Carl Jung ”
Get custom paper
NEW! smart matching with writer

?Freud placed sexuality at the core of human beings and made use of the human eros to shape the format of conversation where we would reach out beyond and attempt to change even the most fixed structures of our psyche, because even though we have our own ways of changing in response to certain conversations, we tend to view the world in a relatively constant sense.

He called this conversation psychoanalytic (Lear, 2005). Freud believed that dreams point beyond their superficial meaning to reveal sources of desire deep within the dreamer.

Resistance arises due to the dreamer’s censorship which preserves the deformed dreams even once the dreamer wakes up. Resistance also occurs when a dreamer has parts missing or they cannot or will not remember certain parts of their dream. This resistance is a sign that a conflict is present and wants to be expressed. Freud also believed that dreams are a way to obtain wish fulfillment, usually that of suppressed sexual wishes. These wishes are internal stimuli that become a visual hallucinatory fulfillment within the dream. The dream activity is not just an expression of a wish, but it is also gratification (Lear, 2005).

These three principles display the notion that Freud was not only concerned with the interpretation of dreams, but the self-interpretation by the dreamer. The dreamer must say what their dream meant and do so by explaining how the dream fits into their lives as a whole and why it matters (Lear, 2005). Jung called the relationship between the unconscious and conscious the collective unconscious. He believed that the role of the unconscious is to act compensatorily to the conscious contents of the moment.

The second type of unconscious is the collective unconscious which contains all of the legends and myths of human kind as well as the inherited and ominous. Dreams and fantasies are filled with “primary propensities of forms of thought and feeling and everything about which men are universally agreed or which is universally understood, said, or done (McGowan, 1994). Dreams present messages of symbols and warnings from the collective unconscious attempting to reach consciousness. Jung believed that dreams reflect the dreamer’s life situation until the dreamer decides to become concerned with it.

According to Jung, the initial dream which occurs the night before therapy is thought to have significance because the act of attending therapy can produce a strong impulse for the appearance of the dreamer’s conflict and can even provide solutions for the conflict, possible obstacles, and even a final result. He placed special importance on the repetition of certain dreams, especially those in which the dreamer deals with the same conflict but from different perspectives. The sequence of events in the dream is also important in understanding the meaning of the dream.

Jung developed a theory on the structure of dreams and most importantly is the end of the dream because the dreamer is unable to consciously influence the outcome or change the end of the dream and thus reflect real situations. Jung believed in two kinds of dreams which were classified based on the information presented initially by the dreamer: favorable which offered the best solutions to solving conflicts and unfavorable which were viewed as a warning sign (McGowan, 1994). Both Freud and Jung believed that there was value in discussing and determining the role of dreams in therapy.

Freud and Jung agreed that there is significance in the patient-therapist relationship and therefore the impact on the interpretation of dreams. They agreed that in order for a dream interpretation to take place the dreamer but provide their full cooperation, actively participate, and hold nothing back (Lear, 2005). Although Jung was a student of Freud, he influenced Freud’s dream analysis based on his associations experiment. Jung proved that a dreamer’s associations which are any ideas that the dreamer thinks of when describing certain parts of the dream are essential to understanding the underlying content of the dream.

In order to correctly interpret a dream Jung believed the analyst must know the dreamer’s current situation in life and Freud believed it was necessary to evaluate the dreamer’s psychological background. Although, they may have used different words to describe essentially the same thing, they agreed that once the analyst has determined a potential meaning for the dream they must also determine its relativity and connectedness to the dreamer’s life.

Ultimately, Freud and Jung believed that there was significance to the interpretation of dreams in therapy due to the belief that dreams are a representation of conflicts and also the importance of evaluating a dreamer’s associations to determine the underlying meaning of the dream (Lear, 2005). While Freud and Jung had similarities in their dream analysis, they too had many differences. Freud’s interpretation of dreams focused on what the underlying cause of the dream was and that dreams are a representative way of acting on internal stimuli which represented unsatisfied wishes (Lear, 2005).

Jung was not concerned with the causality of dreams but the purpose of dreams and their intended effects on the dreamer. He interpreted dreams based on his belief in the second type of unconscious content: the collective unconscious which stated that all dreams essentially have fundamental meanings or certain characteristics for common reactions to situations. For example, someone who lost someone close to them who displays their grief openly has a fundamental meaning that causes others to express pity for them.

Jung also believed that dreams presented a parallel to the conscious in that it is nearly impossible to think of anything else when dealing with a conflict and searching for a solution and that dreams allow this process to continue automatically (McGowan, 1994). Another major difference between Freud and Jung was how they used information gathered during the interpretation of dreams. Freud viewed dreams in the sense that they represented a conflict, or suppressed unsatisfied wish that needed to be answered whereas Jung’s focus was on searching for solutions to conflicts that were already expressed within the dream.

Despite their differences in theory and interpretation of certain aspects of dreams, both Freud and Jung were able to make great strides in their works with dream analysts and leave behind invaluable information for other psychoanalysts to grow and develop from. Their continual placement of high importance on the patient-therapist relationship and the value of dreams in therapy have continued to be of importance to those who have studied their methods.

Their differences in approach to determining the cause and or purpose of the dream and the acquisition of information interpretation layed the foundation for other psychoanalysts to explore, expand, and dispute their theories, thus furthering the APA’s body of knowledge regarding dream analyst. 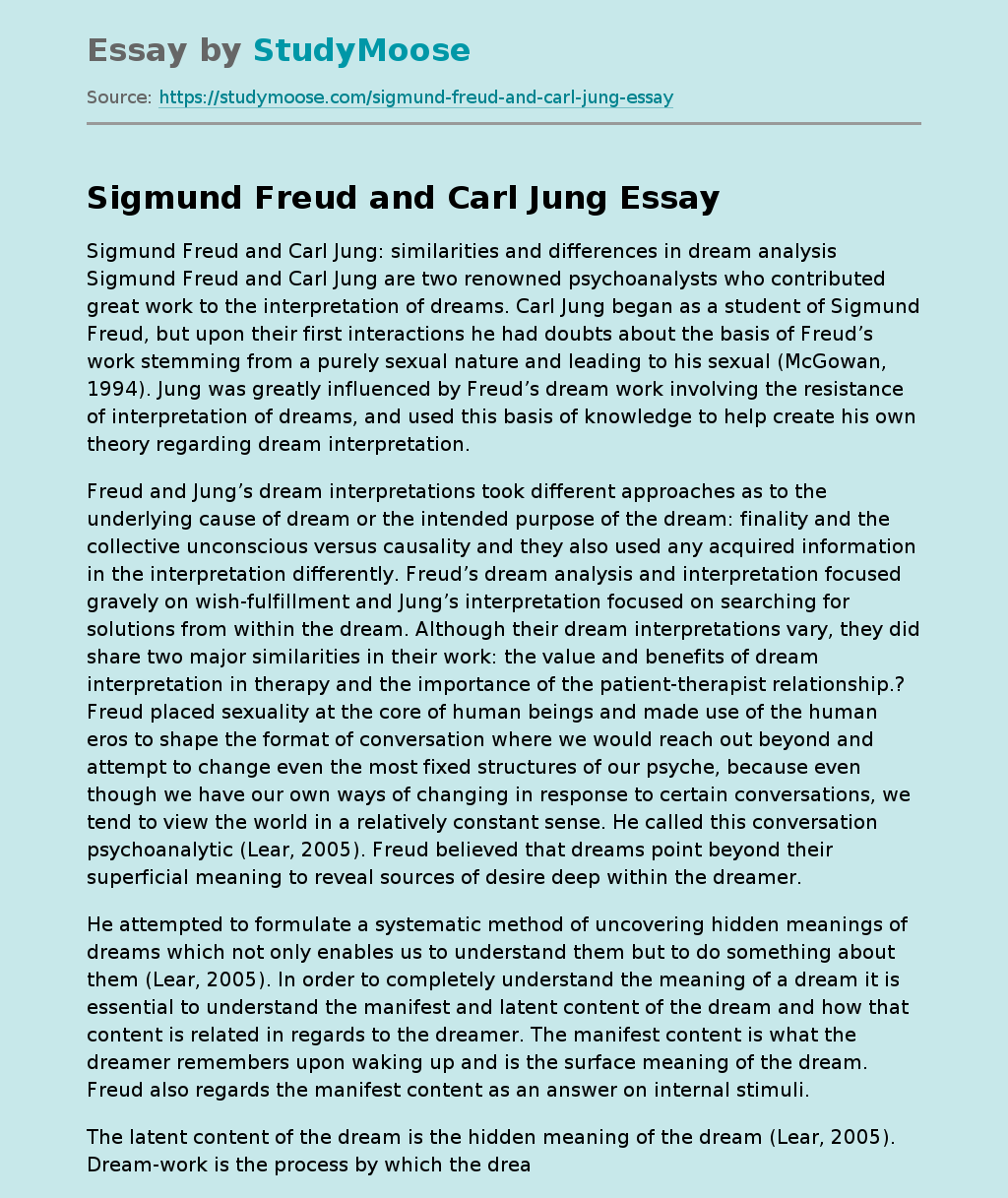