Carl Jung is an expert in freudian theory but with a strong sense of the unconscious and its habit of revealing itself in symbolic form. His personality theory “The persona” is an archetype, or an organized principle based on things we see or do. Hamlet is an example of a person who is doing whatever it takes to accomplish what he thinks is right. Claudius gives a “false impression” that he uses to manipulate people’s opinions towards Hamlet.

Through the physiological lens of Carl Jung, Hamlet comes off as insane trying to avenge his fathers death, while Claudius is the one trying to convince everyone he’s mad, to take his rightful place as king.

Don't use plagiarized sources. Get your custom essay on
“ Hamlet Literary Analysis ”
Get custom paper
NEW! smart matching with writer

Hamlet displays false impressions by pretending to be mad. He does this in order to get attention from his mother, who does not believe him when he tries to explain to her what the ghost told him about Claudius. Hamlet in despair thought that his plans were pointless and did not know what to do without the support he needed from his mother.

This shows the ego nature of Hamlet. Hamlet is young and focuses a great deal on his ego and worries about the trivialities of the persona displaying his false impressions. Hamet only false impression. Hamlet was deceitful, he would create spectacles in which people would misinterpret his actions for someone who might be insane. “To be or not to be, that is the question” (III, i, 56) This is the question Hamlet is contemplating throughout the book, to live, or to die.

He struggles with the thought of suicide many times as a result of no one believing him.

Pretending to be mad is the only way he can come up with to try to avenge his fathers death. This quote emphasizes Hamlets inner struggle to cope with two opposing thoughts in his mind, preserving his moral integrity or avenging his father’s death. It’s hard to say if Hamlet is ever really insane in the play. He struggles with life changing decisions that can potentially change many lives, which would be good reasoning for causing madness. There are many points where you might believe Hamlet himself doesn’t even know the difference between who he is and who is is pretending to be.

In order to keep his crown on the throne of Denmark, Claudius manipulates events, people’s lives and relationships. He makes use of his power along with other’s loyalty and trust. We know Hamlets hatred towards Claudius, for marrying his mother and trying to steal his place as king. But Hamlet is the only one who believes this, everyone else isn’t aware of his intentions. It is clear that we are intended to see Claudius not as a murderous villain, but a multi-faceted villain: someone who cannot refrain from doing what he feels is right.

He is morally weak, and content to trade his humanity for very little. Claudius shows a strong false impression, proved by Carl Jung’s theory to be a “mask” used to present himself to the world. He’s trying to replace the King by taking everything that was his. “Though yet of Hamlet our dear brother’s death The memory be green, and that it us befitted To bear our hearts in grief and our whole kingdom To be contracted in one brow of woe,Yet so far hath discretion fought with nature That we with wisest sorrow think on him,Together with remembrance of ourselves”(1.2. 1)

Here Claudius is talking to his people about how they should be mourning Old King Hamlet’s death, but it would be wise for the whole kingdom to move on quickly. This is part of the “mask” he is wearing for the people, considering hes the one who killed the King in the first place. Carl Jung’s theory proves itself to be true for both Hamlet and Claudius in the Play. His theory on the persona representing your public image is different, but apparent for both of them.

For Hamlet, a false impression is apparent but for his gain only, He is pretending to be insane towards his mother because that the only way he feels he can get her attention. Claudius portrays a false impression towards all the people, because he is the only one that truly knows Hamlet is sane. His “mask” is to cover himself up for the Kings Murder. The truth comes out when its apparent He wants Hamlet killed. Jung states that at its worst, false impressions, can be mistaken, even by ourselves, for our true nature.

This happens to Hamlet as he mistakes himself for many things he is not. “If one does not understand a person, one tends to regard him as a fool. ” (Mysterium Coniunctionis). This relates to how everyone believes Hamlet is mad because they don’t understand what he saw and heard from his fathers ghost. Through the physiological lens of Carl Jung, Hamlet comes off as insane trying to avenge his fathers death and prove to his mother all he knows, while Claudius is the one trying to convince everyone he’s mad, to take his rightful place as king. 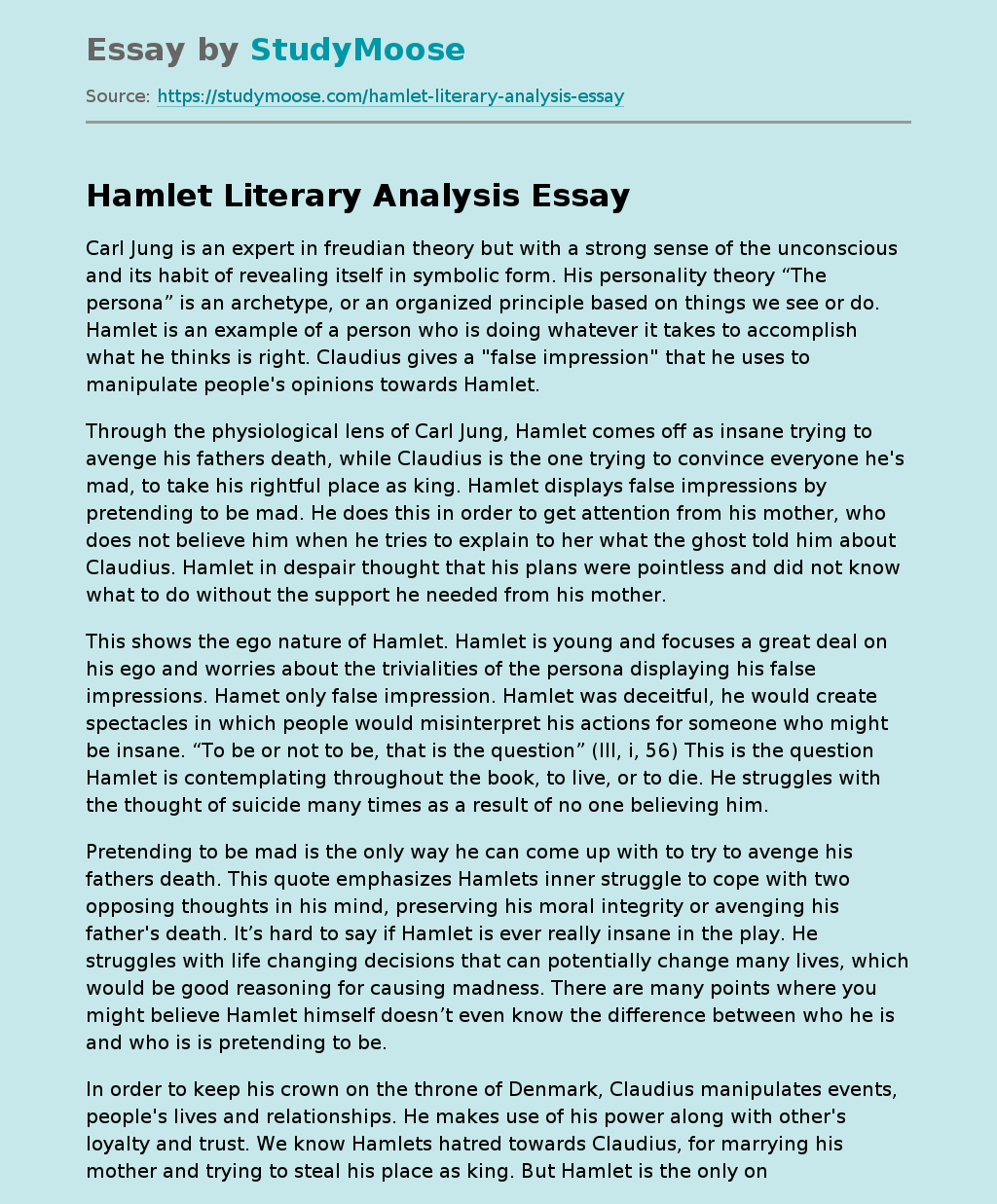