Carl T. Rowan (1925-2000) was born in Tennessee and received degrees from Oberlin College and the University of Minnesota. He worked for years as a columnist for the Minneapolis Tribune and the Chicago Sun Times, expressing his views of a variety of issues, especially race relations. Rowan also served as the director of the United States Information Agency and was the ambassador to Finland.

She was only about five feet tall and probably never weighed more than 100 pounds, but Miss Bessie was a towering presence in the classroom.

She was the only woman tough enough to make me read Beowulf and think for a few foolish days that I liked it From 1938 to 1942, when I attended Bernard High School in McMinnville, Tenn., she taught me English, history, civics—and a lot more than I realized.

I shall never forget the day she scolded me into reading Beowulf.
“But Miss Bessie,” I complained, “I ain’t much interested in it.”
Her large brown eyes became daggerish slits.

“Boy,” she said, “how dare you say ain’t to me! I’ve taught you better than that.
“Miss Bessie,” I pleaded, “I’m trying to make first-string end on the football team, and if I go around saying ‘it isn’t’ and ‘they aren’t,’ the guys are gonna laugh me off the squad.”
“Boy,” she responded, “you’ll play football because you have guts. But do you know what really takes guts? Refusing to lower your standards to those of the crowd. It takes guts to say you’ve got to live and be somebody fifty after all the football games are over.

I started saying “it isn’t” and “they aren’t,” and I still made first-string end—and class valedictorian—without losing my buddies’ respect. During her remarkable 44-year career, Mrs. Bessie Taylor Gwynn taught hundreds of economically deprived black youngsters—including my mother, my brother, my sisters, and me. I remember her now with gratitude and affection—especially in this era when Americans are so wrought-up about  “rising tide of mediocrity” in public education and the problems of finding competent, caring teachers. Miss Bessie was an example of an example of an informed, dedicated teacher, a blessing to children and an asset to the nation.

Born in 1895 in poverty, she grew up in Athens, Ala., where there was no public school for blacks. She attended Trinity School, a private institution for blacks run by the American Missionary, and in 1911 graduated from the Normal School (a “super” high school) at Fisk University in Nashville. Mrs. Gwynn, the essence of pride and privacy, never talked about her years in Athens; only in the moments before her death did she reveal that she had never attended Fisk University itself because she could not afford the four-year course.

At Normal School she learned a lot about Shakespeare, but most of all about the profound importance of education—especially for people trying to move up from slavery. “What you put in your head, boy” she said, “can never be pulled out by the Ku Klux Klan, the Congress, or anybody.”

Miss Bessie’s bearing of dignity told anyone who met her that she was “educated” in the best sense of the word. There was never a discipline problem in her classes. We didn’t dare mess with a woman who knew about the Battle of Hastings, the Magna Carta, and the Bill of Rights—and who could also play the piano.

This frail-looking woman could make sense of Shakespeare, Milton, Voltaire, and bring to life Booker T. Washington and W. E. DuBois. Believing that it was important to know who the officials were that spent the taxpayers’ money and made public policy, she made us memorize the names of everyone on the Supreme Court and in the President’s Cabinet. It could be embarrassing to be unprepared when Miss Bessie said, “Get up and tell the class who Frances Perkins is and what you think about her.”

Miss Bessie knew that my family, like so many others during the Depression, couldn’t afford to subscribe to a newspaper. She knew we didn’t even own  radio. Still, she prodded me to “look out for your future and find some way to keep up with what’s going on in the world.” So I became a delivery boy for the Chattanooga Times. I rarely made a dollar a week, but I got to read a newspaper every day.

Miss Bessie noticed things that had nothing to do with schoolwork, but were vital to a youngster’s development. Once a few classmates made fun of my frayed, hand-me-down overcoat, calling me “Strings.” As I was leaving school, Miss Bessie patted me on the back of that old overcoat and said, “Carol, never fret about what you don’t have. Just make the most of what you do have—a brain.”

Among the things that I did not have was electricity in the little frame house that my father had built for $400 with his World War I bonus. But because her inspiration, I spent many hours squi9nting beside a kerosene lamp reading Shakespeare and Thoreau, Samuel Pepys and William Cullen Bryant.

No one in my family had ever graduated from high school, so there was no tradition of commitment to learning for me to lean on. Like millions of youngsters in today’s ghettos and barrios, I needed the push and stimulation of a teacher who truly cared. Miss Bessie gave plenty of both, as she immersed me in a wonderful world of similes, metaphors, and even onomatopoeia.

She led me to believe that I could write sonnets as well as Shakespeare, or iambic-pentameter verse to put Alexander Pope to shame. In those days the McMinnville school syst4em was rigidly “Jim Crow,” and poor black children had to struggle to put anything in their heads. Our high school was only slightly larger than the once t-typical little red schoolhouse, and its library was outrageously inadequate—so small, I like to say that if two students were in it and one wanted to turn a page, the other one had to step outside.

Negroes, as we were called then, were not allowed in the town library, except to mop floors or dust tables. But through one of those secret Old South arrangements between whites of conscience and blacks of stature, Miss Bessie kept getting books smuggled out of the  library. That is how she introduced me to the Brontes, Byron, Coleridge, Keats, and Tennyson. “If you don’t read, you can’t write, and if you can’t write, you might as well strop dreaming,” Miss Bessie once told me.

So I read whatever Miss Bessie told me to and tried to remember the things she insisted I store away. Forty-five years later, I can still recite her “truths to live by,” such as Henry Wadsworth Longfellow’s lines from “The Ladder of St. Augustine:” `

The heights by great men reached and kept
Were not attained by sudden flight.
But they, while their companions slept,
Were toiling upward in the night.

Years later, her inspiration, prodding, anger, cajoling, and almost complete infusion of learning finally led to that lovely day when Miss Bessie dropped a note saying, “I’m so proud to read your column in the Nashville Tennessean.”

Miss Bessie was a spry 80 when I went back to McMinnville and visited her in a senior citizens’ apartment building. Pointing out proudly that her building was racially integrated, she reached for two glasses and a pint of bourbon. I was momentarily shocked, because it would have been scandalous in the 1930s and ‘40s for word to get out that a teacher drank, and nobody had ever raised a rumor that Miss Bessie did.

I felt a new sense of equality as she lifted her glass to mine. Then she revealed a softness and compassion that I had never known as a student. “I’ve never forgotten that examination day,” she said, “when Buster Martin held up seven fingers, obviously asking you for help with question number seven, ‘Name a common carrier.’ I can still picture you looking at your exam paper and humming a few bars of ‘Chattanooga Choo Choo.’ I was so tickled I couldn’t punish either of you.”

Miss Bessie was telling me, with bourbon-laced grace, that I never  her for a moment.
When Miss Bessie died in 1980 at age 85, hundreds of her former students mourned. They knew the measure of a great teacher: love and motivation. Her wisdom and influence had rippled out across generations.

Some of her students who might normally have been doomed to poverty went on to become doctors, dentists, and college professors. Many, guided by Miss Bessie’s example, became public school teachers.

“The memory of Miss Bessie and how she conducted her classroom did more for me than anything I learned in college,” recalls Gladys Wood of Knoxville, Tenn., a highly respected English teacher who spent 43 years in the state’s school system. “So many times, when I faced a difficult classroom problem, I asked myself, How would Miss Bessie deal with this? And I’d remember that she would handle it with laughter and love.

No child can get all the necessary support at home, and millions of poor children get no support at all. This is what makes a wise, educated, warm-hearted teacher like Miss Bessie so vital to the minds, hearts, and souls of this country’s children.

1. What is Rowan’s purpose in describing Miss Bessie? What makes this teacher significant to a middle-aged man?

2. What qualities of Miss Bessie does Rowan admire?

3. Does Rowan offer Miss Bessie as a role model? How does he demonstrate that she is an “asset” to the nation?

1. Rowan opens his essay with a physical description of Miss Bessie. Why are these details important to his purpose?

2. Why would this article appeal to readers of Reader’s Digest? What values does it reinforce?

3. Critical Thinking: Would some people object to Rowan’s article as being sentimental. Why or why not? Does this article suggest simple solutions to complex problems? Would a Miss Bessie be able to succeed in a modern urban high school?

1. Study the words Rowan uses in describing Miss Bessie. Which words have the most impact?

2. Rowan includes dialogue in his article. What d you notice about Miss Bessie’s language? What does this add to the description? 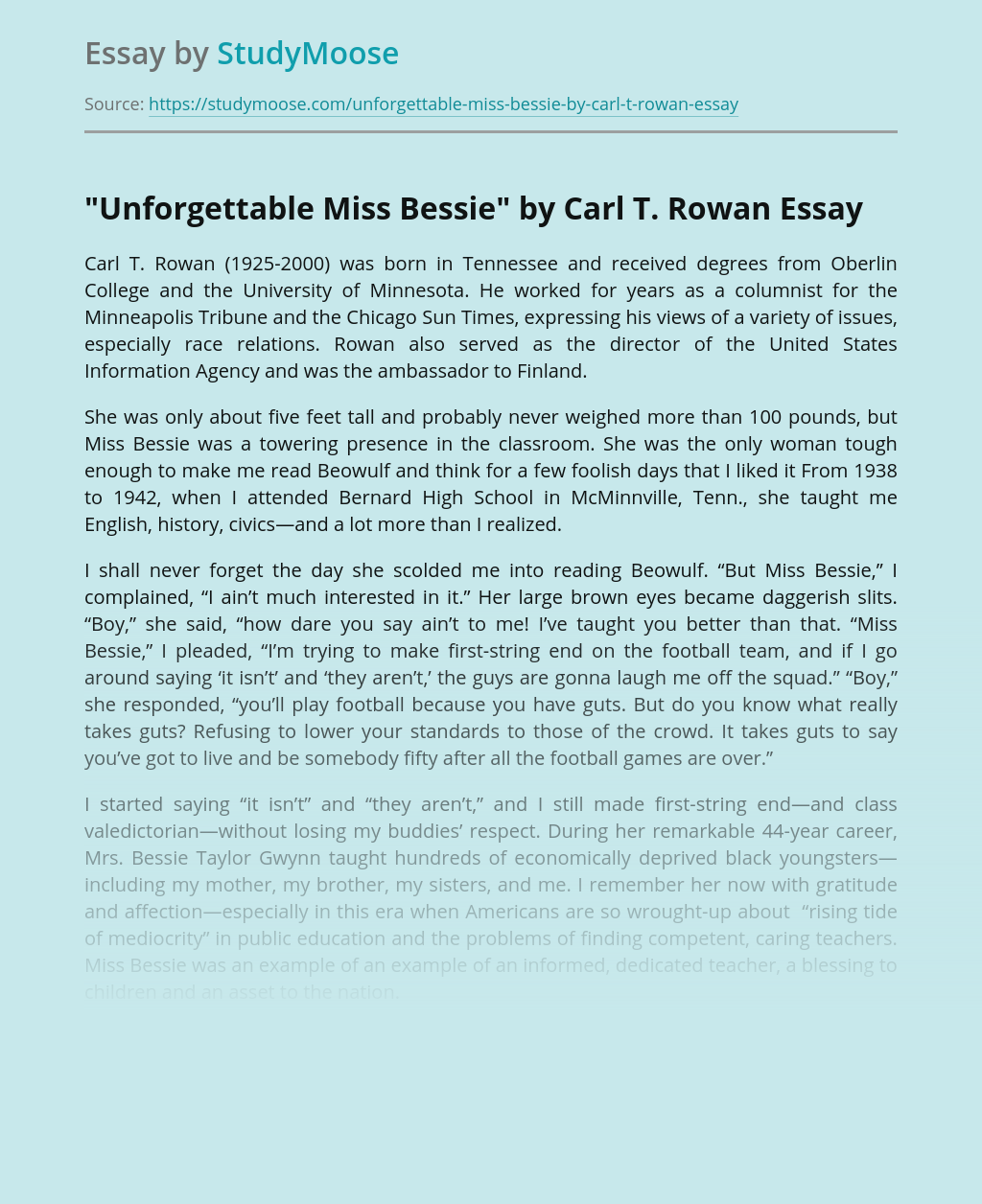