The most apparent similarity between these two films is that both films revolve around the daily lives of the main characters.

The main characters, Charlie and Mr. bean, in The Kid and Mr. Bean – The Ultimate Disaster Movie respectively, both have child-like qualities, and the tendency to be rather mischievous. Mr. Bean is naive and self-centered, sometimes to the extent of becoming somewhat mean. Despite his considerable age, he still sleeps cuddled up with his teddy bear. Nothing is sacred to him, and he plays his games with an earnest sheepishness.

Don’t waste time
Get a verified expert to help you with Charlie Chaplin’s “The Kid” and Rowan Atkinson’s “Mr. Bean”
Hire verified expert
$35.80 for a 2-page paper

His childish directness and honesty, while offensive at times, are his sharpest weapons. The little adventures he gets into usually revolve around the foibles of British life and the comedy of embarrassment. He is practically friend-less (save for his teddy bear), and is an outcast, just like Charlie, the main character of The Kid.

Charlie is a tramp living in the slumps of South London who, while walking around one day, stumbles upon a crying baby that had been abandoned on a heap of garbage.

Instead of ignoring the desperate cries of the infant or throwing it into the nearest sewer, he displays the more compassionate side of human nature by taking the baby with him and caring for it like a father. When the child is taken is away from him, he naturally gets very upset, and with a child-like recklessness, embarks on a journey to get him back, a process which includes pursuing the orphanage van over rooftops to descend into the back of the truck, then dispatching the official who had taken the child away.

These two characters are also similar in their disregard for established values and the possible consequences of their actions. Their quaintness manifests itself in the unconventional way in which they analyze and then try to make the best out of whatever situation they find themselves in, clearing obstacles and solving problems that come, “their way”, with a have a never-say-die attitude in their attempts to somehow belong to the society.

Both films, being formalistic, reflect the condition of the society at the particular point of time it was made; these “raw materials” have been slightly distorted, with symbolism and visual exaggeration being used to bring out the core messages their creators aimed to convey to the viewers, while giving the films a comic effect.

As Mr. Bean – The Ultimate Disaster Movie was a more recent film – The Kid was made several decades prior to it; the technology available to the creators of each film differed greatly. At the time of The Kid’s production, a thing such as colour television was not heard of and sound had not yet been introduced into the production of films; The Kid was a silent, black-and-white film while Mr. Bean – The Ultimate Disaster Movie was one with colour, sound, and certain special effects such as having its main character, Mr. Bean, falling from the sky as the credits rolled. It would be impossible to create such effects in Charlie Chaplin’s time.

Also due to the different eras in which these films were made, the scenario of each plot also differed. In the case of The Kid, it was a film made in the era of the Great Depression and the aftermath of World War 1, and with the twin themes of emotional loss and homelessness being haunting motifs in its plot, it is a poignant social commentary – of the displaced refugee children of World War 1, and for the persons grieving for loved ones whose lives were sacrificed in that war. The opening title, “A comedy with a smile–and perhaps a tear”, sums it up. This film addressed social and political issues of the day, and that was an admirable feat in itself considering the fact that this film did not have the advantage of synchronized sound for dialogue nor colour for its images.

Mr. Bean – The Ultimate Disaster Movie, on the other hand, has its plot based on a much lighter theme. It generally pokes harmless fun at the ‘rigid’ and ‘uptight’ stereotype we have of Englishmen by first depicting a typical Englishman, Mr. Bean himself, in a typically ‘English’ environment, then later putting him in an ‘international’ environment. Being release in 1997 it is a light-hearted satire of how the more conservative English society reacts to and attempt to adapt to rapidly changing international standards and the shifts in power.

The main difference of these two movies is that The Kid aims to bring some cheer to its audiences’ hearts by showing how joy can still be found in the gloomiest conditions (as depicted in the daily lives of Charlie and the child he has adopted) and also to reflect the state of the society while Mr. Bean – The Ultimate Disaster Movie seeks to bring some comic relief into the highly stressful lifestyle of the modern-day individual, by actually letting them laugh at a highly exaggerated, and therefore comic, version of ‘themselves’.

As mentioned earlier, the era in which Charlie Chaplin’s The Kid was made did not allow for colour or sound to be incorporated into its production. Being disadvantaged in this area, the actors in the film had to make up for it by emphasizing on facial expressions and body movements, in order to express thoughts and emotions, and also to portray certain unique mannerisms and character traits of the various characters in the story. Modern-day audiences who are unaccustomed to this form of acting might feel uncomfortable viewing films from the silent era, because the actors may seem to them, to be over-acting to an outrageous degree.

However, it is also due to the same reason as to why silent movies tend to be more popular than modern-day comedy as overacting is a natural form of comedy. One example would be the fight scene in which Charlie defends the child from the Bully. The moves require both grace and precise comic-timing; Chaplin’s talent was apparent in this scene as he manages to make even a brawl seem funny without the use of colour, sound or special effects. Title were also edited to clarify the on-screen situation to the viewers or add critical dialogue when there was an absolute need to.

As for Mr. Bean – The Ultimate Disaster Movie, dialogue is being kept to a minimum. The creators of this movie probably wanted the focus of the viewers’ attention to be Mr. Bean’s immature, self-centered, and sometimes outright mean persona and how these character traits of his actively contribute to the various sticky situations he often finds himself in. The dialogue in this film is mainly used to depict his mood or immediate response to certain occurrences, and from that, the viewers form a deeper impression of his character. Dialogue is seldom used to make known to the audience the plans the characters has in mind to tackle his problems. Mr. Bean almost always executes his impractical ideas and solutions immediately after he is faced with the problem.

This deliberate lack of dialogue somehow suggests the unwillingness to share ideas, the impulsiveness to carry out ideas without consultation, and the complete disregard for the welfare and feelings of others that will be affected by his actions. Suitable sound effects were used to further enhance the various moods of the scenes and these sounds also give viewers a clue of the magnitude and severity of the situation Mr. Bean has once again landed himself in.

Both films make use of physical comedy extensively to bring out the comic aspects of their respective characters. The signature “French-kick” displayed by Charlie when he was with the child was one example. Throughout the movie The Kid, this “French-kick” motion of Charlie’s is being executed frequently; other actions of this sort are often employed to enhance the overall comic aspect of the movie. In Mr. Bean – The Ultimate Disaster Movie, the use of physical comedy was also evident throughout the entire show, with Mr. Bean trying to resolve his perpetually unceasing string of problems with a clumsy and impractical style of doing so, a style that is typically his.

The characters in The Kid had to endure poverty, homelessness, and extreme loneliness; they are exposed to the harsher aspect of life. Mr. Bean, however, had a job and a decent place to live in; the only unhappy moments he ever experiences are when his plans backfire. These moments of unhappiness are very short-lived. Therefore the characters in Chaplin’s film definitely possessed more emotional depth than those in Rowan Atkinson’s movie. 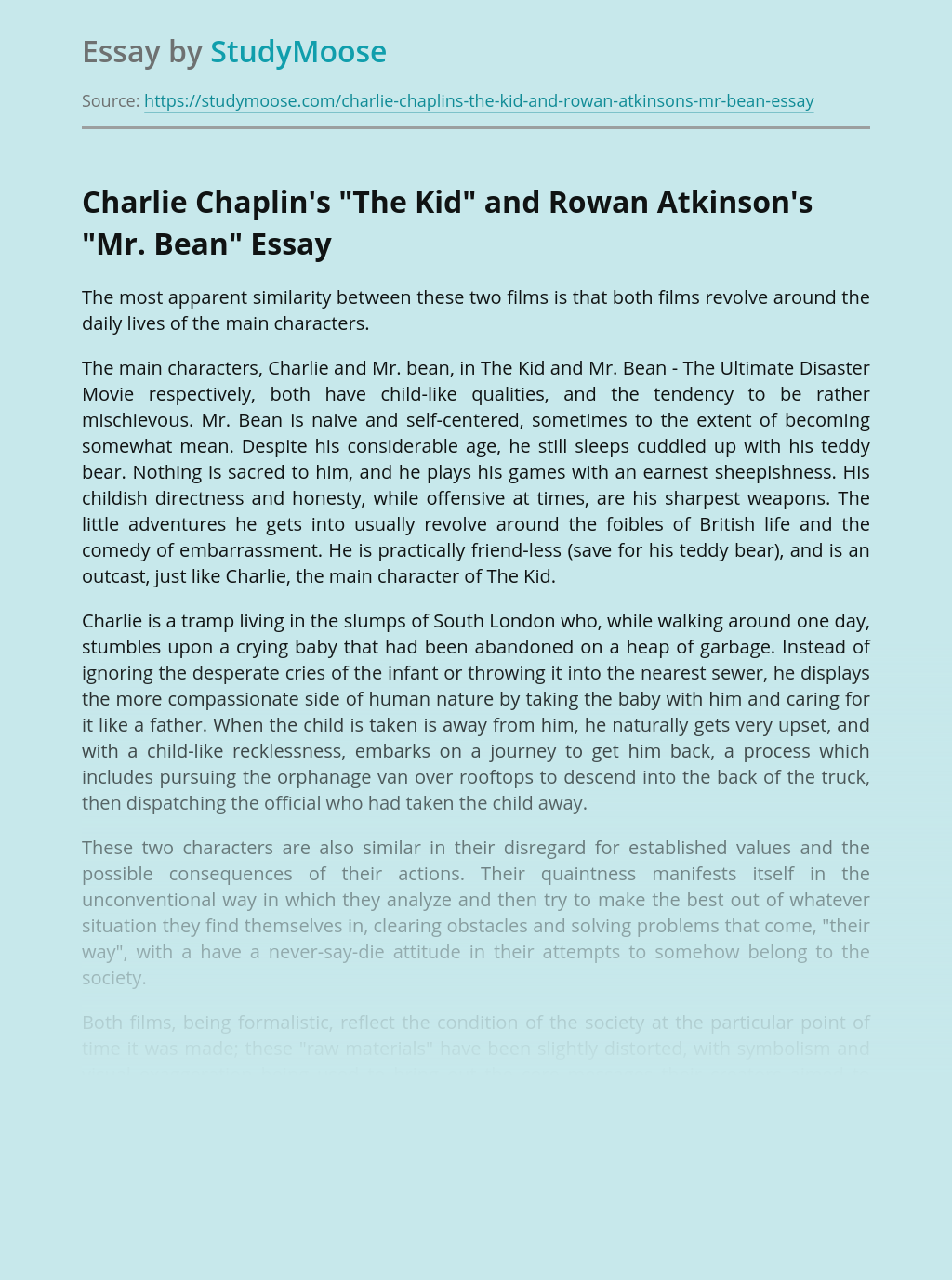