The Diary of a Wimpy kid is a book about adolescence who have dealt with emotional struggles and social acceptance in middle school. The book highlighted areas of struggle which included: bullies, emotional responses in both positive and negative ways, friendship, and family dynamics. The book was intended was readers of age seven and older but could be used a discussion book with children and dealing with social issues. The book genre is comedy and humor and is full of illustration to help the reader understand the concepts and lessons of the book.

Turn in your highest-quality paper
Get a qualified writer to help you with
“ Diary of Wimpy Kid Evaluative Essay ”
Get high-quality paper
NEW! AI matching with writer

It is written in simple words and would be a good read for children and early adolescence.

The book, The Diary of a Wimpy Kid, written by Jeff Kinney discussed many literary elements while its ultimate theme was humor. The book included topics about friendship, family, middle school, peer pressure, social acceptance and faux pas, and morality issues. The book had been written in the genre of comedy and was intended for readers between the ages of seven and older.

The book approached adolescence from a relatable standpoint with kids who attempted to gain a sense of value and self worth through social acceptance. The book was written very well and taught several valuable moral lessons that could be used for children to gain understanding about peer issues and consequence of actions.

The book had several strong characters that influenced the main character’s life. The first main character was Greg Heffley and the second was his best friend Rowley.

The story began with a diary that Greg had received from his Mother. Although he had been embarrassed by the gift, he decided to write down the stories of his daily life so that he could share it with people once he became rich and famous. Greg was portrayed as an extremely insecure kid who was desperate to be recognized and gain popularity. His insecurity manifested into his closest friendship and relationships through arrogance, criticism, lying, jealousy and pride.

An example of this was when Greg befriended Rowley. He reached out to him under the pretense that Rowley would be so blessed to be friends with him and befriended him out of a place of pity. Greg treated Rowley as a lesser and often times would do things to put him down just like his older brother would do to him. Rowley was completely the opposite. He happened to be very naive and childlike in many ways. He was a kid that was very secure in who he was and was not concerned with fitting into anything. He was genuinely loving and humorous, and because of that it attracted friendships and sometimes the occasional uninvited ridicule.The boys lives intertwined and eventually their friendship was tested. Greg lied to Rowley which had been motivated by jealousy because Rowley had become popular while Greg continued to go unnoticed. The author included the real emotional high’s and low’s of adolescent friendship through the two main characters.

The author wrote the book in a way that expressed the dynamics of friendship and social acceptance through comedy. Kinney made the characters very relatable and expressed the problems with adolescence trying to make sense of their emotions and solving their own problems (Kinney, 2010). In the story, Greg wanted to become popular and was doing everything he could to make that happen. With many failed attempts, constant bullying, and social ridicule he eventually joined the safety team with Rowley. Once they were on the team together they had been given the responsibility to to walk children home from school. The boys took ownership in there jobs but circumstances had interrupted Rowley’s service to the team. Rowley was not able to walk the kids home that afternoon but lent his jacket to Greg and insisted that he do it.

Later a kindergartener had been chased down while on Greg’s shift, but because he had worn Rowley’s jacket, it had been reported back to the school that Rowley was the problem. Later, Rowley received punishment and was no longer allowed to be a safety patrol kid. Greg was blinded by jealousy and so desperate for acceptance he figured he would do the “right thing” by covering his mistake and allowing his friend to take the fall (Kinney, 2010). His need to be accepted resulted in him betraying Rowley to maintain his small portion of position in the social scene. Later he confessed to Rowley that he had been the one to blame and did not apologize for what he had done but justified it. Greg felt entitled to his position and because they were friends he felt he could use Rowley and that would be accepted (Kinney, 2010).

The safety story did an excellent job of portraying how emotions can rule a person in a negative manner. It also demonstrated the desire for social acceptance and how people are willing to sacrifice the most valuable relationships to to gain popularity. The particular story was written in a way that really gave an accurate portrayal on the depth of the heart of adolescence when they are not properly guided and taught by the parents to help them understand the emotional issues of the heart (Park, 2009). The author used the portion of the story to help the reader discern good friendships from bad friendships and what character attributes friends should look for in one another. Once Rowley was informed of the truth he discovered that Greg was not a good friend. He recognized that Greg was selfish, jealous, prideful, and a person that would betray him. The revelation resulted in Rowley walking away from their friendship.

The unveiled truth about friendship left the reader to ponder the questions about their friendships and also the question of what kind of friend they are to other people. As the story continued the author showed the power of standing up for your friends and the power of forgiveness. The story picked up where Rowley and Greg were about to fight but were cornered by bullies that were going to force the boys to eat the slimed cheese from the basketball court. To touch the cheese would be social suicide to any student, but to eat it meant far worse. The bullies forced Rowley to eat the cheese but were chased off from a teacher before Greg had too (Wimpy greg, 2004). Once the students on the campus saw the cheese they began to crowd around Rowley to judge him and make fun of him. At that moment, Greg stepped up and took the fall for Rowley by telling the classmates that he had been the one that had touched the cheese. The kids fled from Greg but his relationship with Rowley was restored.

Once Greg was free from trying to fit in was when he became a real friend and a person of good character. The final portion of the story brought redemption to Greg’s character and demonstrated to the reader that it is never to late to do the right thing. As a result of making the right choice, Rowley forgave Greg, and Greg received the lesson that one good friend is more important that crowds of superficial people (Family, 2010). The portion of the story left the reader with the moral lesson that it is better to be yourself than trying to fit into a crowd and be someone you are not.

The book would be very appropriate for middle school kids because it discussed relatable issues and conflicts that could arise from trying to fit in or become popular. It gave several moral lessons to help the reader understand the dynamics to friendship and insecurities with school and growing up. The author did a great job of keeping the reader engaged by the comical illustrations and dialogue that happened between characters. He also portrayed the reality of common struggles in middle school and how critical it was to be true to oneself. The author summarized the book by having the two main characters resolve their conflict and accept who they were.

This book is a perfect example of societies condition. The story line may have been intended for middle school children, but society is the same way as adults. There is a need to be accepted, powerful, recognized, feeling entitled to things, people have used others as scapegoats, betrayal, jealousy, strife, revenge, and many other negative things. However, there was also the reality of forgiveness. Even today, when people forgive others, defend them, take accountability and ownership for mistakes, gain the wisdom that what they chase is not as important as money or fame, there is a place of resolution and resolve in peoples lives. While trying to chase after fame and sacrificing what is important there is a misery that follows, but the contentment comes after forgiveness and the understanding of what it important.

I think this book is a good read for kids. There are character issues and sin issues that I did not like, but it is a book that kids could read and grasp the moral roots of it. I think it would be beneficial for a parent to discuss the moral failures of the main character and give insight into what they should do to handle situations with similar circumstances. With older children, this would be a great book to read as a family and have a book study that would help kids recognize their own areas of weaknesses and temptations. I think the author did an excellent job adapting himself into the adolescent world while bringing humor and practical ways to make right decisions.

Kinney, J. (2010). Diary of a wimpy kid: a novel in cartoon.
Retrieved from http://www.scholastic.com/teachers/book/diary-wimpy-kid

Park, A. (2009). Diary of a wimpy kid: concept analysis. Retrieved from http://novelinks.org/uploads/Novels/DiaryOfAWimpyKid/Concept Analysis.pdf

Diary of Wimpy Kid Evaluative Essay. (2016, May 27). Retrieved from https://studymoose.com/diary-of-wimpy-kid-evaluative-essay 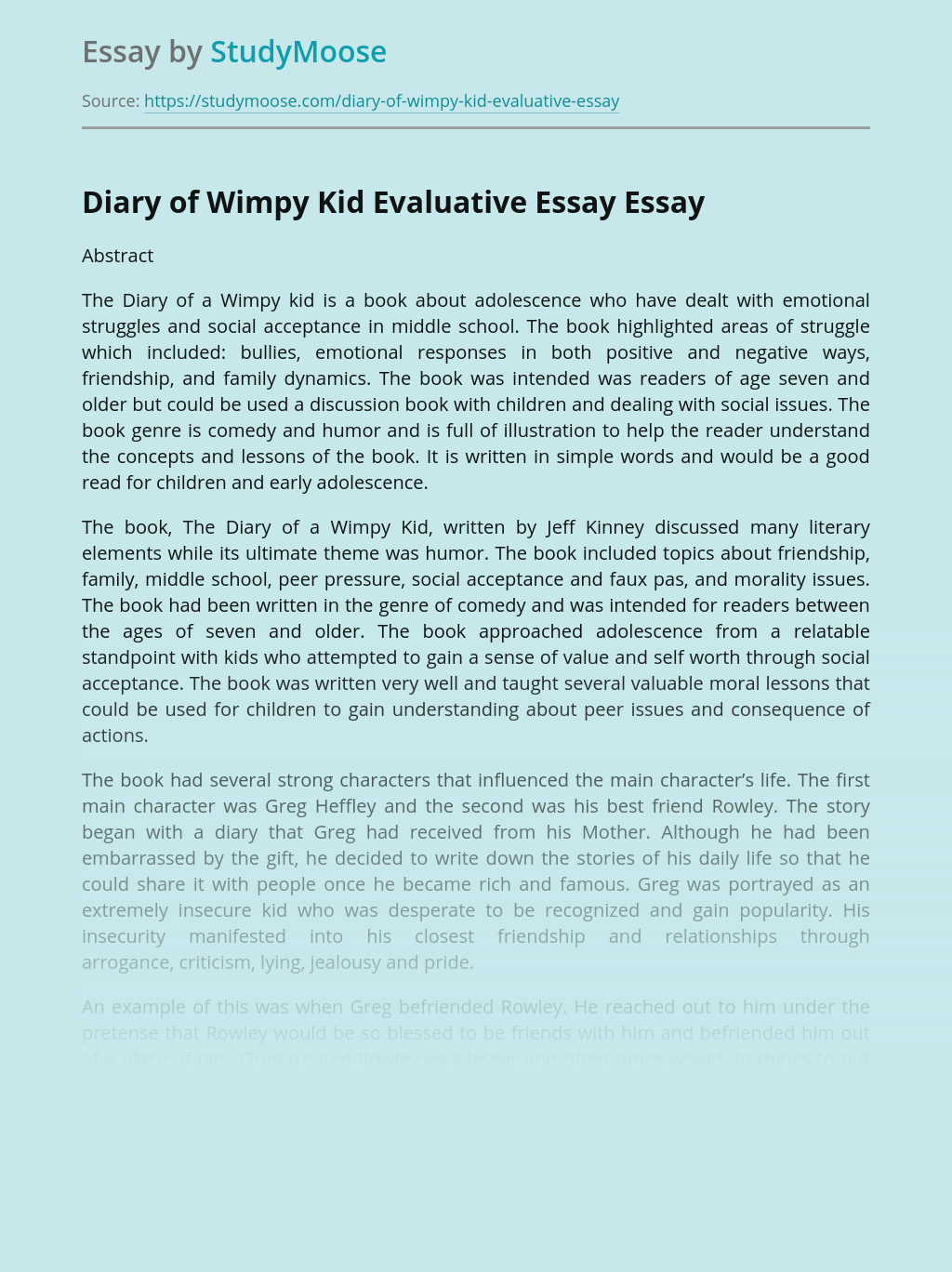 Turn in your highest-quality paper
Get a qualified writer to help you with
“ Diary of Wimpy Kid Evaluative Essay ”
Get high-quality paper
Helping students since 2015
Stay Safe, Stay Original