Race and Ethnicity in The Karate Kid Film

“Wax on-wax off” was the technique in the 1984 Karate Kid film which indeed caused a lot of amusement and delight in all the moviegoers who watched it air. This year’s remake is equally amusing as Jaden Smith captured the attention of many in his entertaining portrayal of the American kid alongside Jackie Chan. The entertainment value of this movie is very high as it brings the viewers to China, a country that is very rich in culture and the arts.

Don't use plagiarized sources. Get your custom essay on
“ Race and Ethnicity in The Karate Kid Film ”
Get custom paper
NEW! smart matching with writer

However, despite the movie’s aim to fully captivate the audience with the antics of the stars, it contained innuendos pertaining to transcultural diversity, ethnicity and race.

In the early part of the movie, Jaden Smith’s character already formed a general conslusion about China. He said that everything in China is old, from the houses to the people. This dialogue denotes an image that American kids seem to have about China which is perhaps attributed to the cultural diversity between the two countries.

The country’s preservation of their authentic houses and manner of dressing and practices may seem old to an American kid and was very much highlighted in the movie. The issue of ethnicity is in one way or another being confronted in the film. To use a Black-skinned kid in the movie is like a statement as it initially featured a White American Kid in the 1984 version.

It seemed to somehow lift the notion that the Blacks are always the ones causing trouble as they are most of the time depicted in some films.

The image of the Blacks as thugs and gang members in some films have formed the stereotype that they are the ones who are initiating fights and violence. In the movie, Jaden Smith seemed to uplift the Blacks as the Asians were the bullies in their movie. This was an attempt to dispose of the stereotypes about the Black Americans as the Asians were utilized to perform the act of bullying against the Karate Kid. Issues on race were also brought to the surface because of the movie. A lot of viewers seem to react negatively to the fact that the Americans were once again characterized as the superior race in the film.

It is in fact true as even the apartment rented by the mother and son characters carried the name “Beverly Hills Luxury Apartment”. This simply points out the impression that Chinese people imitate and aim to copy the American way of life as it is superior and better. Even the show on the television which featured the cartoon Sponge-Bob dubbed in Chinese, was an attempt to showcase how China is slowly becoming Americanized in more ways than one. Another feature in the film which reinforces this contention is the love interest of Jaden which is the Asian girl.

The Asian girl was very much enamored with the character of Jaden. This somehow suggests that Americans are very attractive to Asians in a way that they would prefer them over Asians like them. This is symbolic of the mentality that the West holds more opportunities and better things, making it very appealing to the dwellers of the Orient. Furthermore, the plot of the story which sported an American beating the Chinese in their own land, at their own martial arts technique, in a short period of time, seems to highlight the undertone that Americans are a better race amongst all.

The beauty of China and it’s diverse culture was given emphasis and it contributed to the overall cinematic effect of the film. The passion of the people with regards to their art and traditional practices is very captivating and refreshing. However, much as choosing China as a setting added to the aesthetic value of the film, it deviated from the very title that it carried. The movie was called “Karate Kid” and karate is a martial arts technique by the Japanese. The technique in the movie was Kung Fu which is Chinese rather than Japanese. Karate Kid is something that should be watched without much intellectual thought because if properly

Race and Ethnicity in The Karate Kid Film. (2016, Sep 22). Retrieved from https://studymoose.com/race-and-ethnicity-in-the-karate-kid-film-essay 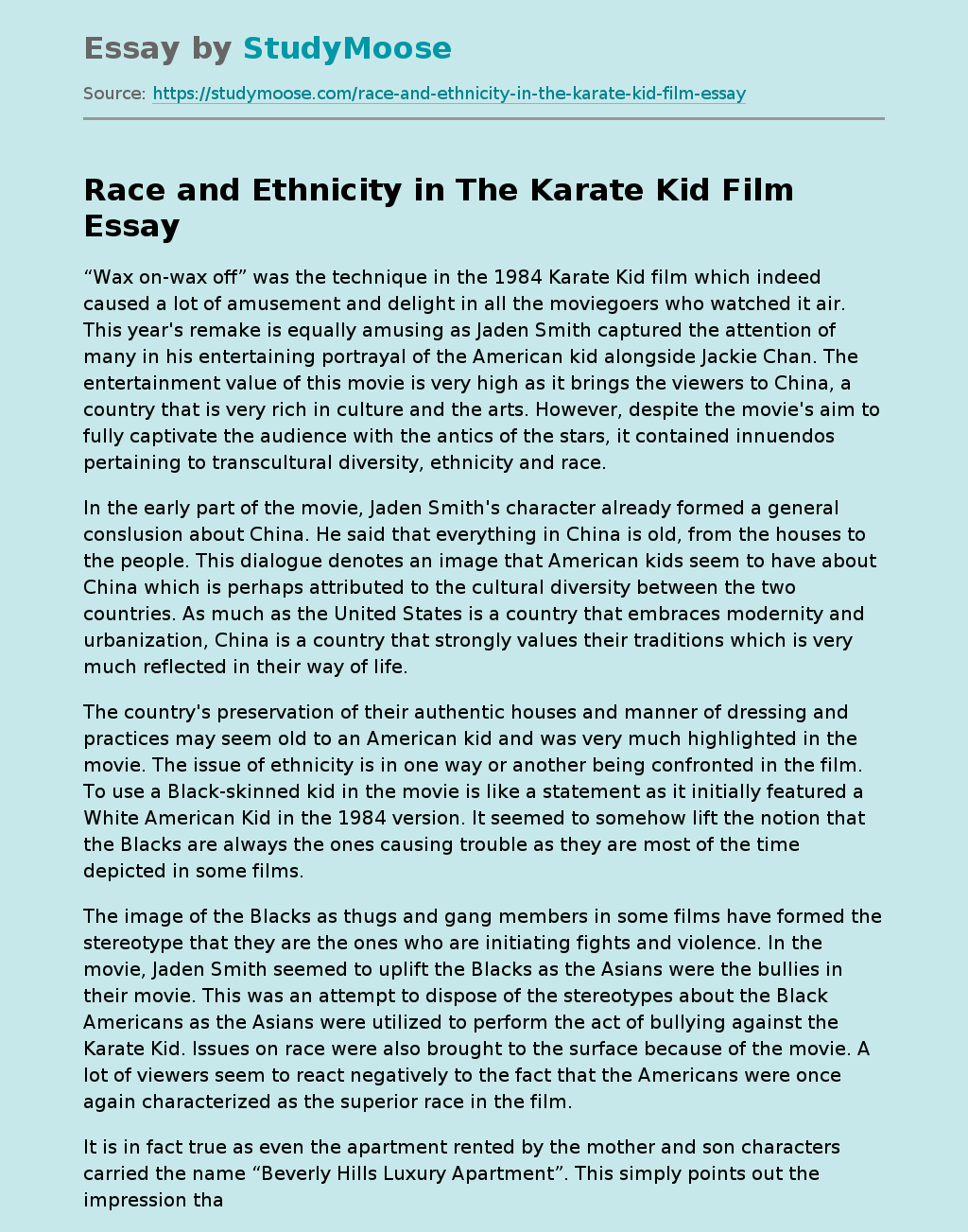