The Constructionist Theory of Race, Ethnicity, and Culture

Race, ethnicity, and culture are terms in which resonate throughout American society. Sometimes these words are often overlooked and thrown out due to their negative historical background. Joane Nagel takes the plunge in an effort to determine the true essence of ethnicity and culture in her work, “Constructing Ethnicity: Creating and Recreating Ethnic Identity and Culture.

” She says the constructionist view is that “the origin, content, and form of ethnicity reflect the creative choices of individuals and groups as they define themselves and others” (Nagel, 237) This idea is far different from that of Omi and Winant’s essentialist theory that race is socially constructed theory.

Don't use plagiarized sources. Get your custom essay on
“ The Constructionist Theory of Race, Ethnicity, and Culture ”
Get custom paper
NEW! smart matching with writer

Nagel would argue that individuals and ethnic groups are at the core of the true meaning of ethnicity and the construction of race and ethnicity is in the hands of the individuals themselves. The question remains, what are the ethnic boundaries to which we indentify people?

How can culture be used to describe ethnicity? Have we underestimated the power of social forces throughout the construction and reconstruction of ethnic identity? The fluid nature of ethnicity as described by Nagel, makes it a constantly changing force on culture, as opposed to Omi and Winant’s idea of ethnicity as a constant that is molded once and for all by societal forces.

Ethnicity is constantly being molded by people whether they are in the ethnic group or not, and there are no permanent boundaries to where ethnic identity can go.

Nagel writes, “Ethnicity is created and recreated as various groups and interests put forth competing visions of the ethnic composition of society and argue over which rewards or sanctions should be attached to which ethnicities” (Nagel, 239) It is not uncommon for people to reap the benefits of different ethnic groups.

For example, I myself am Caucasian by appearance yet I have a Cuban last name and my heritage indicates that I’m 50% Hispanic, and I fall into the classification as Hispanic/Latino. On my college transcripts and job applications I mark off the box next to Hispanic/Latino.

This gives me a distinct advantage in the recruiting process and especially my acceptance into a university. Unlike race and ethnicity, culture is said to unite groups of people according to similar beliefs and lifestyles such as religion. Thus, culture is more concrete than ethnicity and race, which were created through historical appropriation. Nagel introduces this idea of culture: “Culture is constructed in much the same way as ethnic boundaries are built, by the actions of individuals and groups and their interactions with the larger society.

Ethnic boundaries function to determine… the question: Who are we? Culture provides the content and meaning of ethnicity; it animates and authenticates ethnic boundaries by providing a history, ideology, symbolic universe, and the system of meaning. Culture answers the question: What are we? ” (Nagel, 251) People of all ethnicities and races can gather in one place at the same time and be seen as united, and they can practice their beliefs in a public setting. But, the places where we worship remain segregated.

Jewish people practice their cultural beliefs in synagogues, whereas Catholics practice their beliefs in church. Culture is a better gauge of one’s identity because it unifies people. Nagel indicates that part of the reason culture is a more accurate way of determining one’s identity is because individuals have the ability to pick and choose different cultural traits that they would like to incorporate into their lives. However, most cultural traits are born into people because of their parent’s beliefs and it is not until later in life that they are given the opportunity to make what they want of themselves.

In an effort to portray the cultural differences and the role that religion plays in a society, Grace Paley writes, “The Loudest Voice”, a story about a Jewish girl who is asked to be the narrator in her school’s Christmas play. Shirley Ambrowitz, the daughter of Jewish immigrants, lands the role because she has the loudest voice of all the student’s participating in the play. At first, her mother is reluctant to allow Shirley to participate in the play because she fears it will allow her to lose sight of her own faith. Nagel would have this to say about Mrs.

Ambrowitz’s reluctance: “Cultural revisions and innovations occur when current cultural elements are changed or when new cultural forms or practices are created. ” (Nagel, 252) Shirley’s mother is afraid of this happening, and doesn’t want her daughter being so caught up in the Christmas spirit during the time of the Jewish celebration of Hanukkah. Paley uses the example of the Christmas tree that is put up in Shirley’s neighborhood and how the townspeople don’t particularly appreciate the display. Shirley on the other hand blows a kiss to the tree and compares it to the “Jew in Egypt” as being a stranger in a strange land.

She appreciates the beauty of the Christmas season and all that comes with it, no matter what her religion is. Nagel has this to say about cultural construction: “The construction of history and culture is a major task facing all ethnic groups, particularly those that are newly forming or resurgent…The importance of cultural construction for purposes of community building is not limited to the creation of national unity. Cultural construction is especially important to pan ethnic groups, as they are often composed of subgroups with histories of conflict and animosity. ” (Nagel, 253-254) Shirley’s father would agree with Nagel’s assertion.

After the play he thinks Shirley did a wonderful job of keeping an open heart and mind to a story different from her own, while her mother ponders the question of why Jewish children were integrated into the play in the first place. Her father on the other hand believes that his daughter’s performance was a success and he compares Christmas and Hanukkah to their historical roots. He says, “What belongs to history, belongs to all men. ” (Paley, 203) Shirley is a prime example of how other cultural beliefs can be integrated into one’s own culture without ever losing our own sense of importance within our cultural beliefs.

“Just as ethnic identity results both from the choices of individuals and from the ascriptions of others, ethnic boundaries and meaning are also constructed from within and from without, propped up by internal and external pressures. For ethnic groups, questions of history, membership, and culture are the problematics solved by the construction process. ” (Nagel, 259) At the beginning of this essay, I posed numerous questions about ethnicity, race, and culture, and it seems as if all these questions still remain. It is a dilemma that has burdened philosophers and sociologists alike for quite some time now.

We can conclude that there is no true meaning of ethnicity, race, and culture, but they can all be intertwined within and throughout each other in an effort to uncover these meanings. This will continue to be a topic of importance within our society as we strive to become united as one. Works Cited Nagel, Joane. Constructing Ethnicity: Creating and Recreating Ethnic Identity and Culture. New York: New York University Press, 1998. Paley, Grace. The Loudest Voice. Imagining America, pages 199-204. On my honor, I have neither received nor given any unauthorized assistance on this assignment.

The Constructionist Theory of Race, Ethnicity, and Culture. (2016, Dec 14). Retrieved from https://studymoose.com/the-constructionist-theory-of-race-ethnicity-and-culture-essay 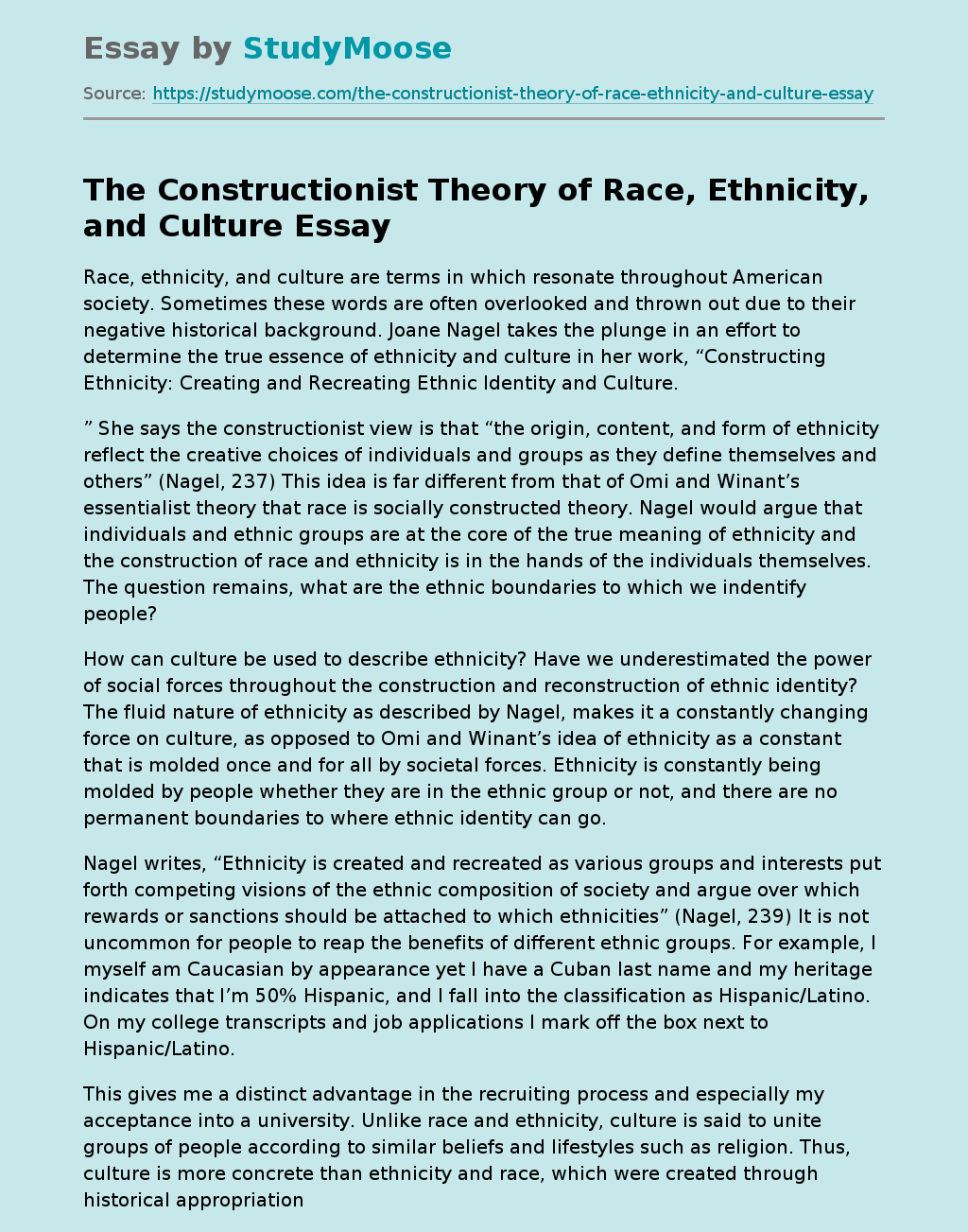